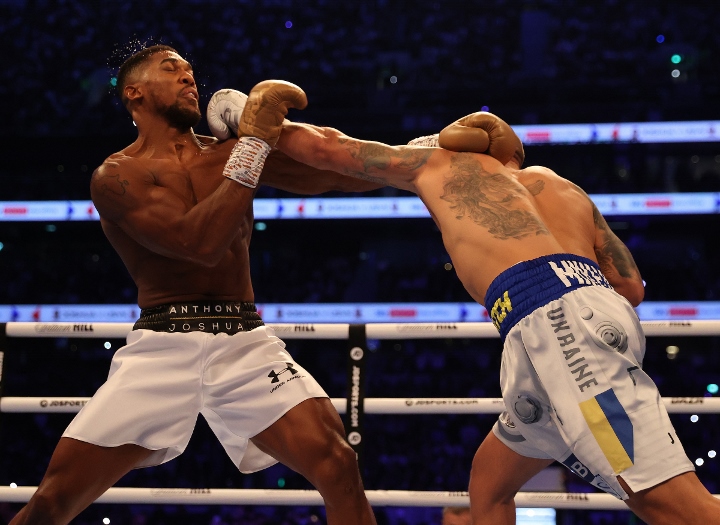 Tyson Fury’s co-promoter, Frank Warren, highly doubts that a British super-fight with Anthony Joshua will happen in the future.

On Saturday night at Tottenham Stadium, Joshua was clearly outboxed over twelve rounds by mandatory challenger Oleksandr Usyk, who walked away with the WBO, IBF, IBO, WBA heavyweight titles.

Entering that fight, many observers felt Usyk was too small to make a dent on the much bigger Joshua.

That wasn’t the case, as Usyk wobbled Joshua in the early going, outlanded him and had the British star in serious trouble in the twelfth and final round.

A few months ago, Fury was in serious negotiations to face Joshua on an August date in Saudi Arabia.

But, an arbitrator ordered Fury to honor a rematch clause due to Deontay Wilder.

Fury will defend the WBC title against Wilder on October 9 at T-Mobile Arena in Las Vegas.

The overall plan, was for Fury and Joshua to collide in the first half of 2022 – but the two boxers had to win their respective defenses to get there.

Joshua will likely face Usyk in a rematch in the first half of next year.

Even if he wins that rematch, Warren does not see a fight with Fury taking place.

“If it did happen, what would Tyson have done to him? It wouldn’t have gone 12 rounds. Tyson would have destroyed him. Absolutely. The unification fight was there, such a big fight. Heartbreaking.

“What would Tyson Fury had done to Joshua? A better chin, bigger puncher. Usyk is a good fighter, he boxed extremely well. But that was my thing about this fight – Joshua is so vulnerable. He’s been like that for ages.

“I thought Joshua would be too big for Usyk, but I knew if he was there at the end, then he’s been outboxed. Usyk nearly had him over at the end. He was gun shy. Never let his hands go. They can talk all they want about rematches. He’s just been totally exposed, like he was against Ruiz. How can he be getting outjabbed by Usyk, who was taking the fight to him? I was shocked at that. Even if he was to beat Usyk, what is Tyson Fury going to do to Joshua? You’d have your house on Tyson beating him.”