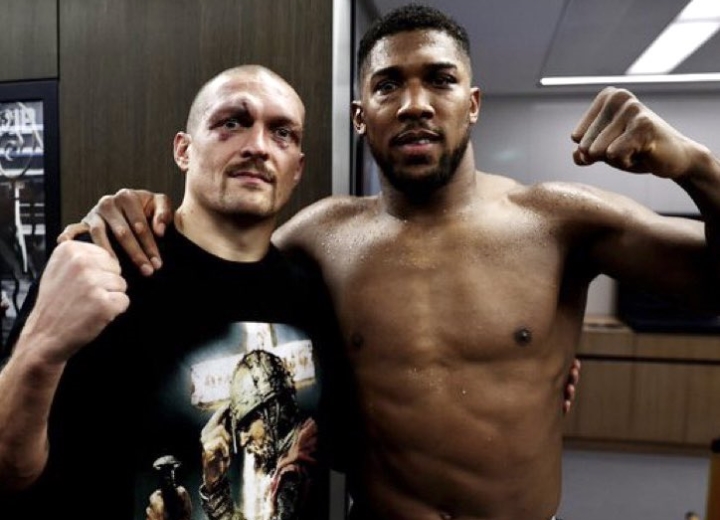 Eddie Hearn might attempt to talk Anthony Joshua into a confidence-building bout before the former heavyweight champion climbs into the ring to oppose Oleksandr Usyk again.

Hearn realizes, of course, that such advice probably will be ignored because Joshua will want to avenge his second professional defeat immediately. Joshua might’ve suffered a significant injury to his right orbital bone, but the British superstar was talking about boxing Usyk again as a physician examined the damage around his eye in Joshua’s locker room Saturday night in London.

The 31-year-old Joshua stated numerous times before he boxed Usyk that he would exercise his contractual right to an immediate rematch if Usyk upset him at Tottenham Hotspur Stadium. Joshua was nearly a 3-1 favorite, but Usyk unanimously out-pointed him in their 12-round fight for Joshua’s IBF, IBO, WBA and WBO championships.

“I think the rematch is very tough,” Hearn said during DAZN’s post-fight interview. “But there’s absolutely nowhere to hide, is there? You know, I mean, AJ is at the stage of his career, he wants his world championship. He’s already talking about it now. The doctors are trying to see to him. We have to check that eye socket. For me, it looks like it, you know, could be a damaged eye socket. He says no, he’s fine.

“He said he couldn’t see from about the ninth round, but you know, mainly because of the swelling. But, you know, he remained on his feet. For me, he will go straight into the rematch. You know, and we’ll discuss that as a team. It’s not one for tonight, but knowing him, he’ll wanna do it all over again. He’ll have to bring something different, because on that performance, Usyk was the better man.”

Judges Viktor Fesechko (117-111), Steve Weisfeld (116-112) and Howard Foster (115-113) all scored their fight for Usyk (19-0, 13 KOs), who became a two-weight world champion. The left-handed Usyk, a former undisputed cruiserweight champion, stunned Joshua several times before he hurt the exhausted ex-champion badly late in the 12th round.

Unlike his technical-knockout defeat to Andy Ruiz Jr., however, Joshua (24-2, 22 KOs) made it to the final bell Saturday night. Ruiz (34-2, 22 KOs), a late replacement for Jarrell Miller, dropped Joshua twice apiece in the third and seventh rounds before their 12-rounder was halted in June 2019 at Madison Square Garden in New York.

“It can’t compare to the Andy Ruiz defeat because that was one that just blew us all away,” Hearn said of Usyk’s victory. “It’s sport. You know, you win, you lose. And at the top, top, level, when you’re fighting the very best in the sport, the pound-for-pound top fighters, you can lose. And we said this in the buildup to this fight. It was a risky fight to take. He wanted to take this fight. He wanted to fight the best. He wanted to hold onto his belts. Tonight, they went. They went before, and he won ‘em back. And that’ll be his hunger to retain his championships. Gonna be difficult to do against Oleksandr Usyk, who is gonna go into a rematch with a lot of confidence.

“So did Andy Ruiz, and he won it back. But proud of AJ, as always, for rising to the challenge, for staying on his feet in the 12th round, even with the injury. And just another chapter. You know, you go down, you brush yourself [off]. The first thing he said is, ‘I’ve gotta get back to the gym on Monday.’ I mean, you know, he’s had a tough fight. He’s not thinking straight at the moment. But he’s gutted, and he’ll be devastated. This is everything to him. Boxing’s his life. But it’s sport, and you win and you lose. And when you lose to the better man, you know, you shake their hand and you say, ‘Congratulations. I’ll be back stronger.’ ”

Joshua won back his four titles from Ruiz in their immediate rematch in December 2019 in Diriyah, Saudi Arabia. A more cautious, technical Joshua defeated Ruiz by unanimous decision in their 12-round rematch.

Sweet D Files: Is pay-per-view driving fans away from the sport?
Mike Tyson Sued By Woman For Alleged Rape In The 1990s
Broner: I had to dig myself out of dark place, now I’m ready to go
Sources: Ortiz-Stanionis bout set for April 29
Oscar De La Hoya Looks To Sign Terence Crawford With Golden Boy Promotions