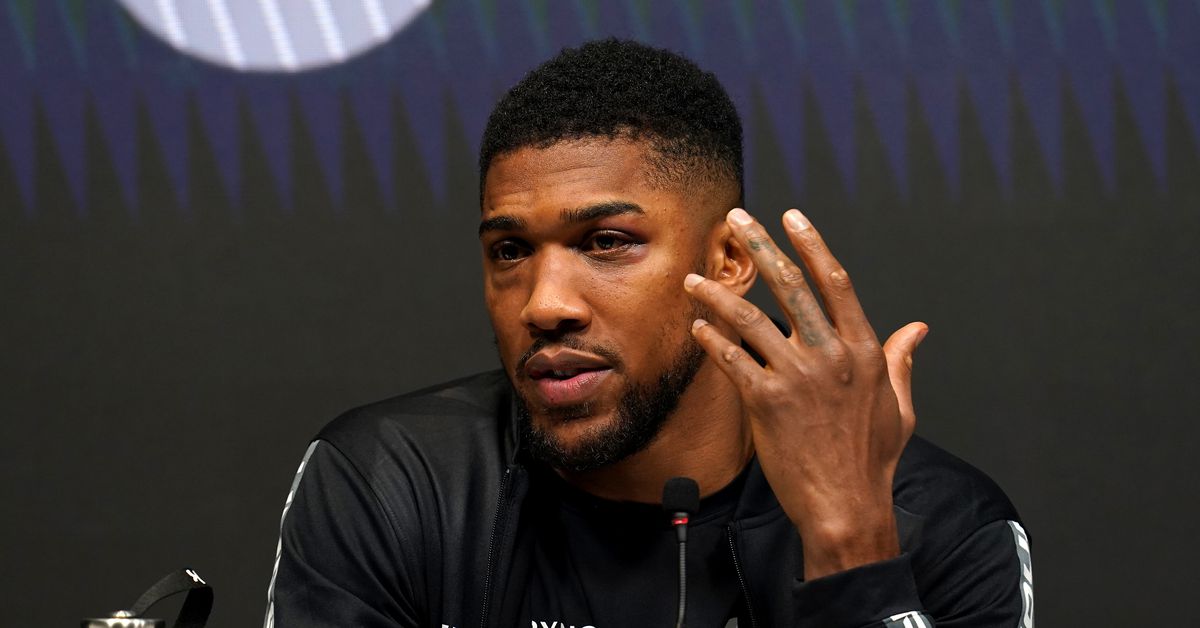 Anthony Joshua suffered the second loss of his pro career today in London, as he was out-boxed and outclassed by Oleksandr Usyk. But the British superstar says he’ll go back to the gym, take the rematch, and come back better.

On the loss to Usyk

“Well done to the winner. We’ll be back again, get back into training. It was a great 12 rounds and a great experience as well in the ring. We progress from this point on once again. We’ll be doing it all again soon.”

On when his eye started bothering him

On what he would have done without the eye issue

On whether or not Usyk’s quality surprised him

“With all due respect, not necessarily. He’s just a lot lighter so the pace, he’s got a good pace. But he still gets hit. He gets hit a lot. And in the rematch we’ll learn how to hit him more and be more concussive with our punch selection.”

On preparing for the rematch

On how the fight went overall

“It was a good chess match. I’m a boxer and I wanted to out-box him, do certain things. And after my eye, man, in the ninth round — it was a great lesson, though. Great lesson. For me personally, I’m just learning this game. I’m learning, I’m studying. Eight rounds were going well, then the ninth a little issue happens in the fight. You’ve got to stay consistent. The other fighter starts putting up more pressure, picking up the pace, he can probably sense something. I’ll come back again. I’ll pick up where we left off now and try to be better, I’m sure I’ll be better in the next one.”

On weight for the rematch

“I don’t tend to look at the weight and think to myself, ‘Well, I want to come in lighter or heavier.’ I just look at whatever happens in sparring. How I’m performing in sparring, and then the weight kind of figures itself out. I’ll just condition myself to how I’m performing when I’m doing my rounds in the ring.”

On how he’ll handle the loss

“I’m a different kind of animal. I’m not a sulker. This is a blessed opportunity to be able to fight for the heavyweight championship of the world, to be able to fight good fighters time and time again, for people to come out. I’m not going to go home tonight and be crying about it because this is war. It’s a long process. This isn’t just one fight and then I’m done. I’ve got an opportunity to go back to the drawing board, so I can’t go back and sulk. That’s wasting time. I’m going back to look at ways I can improve straight away. I’ve already been watching the fight and figuring out, ‘Alright, I could have done that better,’ in my mind, anyway. I’m not too bothered. What I’m bothered about is how much better I can get. I’m not putting my energy into sulking, I’m putting my energy into how I can improve.”

On how he might handle being an underdog in a rematch

“I don’t look at it (that way). If you know me, I don’t fuss about — the belts don’t represent me, I represent myself. I’m just looking to go in there, improve, (get) stronger, smarter, and I believe I’ll get a good win in the next fight because of what I learned this fight. I’m a quick learner and we’ll bounce back.”

On criticism of the game plan

“It’s all about experiences. You’ve got to trust the process. If it went well tonight, it would have been perfect, but it didn’t. I don’t have any regrets. We went through the process, but what I’m happy about — I can go again. I’ve got a chance at becoming heavyweight champion of the world again. I’ve had enough of looking at things from a negative point of view. I’m just keeping a positive head on my shoulders.”

On if he felt he had the advantage at any stage

“There was certain things I was doing in the fight I’ve never done before. I felt like I had a good foothold in the fight, and I’m going to build on that.”

“We went 12 rounds. You hit people hard, you hurt them, but they’re smart, they’re good boxers. At this level, people know how to survive. When you hit someone hard, they know how to ride the shot. They’re just quite intelligent at this level. Even though you hurt them, it’s not so concussive that the next punch that lands is going to knock them down. It’s like chopping down a tree, it takes a bit of time. When you’re at a lower level, it’s a lot easier to knock someone out. I’m trying to progress and trying to level up, and I will get there for sure.”

“There’s an old saying, if you want to go down as a great fighter, don’t fight southpaws, especially good ones. He’s a good fighter. Southpaws are tricky. They’re not the easiest fighters. If I was fighting an orthodox fighter, I probably would have knocked him out by the ninth, no matter who it is. I know this experience today is invaluable and the next fight will benefit me a lot. This will have a massive benefit in the next fight. It won’t do me any worse.”

On any words with Usyk after the fight

“After the fight, no. I was just quite disappointed. But in the changing room, I just said to him, ‘I’ll see you again,’ really. I sent a message to his kids, as well, saying hello, and that’s it.”

On this derailing the “road to undisputed”

EXCLUSIVE Liam Smith WIFE REACTION to “Tough Week” & TKO vs Chris Eubank Jr
AWKWARD! Artur Beterbiev BITES BACK at question ‘YOU WANT TO BE ANGRY WITH US?!’ | #shorts
BN Verdict: Brilliant Yarde does everything but win against brutal Beterbiev
Mayweather Jr to fight reality star Chalmers
Panel: How much interest do you have in seeing a rematch between Liam Smith and Chris Eubank Jnr?