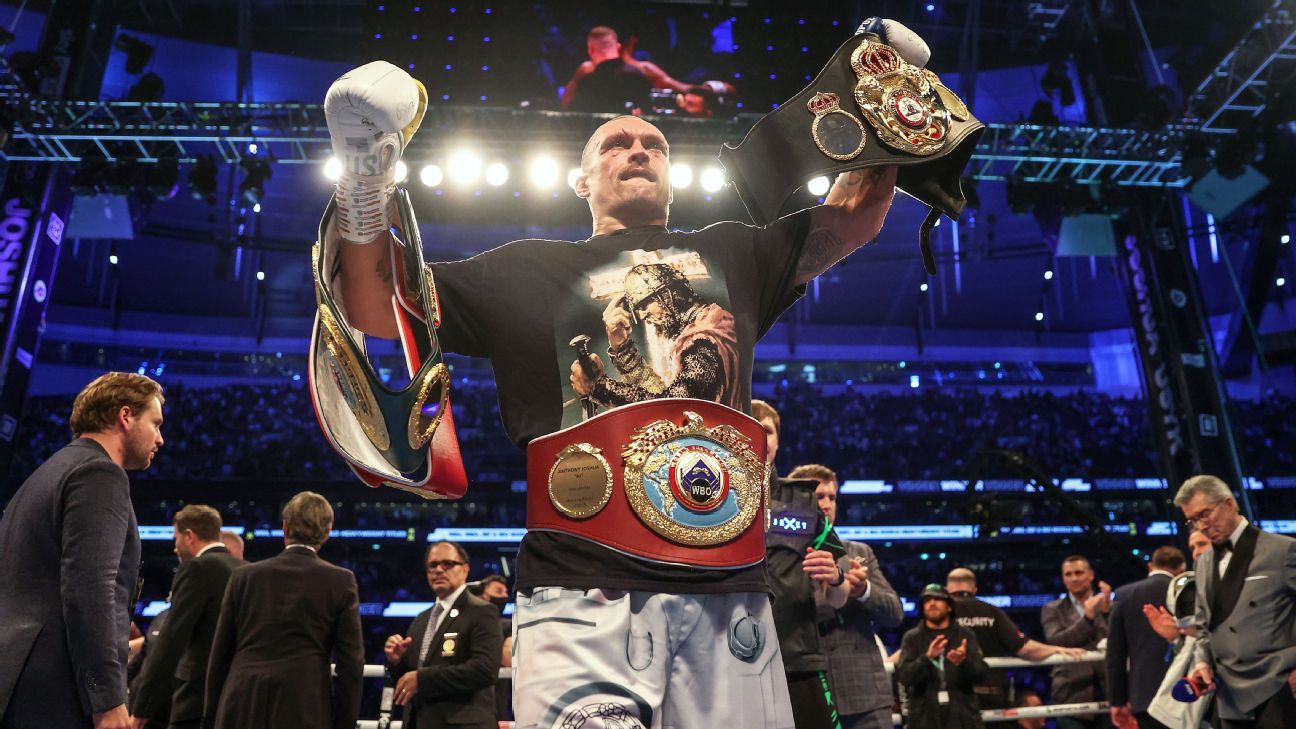 LONDON — Oleksandr Usyk shook up the heavyweight division to become a two-weight world champion with a unanimous decision win over Anthony Joshua for the WBA, IBF and WBO world heavyweight titles Saturday.

The Ukrainian’s footwork kept him out of trouble while his accurate jab and quick combinations piled on the points as he won by the judges’ scores of 117-112, 116-112, 115-113 in front of Joshua’s 66,227-strong home crowd at the Tottenham Hotspur Stadium in London.

Usyk (19-0, 13 KOs), 34, hurt Joshua (24-2, 22 KOs), 31, in the third and seventh rounds and almost finished off the English boxer amid a furious attack late in the 12th round. Joshua will want a rematch, but he failed to seriously threaten Usyk, who was quicker to the punch and more elusive.

Joshua, the naturally bigger man who has lost the titles for a second time in two years, is now counting the considerable cost of another surprising defeat that ends his hopes of fighting English rival Tyson Fury for all four world heavyweight titles next year.

“A devastating defeat,” Matchroom promoter Eddie Hearn said. “Usyk is very fit, he’s got great feet, he threw a lot of punches. It was a tough defeat. [Joshua] got beat by the better man on the night.

“He will want to go straight back into the rematch. The desire is still there. He can do so much better in that fight.”

WBC champion Fury will defend his title in a third fight with American Deontay Wilder on Oct. 9, and the winner of that fight could pursue a clash with Usyk, who won the titles in just his third fight at heavyweight after unifying all four world cruiserweight titles in 2018.

Most of the world heavyweight title belts are now back in Ukrainian hands with Usyk’s success, after brothers Vitali and Wladimir Klitschko dominated the division while reigning as champions from 2004 to 2015, including one period when they held all four belts between them. Vitali was at ringside in London to enjoy the moment.

Usyk, the mandatory challenger for Joshua’s WBO belt, became the third boxer to win world titles at cruiserweight and heavyweight after David Haye (England) and Evander Holyfield (United States). He began the fight as ESPN’s No. 4-ranked heavyweight.

Once again the U.K. proved a happy hunting ground for Usyk, with this being his third win there in three years, in addition to his Olympic gold medal at London 2012.

“The fight went exactly the way I expected it to go,” Usyk said. “There was times when Anthony pushed me hard but nothing special. I had no objective to knock him out. My corner pushed me not to do that. You didn’t see the best Usyk. I can be much better.”

Joshua weighed in at 240 pounds, 19 pounds heavier than Usyk, who, despite being a career-heaviest 221 pounds, was still noticeably smaller than the champion in the ring. Joshua had a 3-inch height and 4-inch reach advantage as well, but Usyk overcame all those challenges with his fleet-footed movement, smart boxing skills and courage.

Joshua, from Watford, basked in his first big-stadium crowd in the United Kingdom in three years and looked relaxed on his way to the ring amid a fusillade of fireworks. However, he tensed up in the first round, which allowed Usyk to score with more shots — including a right hook to the side of the head.

Usyk, from Kyiv, is friends with and trains alongside Vasiliy Lomachenko, the brilliant lightweight who has won world titles in three weight classes. Like Lomachenko, Usyk has sublime footwork and, combined with his slick southpaw skills, proved a difficult target for Joshua to find. Usyk could not put a lot of weight into his shots in the second round but did get through with a snaking, left hand down the middle in another tentative, close round.

Usyk kept finding openings, including a sweeping left hand that staggered Joshua in the third round. The champion smiled and was not seriously hurt, but his corner must have been concerned about Usyk’s increasing dominance. Joshua responded with a stiff right hand in the fourth and tightened his defense to deny Usyk opportunities to land anything.

The fourth round belonged to Joshua, who also landed a good right hand in the fifth round but got caught by a couple of jabs. Usyk’s reliable right-hand lead kept flicking out as he looked to set up his left hand, but he ended the sixth on the back foot as Joshua landed heavy, single right hands.

Usyk was better in the seventh, landing a counter left and almost flooring Joshua later in the round. The Ukrainian caught Joshua with a left to the jaw that sent the Englishman stumbling backward as the momentum shifted again. But Joshua responded with an aggressive eighth round, landing a right uppercut. Usyk then proved too elusive in the ninth.

Both had cuts around their right eyes by the 10th round, and Joshua’s corner worked at reducing the swelling before the 11th round. With blood streaming down his face, Usyk landed some sharp punches early in the 11th to set up a crucial final session.

Usyk started full of energy and hunger and bounced two left hands off Joshua’s head. Joshua kept pressing but could not find the punches to hurt Usyk. The challenger was busier and bolder and finished the champion with a barrage of hooks that left Joshua slumped on the ropes and rescued by the final bell. Had there been a few more seconds, Joshua looked like he would have been stopped.