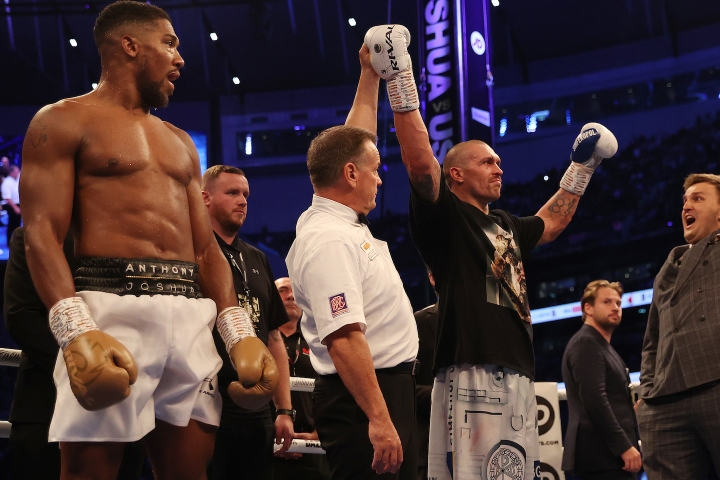 The unbeaten boxer from Ukraine was able to outbox Joshua over twelve rounds to capture the IBF, IBO, WBA, WBO heavyweight titles at Tottenham Hotspur Stadium.

Froch would have liked to see Joshua use more of his physical advantages against a boxer, who moved up from the cruiserweight ranks.

He felt Joshua made a big mistake by attempting to box with a man regarded as one of the best boxers in the world.

The British star is planning to exercises an immediate rematch clause – with a second meeting targeted for the first quarter of 2022.

“I thought AJ would get going and impose his advantages more. The bigger size and reach and 19lbs. If you want to beat a top boxer you don’t box him, you fight him, don’t play them at their own game because then you give them all the advantages,” Froch said.

“AJ did that, he tried to box with Usyk and he is too good. I would have liked a stronger start from AJ but Usyk is a magician. He can start quicker and stronger in the rematch and get rough but the way Usyk finished the fight worries me because he could have relaxed and instead he took him on and tried to finish him.

“That told me he did to show him what could be coming in the rematch. What a fighter Usyk is, I have to say I don’t fancy AJ in the rematch, he has to seriously change his tactics and his game plan and get rough early. Apparently he has said he wants the rematch straight away but I think he needs to sleep on it and look over at what he did wrong and what he can improve on.

“I didn’t think AJ would lose like that, I never saw it coming that way because the ending was a bit of a beating. I am sure Joshua can come again but it depends how much he wants it because he has achieved so much and done so well. I do think Anthony Joshua can win the rematch, he does have the physicality, but he needs different tactics and game plan, he needs to implement his size and stature a lot more and a lot earlier.”

JOSH TAYLOR on Smith “SUPRISE” TKO vs Eubank jr & “REALLY PAINFUL!” Postponement vs Jack Carrerall
Panel: How much interest do you have in seeing a rematch between Liam Smith and Chris Eubank Jnr?
Dillian Whyte Wants Both Boxing, MMA Fight With Francis Ngannou: ‘I Would Bash Him’
Why we might have to wait until 2024 to see Artur Beterbiev vs. Dmitry Bivol in a must-see matchup
Amir Khan & Kell Brook SQUASH BEEF after CLASSIC RIVAL fight