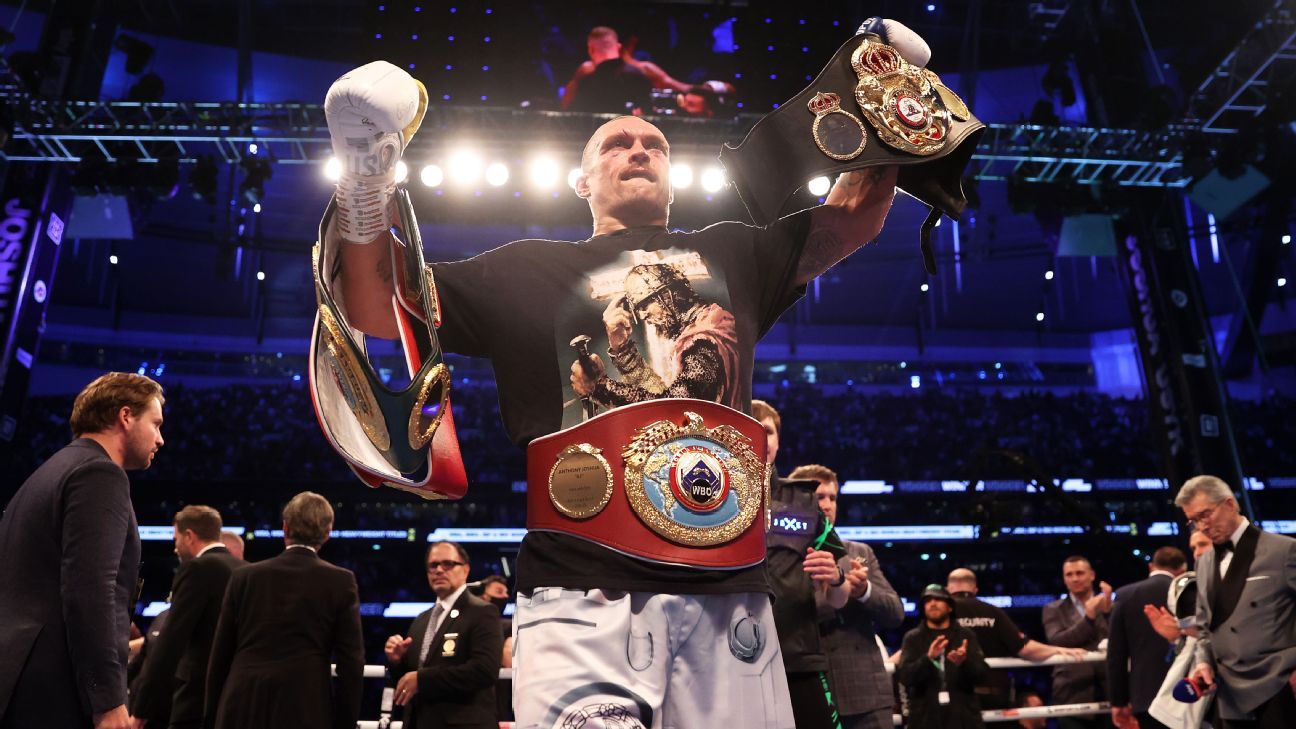 Ukraine’s Oleksandr Usyk’s win over Anthony Joshua in only his third heavyweight fight makes him part of a small collective of boxers who won world titles at lighter weight classes before stepping up and conquering the big boys.

Usyk unified all four world cruiserweight titles and made six title defenses at that weight class before stepping up to heavyweight for two routine no-thrill wins over Chazz Witherspoon and Dereck Chisora.

Usyk is not small by any means. He checked in at 6-foot-3 and weighed 221 pounds for this fight with Joshua, which was heavier than when Muhammad Ali tipped the scales at 216 pounds for his famous “Rumble in the Jungle” clash with George Foreman in 1974, and 211 pounds when Ali beat Sonny Liston to first become world heavyweight champion 10 years earlier.

Joshua, however, was considerably bigger than Usyk, after weighing in at 240 pounds.

Some fighters took longer to adjust to the heavyweight division before winning world titles, while others did it quicker than Usyk. So how does Usyk’s achievement compare to others who won world titles at heavyweight after reigning at a lighter division?

After unifying the world cruiserweight titles in a first defense in 2008, the English boxer overcame huge height and weight disadvantages to win the WBA world heavyweight title from Nikolai Valuev by a majority points decision in 2009. It was only Haye’s third fight as a heavyweight, just like Usyk.

After blasting away Tomasz Bonin in 105 seconds in April 2007 in his heavyweight debut, Haye returned to cruiserweight for two world title wins before resuming his heavyweight career. He stopped Monte Barrett in 2008 before overcoming a seven stone weight disadvantage to beat Russian Valuev. Haye (217 pounds) was too mobile and boxed cleverly against 7-foot Valuev (316 pounds), who towered over 6-foot-3-inch Haye.

The English boxer made two defenses before losing the title to Usyk’s fellow Ukrainian Wladimir Klitschko on points in 2011.

Valuev is one of the poorer world heavyweight champions in history, and Usyk’s success against a fellow Olympic gold medalist in Joshua, who had previously won nine world heavyweight title fights, can be judged as better than Haye’s achievement.

After winning the world middleweight title in 1993 and then reigning as undisputed world light-heavyweight champion, the American boldly stepped up to heavyweight to win the WBA world title from Andy Ruiz in a dominant points victory in 2003.

Jones weighed 193 pounds to Ruiz’s 226 pounds and won the title six months after making the light-heavyweight limit. But Jones did not beat a dominant champion in Ruiz, and afterwards returned to lightweight without making a heavyweight title defense.

Jones was boxing’s best fighter in the 1990s, and he won world titles in four weight classes. Usyk has a long way to go to match those achievements in his own era, but the Ukrainian beat a better opponent in Joshua to win three versions of the world title.

The southpaw won the world heavyweight title in his seventh heavyweight fight when he stopped Bert Cooper in five rounds in 1992.

After his ninth and last defense of the WBO light-heavyweight title in 1990, Moorer reappeared as a heavyweight and, seven fights later, recovered from two early knockdowns to knock out Bert Cooper in the fifth round.

The American went on to beat Evander Holyfield for the IBF and WBA world titles in 1994, but Usyk’s win over Joshua beats Moorer’s first moment of glory at heavyweight.

Forget the sad spectacle recently of a 58-year-old Holyfield recently stumbling around a ring; the American was one of the standout stars in an exciting era of heavyweight boxing featuring the likes of Mike Tyson, Lennox Lewis, Riddick Bowe and more.

Usyk took more time to adjust to life as a heavyweight than Holyfield, who fought and won all three world titles to become undisputed world heavyweight champion with a third-round knockout of James Douglas in October 1990. Douglas weighed 246 pounds, while Holyfield tipped the scales at 208 pounds.

After a long reign as undisputed world light-heavyweight champion, making a total of ten defenses, the American won the world heavyweight title in his first fight at heavyweight.

Spinks bravely took on Larry Holmes (221 pounds) in 1985, and despite giving away 22 pounds, he won a close points decision for the biggest upset in boxing that year.

Spinks put on 25 pounds to fight Holmes in the space of three months since his last fight as light-heavyweight champion. Spinks won a rematch and after three successful defenses was demolished in a round by a prime Mike Tyson.

His reign may have been brief, but the leap from light-heavyweight to end the seven-year reign of Holmes makes Spinks’ feat greater than what Usyk managed Saturday.

The cruiserweight division has only been in existence since 1996, so English boxer Fitzsimmons made a huge jump when he challenged and knocked out James J. Corbett in Carson City a little over a century before.

A year after arriving in the United States from New Zealand, Fitzsimmons reigned as boxing’s second world middleweight champion from 1891 to 1894 before stepping up to heavyweight and knocking out Corbett in the 14th round in 1897. Corbett out-weighed Fitzsimmons by nearly 20 pounds, but was stopped by a shot to the solar plexus. Former middleweight world champion Fitzsimmons weighed in at 167 pounds, Corbett was 184 pounds.

Corbett was a huge star at the time and it was a big shock, but Fitzsimmons lost the title in a first defense to James J Jeffries and it is hard to judge alongside Usyk’s achievement.

Others who overcame size at heavyweight to win title

Max Baer: The American ended the three-year reign of “Ambling Alp” Primo Carnera, of Italy, in 1934. Carnera was 6-foot-6 and 263 pounds but was floored 11 times by 6-foot-2 Baer, who was 209 pounds, before finally surrendering in the 11th round.

Jim Braddock: Baer lost the title the following year on points to fellow American Jim Braddock, who weighed 194 pounds to Baer’s 211 pounds and had previously competed at light-heavyweight.

Jack Dempsey: The American overcame a four stone disadvantage to floor giant Jess Willard seven times in the opening round before winning the world heavyweight title by third round stoppage in 1919. Dempsey, at 6-foot-1, was 187 pounds, to 6-foot-6 Willard’s 245 pounds. Dempsey went on to become a huge star in the 1920s and reigned until the first of two epic encounters with Gene Tunney in 1926.

Chris Byrd: The American was 33 pounds lighter than Vitali Klitschko when the Ukrainian retired on his stool at the end of the ninth round with a shoulder injury, when he was widely ahead on the scorecards. Byrd lifted the WBO world heavyweight title, then lost it to Vitali’s brother Wladimir six months later.

Ruslan Chagaev: The Uzbek fighter shrugged off a massive size difference to beat Nikolai Valuev on points in 2007. Chagaev (6-foot-1) was dwarfed by 7-foot-2 Valuev, who weighed in at 319 pounds to the challenger’s 228 pounds. Wladimir Klitschko ended his reign in painful style two years later.

FUNNY!! • KSI w/ dad. ”WHAT DID YOU THINK KSI WOULD DO WHEN HE GREW UP? ” – #Shorts
Yordenis Ugas, Jarrett Hurd Plot Their Returns | The PBC Podcast
Tszyu to face Harrison for interim title in March
Joseph Parker Bounces Back With Decision Win Over Jack Massey
Boxing streaming and TV schedule for Jan. 25-28