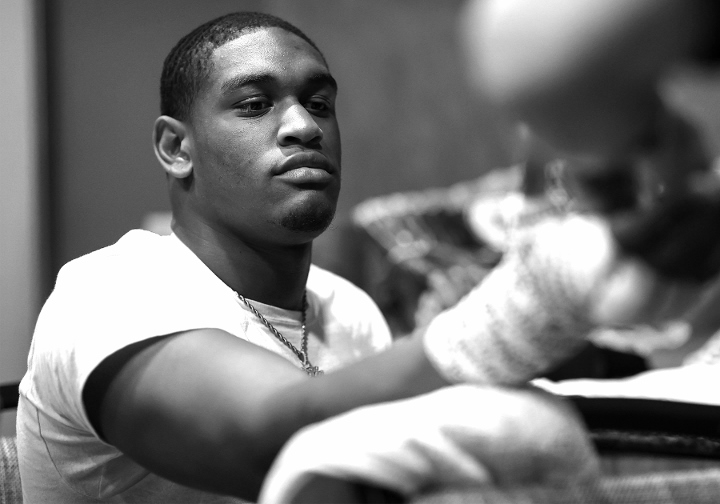 Jared “Big Baby” Anderson will make his pay-per-view debut in his 10th professional fight on the all-heavyweight undercard of Fury vs. Wilder III at T-Mobile Arena in Las Vegas on October 9. Anderson will open the PPV broadcast in a showdown with veteran Vladimir Tereshkin (22-0-1) of Russia in what could be the toughest test of Anderson’s career.

Anderson was just eight-years-old when Tereshkin turned professional in 2007 but his opponent’s experience doesn’t discourage the talented American heavyweight who has never been one to shy away from a challenge.

The 21-year-old former amateur standout has caught the eye of many in the boxing world with his successful run in the Top Rank bubble and the valuable sparring work he gave Tyson Fury ahead of his second fight with Deontay Wilder. He is now ready to step in to the spotlight on October 9 and impress once again.

Anderson was not deterred by the fight postponement and has remained focused and in the gym since the card was delayed in July. He often works with and alongside fellow top athletes and he had the chance to do so while training in Houston, working out with former world title contender Bryant Jennings and fellow heavyweight prospect Efe Ajagba.

His ability to remained focused on his craft and prepared for any challenge has served him well throughout his professional career. While most boxers struggled to remain active during the early days of the pandemic, Anderson scored five victories in the Top Rank bubble.

Since entering the paid ranks in October of 2019, Anderson has not gone to a decision, scoring stoppage victories in all nine of his pro fights.

In addition to his talent in the boxing ring, Anderson is known for his gregarious personality and creativity which is often featured in his in-ring attire. His previous uniforms have included a variety of themes, including a Chucky doll and a chef, so fans are surely in for a treat on October 9.

Anderson returned to Las Vegas over the weekend to complete final preparations for October 9 and will remain in Sin City with coaches Darrie Riley and Kay Koroma through fight night.