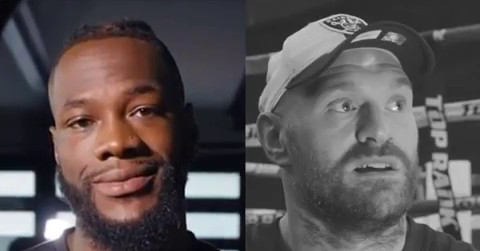 Tyson Fury and Deontay Wilder are both big personalities. They both can be big, loud, boisterous guys. Fury rarely turns off the loud, but Wilder sometimes will turn down the volume to be more Jake “The Snake” Roberts than Hulk Hogan.

As we get closer to their trilogy fight on Saturday, October 9, we’ve seen Wilder (42-1-1, 41 KO) do just that in various interviews. He’s making bold predictions ahead of this fight, which is an attempt at redemption and career rejuvenation for him, but it comes from a place of calm, the image being sold one of violent serenity. Wilder is back, we’re being told, focused and ready to inflict the sort of sudden, shocking damage he has so many times in his career.

Fury, on the other hand, is just talking fast and loud, as he almost always does.

The latter man himself notes the difference by patching together the “messages” the two sent out to one another recently:

Wilder’s style incorporates bits of dramatic acting — smirks and other facial expressions, using his eyes and eyebrows, notable pauses, little chuckles of assurance — and is professionally filmed and produced, with ominous music accompanying his words. I’m not saying he doesn’t mean what he’s saying, I’m saying he knows how to convey the message in classic pro wrestling style, and he does it better than most.

“I’m going to smash your fucking face in, you prick,” Fury replies in a video that seems to be recorded on someone’s phone in the Top Rank gym. No music. No production effects. “How about that for a fucking message?”

This is not to say that Fury doesn’t also put on a bit of the old razzle dazzle, because he absolutely does. He’s a character, and he knows how to embellish and how to sell and how to overdo it as well as anyone in boxing today.

But he does it differently than his opponent, presenting yet another contrast between himself and Wilder. Contrast between the two has been a major part of their rivalry, both in terms of the salesmanship ahead of the fight and once the bell sounds — even if in other ways they are rather similar people, at least more similar to one another than they are to a standard issue human being.