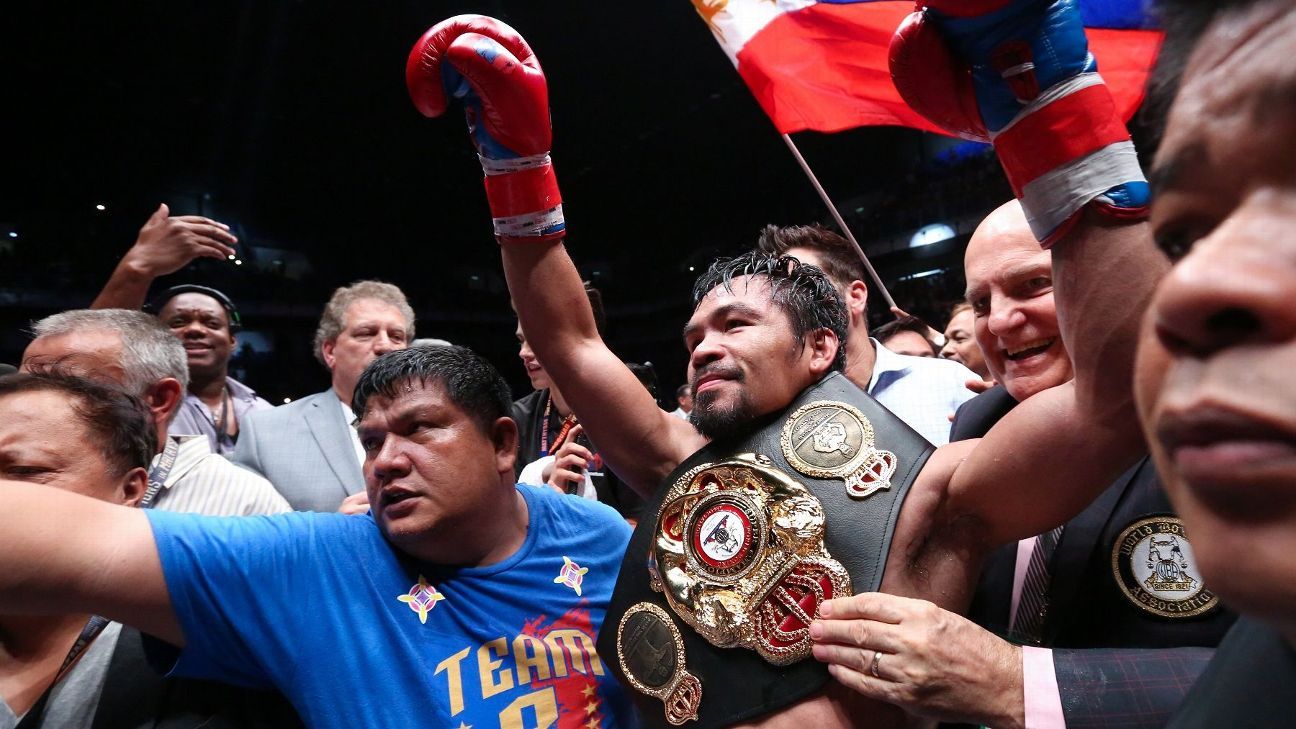 Manny Pacquiao, one of the greatest boxers of all time, announced his retirement Tuesday night, three months shy of his 43rd birthday and one month after a decision loss to Yordenis Ugas.

The only eight-division champion in boxing history, Pacquiao won his first title at 108 pounds and somehow captured a title at 154 pounds too. He’ll be best remembered for his 2015 fight with Floyd Mayweather that shattered revenue records; a quartet of thrilling fights with his greatest rival, Juan Manuel Marquez; and a meteoric rise during the 2000s highlighted by spectacular knockouts of notable fighters no matter how high he climbed in weight.

“Even me, I’m amazed at what I have done,” Pacquiao, who won 12 world titles, said in the 14-plus-minute retirement video he posted on social media. “The only boxer to hold world titles in four different decades and became the oldest boxer to win a world welterweight title; an amazing accomplishment.”

“It is difficult for me to accept that my time as a boxer is over,” he added. “Today, I am announcing my retirement. I never thought that this day would come. As I hang up my boxing gloves, I would like to thank the whole world, especially the Filipino people, for supporting Manny Pacquiao.”

A sitting senator in the Philippines, Pacquiao recently announced he will run for president in May’s election against incumbent Rodrigo Duterte.

Currently ranked No. 6 by ESPN at 147 pounds, Pacquiao was favored to beat Ugas but clearly wasn’t the same fighter who shot to superstardom. The blistering speed was gone, as were the awkward angles Pacquiao used to deliver his impactful shots that scored so many brutal knockouts.

But for all the violence he displayed in the ring, Pacquiao was always gentle and caring outside it — with a smile on his face at almost all times — and a great philanthropist in the Philippines, where he remains an icon.

Pacquiao’s incredible résumé includes victories over Marco Antonio Barrera, Erik Morales, Marquez, Miguel Cotto, Antonio Margarito, Ricky Hatton, Timothy Bradley and, most recently, Keith Thurman. That latest win made Pacquiao the oldest welterweight champion of all time at nearly 41, the last great performance from one of best to ever lace up gloves.

His greatest victory of all was undoubtedly his 2008 thrashing of Oscar De La Hoya, the win that truly transformed Pacquiao into a superstar. The eighth-round TKO was a hellacious beating from the opening bell and was Pacquiao’s debut at welterweight, the division where he found his biggest commercial success.

Pacquiao was twice named fighter of the year by the Boxing Writers Association of America, and his fourth bout with Marquez was the 2012 fight of the year.

Pacquiao was the rare athlete to transcend boxing, making rounds on the talk show circuit during the height of his career. Several of his bouts generated more than 1 million pay-per-view buys. The fight with Mayweather sold approximately 4.6 million units; the previous record was 2.4 million, set by Mayweather’s win over De La Hoya.

Pacquiao earned hundreds of millions of dollars during his career and defeated five hall of famers. His union with hall of fame trainer Freddie Roach, a partnership fostered at Wild Card Boxing Club in Hollywood, California, is one of the most iconic fighter-trainer pairings of all time.

“Goodbye, boxing. Thank you for changing my life,” Pacquiao said. “You gave me the chance to find a way out of poverty. Because of you, I was able to inspire people all over the world. Because of you, I have been given the courage to change more life.

“I will never forget what I have done and accomplished in my life. I can’t imagine that I have just heard the final bell.”

Editor’s Letter: Yarde’s performance against Beterbiev demonstrated not only his quality but the importance of experience
Joe Joyce To Face Zhilei Zhang April 15th In London
What’s next for Navarrete if he wins the 130-pound title? Is interest waning for Spence-Crawford?
Broner: I had to dig myself out of dark place, now I’m ready to go
Tyron Woodley – POST FIGHT PRESS CONFERENCE vs. Jake Paul