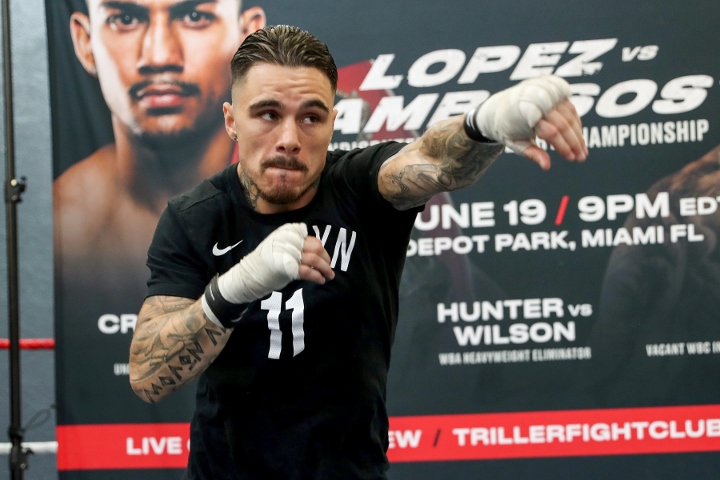 Triller is on the verge of losing out on its lightweight thriller.

The legal team representing Australia’s George Kambosos Jr. is calling for a declaration of purse bid default on the unbeaten IBF mandatory challenger’s oft-postponed lightweight championship clash versus defending unified WBA/IBF/WBO champ Teofimo Lopez Jr. Lead attorney Greg Smith submitted a letter on behalf of Kambosos (19-0, 10KOs) to the IBF, who ordered the fight more than eight months and is now pressed with a decision to make now that the fight is no longer taking place October 4.

“Triller has breached the Contract, lied to the IBF about Mr. Kambosos’ agreement to move the Bout, and attempted to coerce Mr. Kambosos into executing an amendment that does not comply with IBF Rule 10.F.1 in that it does not specify a venue,” noted Smith in the letter, a copy of which was obtained by BoxingScene.com. “In light of the foregoing, Mr. Kambosos has no choice but to ask the IBF to declare that Triller has failed to comply with the contract and with the IBF Rules Governing Championship Contests. Triller should be declared in default under Rule 10.F.2 and should be barred from future purse bids for its egregious behavior.”

The legal threat comes on the heels of Triller’s attempt to move the fight from October 4 at Madison Square Garden’s Hulu Theater in New York City to October 16 at nearby Barclays Center in Brooklyn. Triller Fight Club CEO Ryan Kavanaugh leaked the potential date change to The MMA Hour host Ariel Helwani, though doing so before getting both boxers on board.

Should the ruling land in favor of Kambosos, Triller will be found in default of the purse bid it had won this past February. The upstart company submitted $6,018,000 to outpace the rest of the field, including Matchroom Boxing ($3,506,000) and Lopez’s promoter Top Rank ($2,315,000). At the time, Triller was eyeing May 29 for the fight, before formally announcing the originally scheduled June 5 date earlier this spring. That date was officially changed four times since then, with an attempt at a fifth date change currently met with resistance.

Triller chose to move the show from June 5 to June 19 at loanDepot Park, the home stadium for Major League Baseball’s Miami Marlins. Brooklyn’s Lopez (16-0, 12KOs) ruined those plans—and the 12-fight card with it—after testing positive for Covid-19 which resulted in the cancellation of the show. Triller declared that the event would be rescheduled for August 14, to which Lopez agreed. That date quickly transitioned to September 11 as part of another PPV event before exploring the possibility of staging the event in mid-October in Kambosos’ native Australia.

Lopez put his foot down by that point, threatening legal action over such a move and insisting he preferred the August 14 date initially announced. His legal team—led by Patrick English—also argued that, as the defending champion, he should not be required to travel to Australia where he would have to quarantine for fourteen days upon arrival.

The matter was reviewed by the IBF, ultimately splitting the baby in allowing a deadline of October 17 for the fight to take place to avoid a purse bid default. However, the sanctioning body also ruled that the fight could not take place in any country where either party would be subject to pre-fight quarantine.

That led to the decision of hosting the event in New York City during the first week of October. A date of October 5 was revealed before officially moving it up one night to October 4, a Monday. Subsequent concerns of going head-to-head with a Monday Night Football game between the Las Vegas Raiders and Los Angeles Chargers was the starting point for the latest change of plans.

The excuse didn’t quite fly with Team Kambosos.

“Given that the NFL released its Monday Night Football schedule in May 2021, Mr. Kavanaugh’s comments were either a lie or an admission of incompetence on the part of Triller to understand sports scheduling,” asserts Smith. “In the days that followed, Mr. Kavanaugh attempted to secure the approval of Mr. Lopez and Mr. Kambosos to reschedule the bout in conformance with his announcement.

“Mr. Kambosos is informed and believes that Mr. Lopez signed an amendment to his bout agreement on September 22, 2021 — after Triller misrepresented to him that Mr. Kambosos had signed a similar document. Notably, Triller did not countersign the Lopez amendment, which was provided to the IBF by Mr. [Thorsten] Meier [Triller COO].”

Regardless, Triller left the fight in a holding pattern and on the verge of a financial loss without anything to show for it.

Triller and MSG agreed to cancel the event last Friday, with MSG making it official Monday in removing the event from its calendar and informing ticket holders of the process to secure a refund. The move was done so, however, without Triller having all of its ducks in a row to move the fight back 12 days and to Barclays Center.

Lopez ultimately agreed to such terms as his father and head trainer Teofimo Lopez Sr. cut a side deal with Triller to get more money for his son on top of the $3,911,700 payday he was due to earn. No such deal was reached with Kambosos, who BoxingScene.com learned had asked for an undisclosed six-figure compensation to consider agreeing to a sixth official date.

The two rules cited in the letter both pertain to IBF purse bid procedures.

IBF Rule 10.F.1 – Promoter’s Obligation states that “it is the responsibility of the winning promoter to prepare and provide to the IBF/USBA a copy of the contract(s) for the bout signed by both camps as soon as possible, but not later than fifteen (15) days following the bid procedure. This contract shall contain the amount of the purse, the site, the date, the location of the bout and provide for a minimum of three (3) round trip coach air travel to the site of the bout (unless local to the fighter), accommodations for not less than three (3) persons for four (4) nights, payment for all required visas, and for the reasonable cooperation of the contestants to promote the bout.

“Other terms may be negotiated between the parties and included in the contract, but are not required. The IBF has a standard form Bout Contract for use by the camps after a purse bid. The boxing event must be scheduled to take place not less than 28 days and not more than 90 days from the date of the bid award, unless a different date is agreed to in writing by the boxers and/or approved by the Championships Committee. The winning promoter shall promptly make travel arrangements for the participants and inform them and the IBF of these arrangements.”

The IBF had to get involved regarding travel and accommodations once learning that none had been secured. The New Jersey-based sanctioning body—through IBF attorney Linda Torres—notified Triller of a September 23 deadline in place to secure travel for Kambosos to make his way from Australia to the greater New York area by no later than September 25.

Triller tossed one more Hail Mary in putting the date and location change before the finalized contracts, only for it to potentially backfire. Assuming that Kambosos stands his ground, Triller will be in violation of IBF Rule 10.F.2 – Failure of Promoter to Comply with Obligation. Doing so will cost Triller the 20% non-refundable deposit required to claim promotional rights ($1,203,600), which Lopez and Kambosos will receive through the same 65-35 split applied to the purse bid. Triller is already out the $150,000 deposit submitted to MSG to secure the venue for October 4 on top of the money lost in the ultimately canceled June 19 event in Miami.

Additionally, Triller won’t have a seat at the table for future IBF purse bids through next April per IBF Rule 10.F.2 which states that “failure to provide the above listed information to the IBF/USBA, or to schedule the bout within 90 days of the purse bid in accordance with this rule, will automatically cancel the bid and permit the President to recognize the next highest bidder.

“Subject to the discretion of the IBF, the defaulting bidder will be barred from participating in IBF purse bids for a period of at least six (6) months.”

Should the IBF rule that Triller has defaulted, Lopez-Kambosos will be made available to the next highest bidder. Matchroom Boxing—whose $3,506,000 bid was a distant second to Triller—has yet to publicly state its desire to obtain promotional rights, though BoxingScene.com has learned that the intention exists. There remains an official process in place. Per IBF Rule 10.G – Procedure when Winning Bidder Defaults, Matchroom—once notified by the IBF—will have five (5) days to decide whether to proceed with promotional rights. Should the company accept, the fight must take place no later than 90 days from the point of notification. Matchroom has an exclusive deal with sports streaming service DAZN.