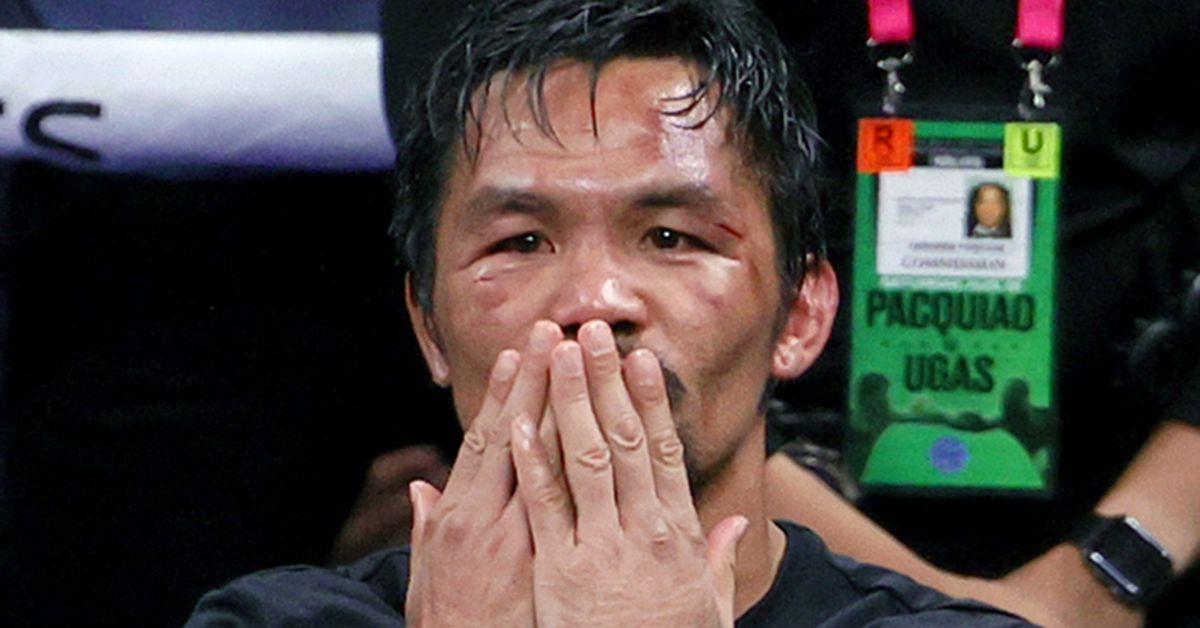 Manny Pacquiao has retired from boxing at the age of 42. The legendary fighter announced the decision in a 14 minute Facebook video titled “Good bye boxing.”

To the greatest fans and the greatest sport in the world, thank you! Thank you for all the wonderful memories. This is the hardest decision I’ve ever made, but I’m at peace with it. Chase your dreams, work hard, and watch what happens. Good bye boxing. https://t.co/Bde4wO82sA

In his farewell video speech, Pacquiao (62-8-2, 39 KO) took time to acknowledge the support of many of the notable figures that shaped his career, including Freddie Roach, who Pacquiao said “was not only my trainer, but also my family, a brother, and a friend.”

He also took the time to thank Bob Arum, who he famously parted from in 2018, saying: “To everyone in Team Pacquiao, thank you for sticking with me through the years. I want to recognize my former promoter, Bob Arum, and his team at Top Rank Promotions for negotiating and staging most of my biggest fights and successful events in my career.”

Pacquiao also thanked the fans that supported him during his career, telling “boxing fans all over the world, thank you very much. I deeply appreciate your love and support. Thank you for always praying for me and watching my fights through the years. Who would have thought that Manny Pacquiao would end up with 12 major world titles in 8 different weight divisions?”

Pacquiao was visibly emotional as he finished his speech:

It is difficult for me to accept that my time as a boxer is over. Today, I am announcing my retirement. I never thought that this day would come. As I hang up my boxing gloves, I would like to thank the whole world, especially the Filipino people, for supporting Manny Pacquiao.

Goodbye, boxing. Thank you for changing my life. When my family was desperate, you gave us hope. You gave me the chance to fight our way out of poverty. Because of you, I was able to inspire people all over the world. Because of you, I have been given the courage to change more lives. I will never forget what I have done and accomplished in my life.”

There will be many words written in the days ahead about Pacquiao’s legacy, his great accomplishments, and the impact he made on the sport of boxing.

Tonight, we at Bad Left Hook will appreciate his emotional, heartfelt farewell, and wish him the best in what will hopefully be a long and healthy, well-earned retirement.

Joe McGrail, Steven Cairns Set To Return on Probellum Card in Liverpool
DANIEL KINAHAN SANCTIONED! Kieran Cunningham on WHAT IT MEANS FOR FURY VS WHYTE & BOXING
Euro News: Christian Mbili, Kerman Lejarraga, Jack Culcay, More
The rebirth of one of boxing’s biggest rivalries: Benn vs. Eubank
Panel: If you had to choose between Chris Eubank and Nigel Benn, who would you pick as your favourite and why?