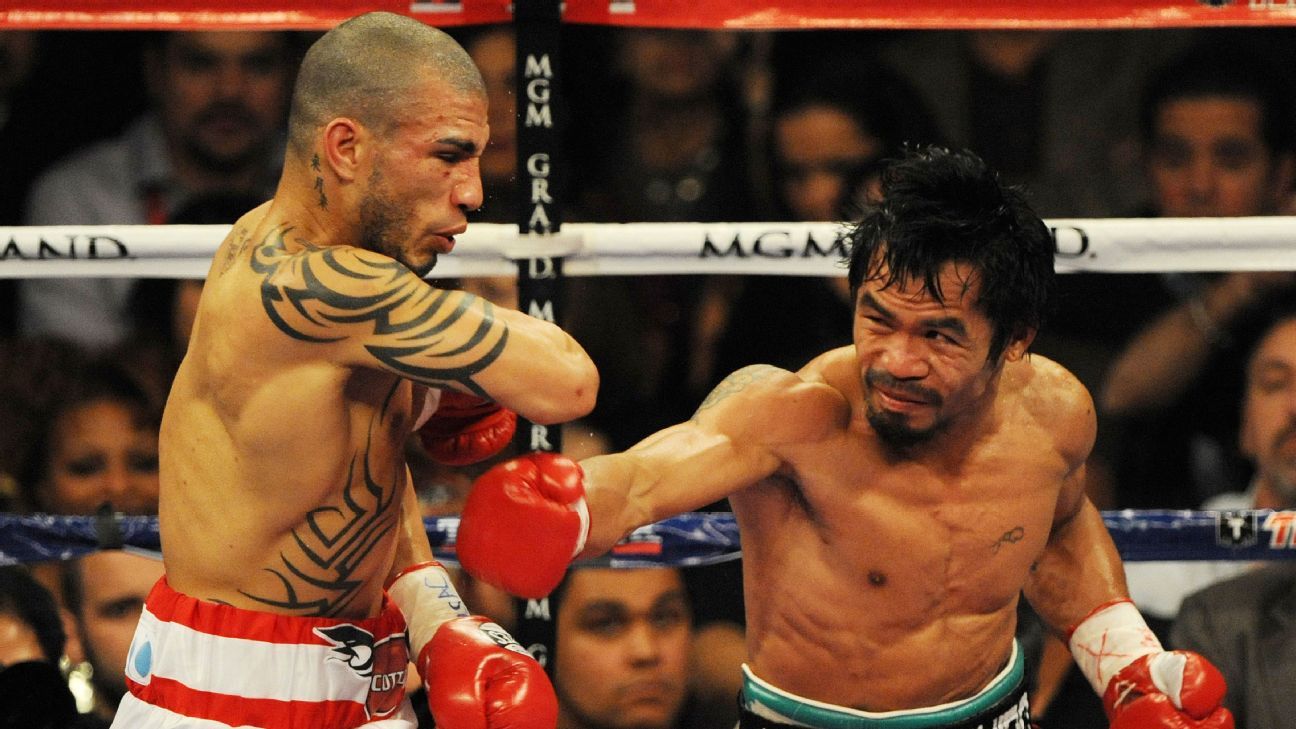 Pacquiao (62-8-2, 39 KOs) made his professional boxing debut as a junior flyweight in 1995 at the age of 16. He rose from poverty in his native Philippines to star in some of the biggest fights in the sport over the past two decades. and ultimately became one of the world’s highest-paid athletes. Stepping away from the ring will allow him to further concentrate on his political career,

He was involved in many memorable fights. Here are some of the key moments in Pacquiao’s career:

At 19, Pacquiao won his first world title with a left hand to the jaw to knock out local hero Sasakul in Thailand.

The incessant pressure fighting we have become so accustomed to from Pacquiao was evident in the eight rounds of the WBC world flyweight title bout.

In his third year as a professional, Pacquiao lacked a lot of the skills and movement he later showed but still dominated a more experienced opponent in a pivotal moment of his young career.

Now with American trainer Freddie Roach in his corner, Pacquiao won a unanimous decision over Mexican great Barrera for his biggest victory to that point at the Alamodome in San Antonio.

Pacquiao recovered from a first-round knockdown and was well in front on the judges’ scorecards before stopping Barrera in the 11th round of a non-title featherweight bout. Pacquiao floored Barrera in the third and 11th rounds before the Mexican’s corner stopped the fight.

Barrera, widely considered the world’s best featherweight at the time, could not cope with Pacquiao’s speed and the end came after he was put under siege against the ropes.

According to CompuBox, Pacquiao landed 257 power punches in his second fight at featherweight, compared to 101 for Barrera.

Pacquiao handed Morales two beatings in 2006 to announce himself as a force at junior lightweight.

After losing on points to Morales on his 130-pound debut 10 months previously, Pacquiao became the first man to stop the Mexican idol in a 10th-round TKO win at the Thomas & Mack Center in Las Vegas.

Later in the year, Pacquiao did an even quicker job on Morales, flooring him three times in a third-round knockout at the same venue.

“For the first time in my career, I actually felt the power of an opponent like I’ve never felt it before,” said Morales, who was never the same again.

Pacquiao claimed a fourth world title in as many weight divisions by stopping WBC lightweight champion Diaz in the ninth round at the Mandalay Bay Events Center in Las Vegas.

American Diaz could not cope with Pacquiao’s speed and his face was left dripping with blood before being knocked out.

“I feel much, much stronger and more powerful at 135 pounds,” said Pacquiao, who threw 788 punches to Diaz’s 463 in his lightweight debut.

Pacquiao captured a seventh title in a seventh weight class by breaking Cotto’s resistance in the last round for the WBO welterweight belt.

As well as another world title, the Filipino phenomenon claimed an impressive win with many now seeing him as boxing’s No. 1 pound-for-pound fighter.

Cotto, a naturally bigger man who had been campaigning as a welterweight for three years, was overwhelmed in the second half of the fight at the MGM Grand Garden Arena in Las Vegas.

In his first fight at welterweight, six months after he had separated Ricky Hatton from his senses at junior welterweight, Pacquiao was too quick and showed he could take a punch at 147 pounds.

Pacquiao, 30 at the time, floored Cotto in the third and fourth rounds before forcing the stoppage in the last round.

“I didn’t know where the punches were coming from,” Cotto said.

Pacquaio’s air of invincibility was shattered when Marquez knocked him out in their fourth meeting.

After crushing Cotto, Pacquiao went from strength to strength, and impressed in wins over Joshua Clottey, Antonio Margarito (for his eighth title in as many weight classes) and Shane Mosley.

Pacquiao edged a close 2011 fight with Marquez by a majority decision and even when his seven-year winning streak was broken by a split-points defeat to Tim Bradley in June 2012, the points decision was met with heavy criticism.

But Marquez, 39, ensured there were no doubts as to the winner of their thrilling fourth encounter.

Pacquiao was down twice in the third round and Mexican Marquez touched down in the fifth before the sensational finish. Marquez landed a seismic overhand right following a missed jab that sent Pacquiao crashing face first to the canvas.

“I was careless. He’s not an easy opponent,” Pacquiao said.

Marquez’s stunning moment made the series 2-1 to Pacquiao, with one draw.

This really was the one we had all been waiting for — but the clash to decide boxing’s pound-for-pound No. 1 never came close to living up to the hype.

Pacquiao was hampered by a right shoulder injury, sustained before the fight, during the richest bout of all time that took over five years to make.

Pacquiao was already assured of boxing immortality but what was less certain going into the fight was his fitness. It showed and Mayweather ran away with a unanimous decision for the WBC, WBA and WBO world welterweight titles at the MGM Grand Garden Arena in Las Vegas.

The fight made a record $500 million and gave Mayweather the right to call himself the undisputed pound-for-pound king of his — and Pacquiao’s — era.

OK, so this was not Pacman’s most sparkling performance, but it is relevant for showing the eight-weight world champion’s dwindling powers.

The unanimous points decision (117-111, 115-113 and 115-113) in favor of Australian Horn was criticized, but Pacquiao looked a shadow of his brilliant best. He lacked the speed and sharpness of previous years at Brisbane’s Lang Park in Australia.

Horn captured the WBO world welterweight title from Pacquiao, who paid for a slow start and took a year off.

But it wasn’t the end … this remarkable fighter provided one more run of glory, halting Lucas Matthysse for the WBA “regular” welterweight title in 2018 in his first stoppage win in seven years.

After outpointing a faded Adrien Broner, Pacquiao then enjoyed his last hurrah against Keith Thurman, who at 30 was 10 years younger than him.

Pacquiao made a storming start, flooring Thurman in the first round and went on to win a split decision and become boxing’s oldest world champion (he won the WBA “super” welterweight world title from Thurman).

Thurman had a height, reach, and age advantage, but he got knocked down with less than a minute to go in the first round, and Pacquiao continued to dominate with speed and power that defied his age. It was another big win in Pacquiao’s fairytale career and was an emphatic response to those who said he was in decline.

Yordenis Ugas unanimously outpointed Pacquiao by scores of 115-113 116-112 116-112 in a defeat that finally convinced the Filipino senator it was time to concentrate full-time on his political career.

Ugas, of Cuba, retained his WBA belt, which Pacquiao was stripped of because of inactivity. Ugas was a late replacement to face Pacquiao and took the fight on 11 days’ notice because Errol Spence Jr., the WBC and IBF champion, pulled out with an eye injury.

Ugas was more accurate, and Pacquiao, after a two-year layoff, had no complaints about the outcome at the T-Mobile Arena in Las Vegas.

“I did my best tonight, but my best wasn’t good enough,” Pacquiao said. “No excuses. I wanted to fight for the title in the ring, and tonight the champion is named Ugas.”