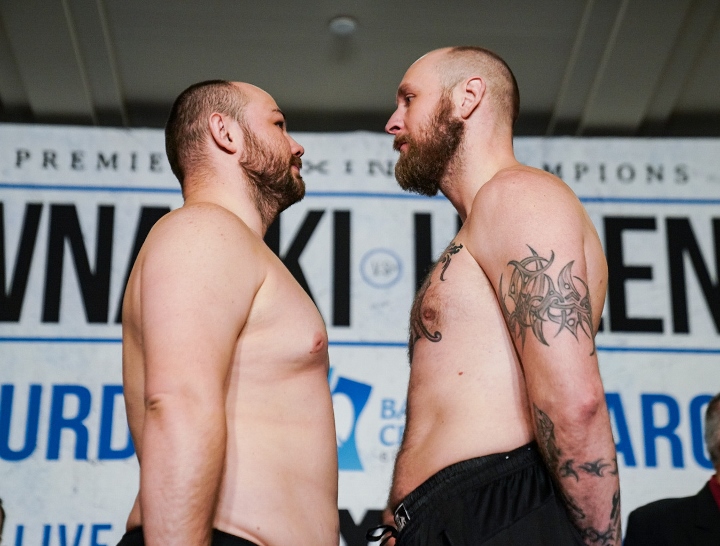 Adam Kownacki has had more time than he cares to remember to think about his first professional defeat.

Waiting more than 18 months for his shot at redemption has helped Kownacki work on his flaws, though, particularly his obvious defensive deficiencies. The popular Polish heavyweight contender fully understands that he cannot be as reckless in his upcoming rematch with Robert Helenius as he was when they fought in March 2020.

Brooklyn’s Kownacki was in control of a fight FOX televised from Barclays Center before his carelessness cost him. A resilient Helenius sent Kownacki to the canvas twice during the fourth round, which caused referee David Fields to stop a main event that was scheduled for 12 rounds.

Their “immediate” rematch, which has been postponed several times, is scheduled to occur October 9 on the pay-per-view portion of the Tyson Fury-Deontay Wilder undercard at T-Mobile Arena in Las Vegas. Kownacki (20-1, 15 KOs) cannot wait for his opportunity to end what he jokingly calls his “Norwegian Nightmare” by beating the 36-year-old Helenius (30-3, 19 KOs).

“I’m just gonna be more cautious,” Kownacki told BoxingScene.com. “I think it’ll be a lot different. I mean, I think I was winning that fight. You know, I won the first three rounds until I got reckless coming in and got caught with a good shot. It’s the heavyweight division and one punch can change everything, so obviously I’ve gotta move my head. And the most important thing I’m working on now is double-jabbing, making sure I’m looking at my opponent, not coming down before I get caught, you know? If I’m able to do the same thing, just not getting caught, I’ll be all right.”

The 32-year-old Kownacki will try to remain more patient when he faces Finland’s Helenius again. He sensed an exhausted Helenius was ready to go in their first fight, which initiated his haste.

The 6-feet-6, 238¾-pound Helenius hurt Kownacki with a left-right combination that dropped Kownacki to one knee 20 seconds into the fourth round. Fields didn’t see the punches Helenius landed and didn’t count that sequence as a knockdown.

A woozy Kownacki couldn’t remain on his feet much longer, though.

Helenius’ right-left combination knocked Kownacki flat on his back a mere 10 seconds after he went to one knee. A courageous Kownacki got right to his feet again, but Helenius unloaded a barrage of flush punches that backed a defenseless Kownacki into the ropes.

Fields then stepped between them and halted the action 1:08 into the fourth round.

“He was huffing and puffing, so I coulda had him,” Kownacki said. “I know [Gerald] Washington knocked him out in the [eighth] round [in July 2019], so I think in the back of my head I wanted to out-perform him. Because I knocked Washington out in the second round, I felt like I had to do better than him. I wanted to do it, but everything happens for a reason.”

FURY to USYK “If Contract Not Signed Soon WE’RE MOVING ON!”
Spence vs Peterson FULL FIGHT: January 20, 2018 | PBC on Showtime
“Yarde is the special one, not Beterbiev,” says Tunde Ajayi
‘AFTER CONOR BENN, AM I STILL THE BAD GUY?’ – Eubank Jr readies for GGG & Dismisses Smith
Panel: How much interest do you have in seeing a rematch between Liam Smith and Chris Eubank Jnr?