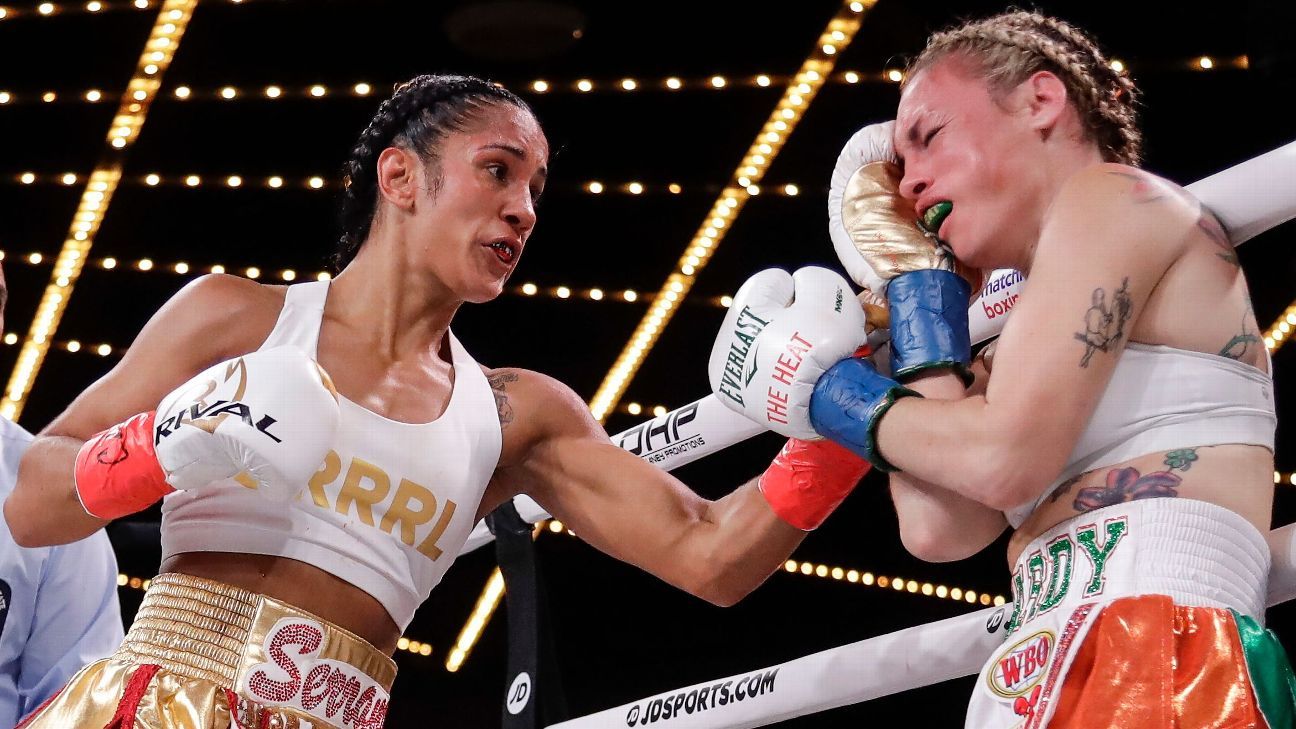 Jake Paul is expanding his footprint in the boxing world by signing one of its top female fighters.

Serrano is a seven-division boxing champion who has held nine titles from 115 pounds all the way up to 140 pounds. She holds the Guinness record for most boxing world championships held in different weight classes by a woman. ESPN has her ranked No. 3 among women boxers on its pound-for-pound list.

“They’re such a powerful team,” Serrano said. “I’ve seen what they’ve done in the last two years — what Jake has done, what Nakisa has done for Jake. I’m looking forward to what they can do for me.”

Paul, 24, described Serrano as the “greatest Hispanic female athlete of all time” and said he believes she has a “massive, massive future.”

“Without really much help she’s gotten this far, with just her skills,” Paul said. “She hasn’t had someone with a big platform really put her on. She’s so marketable. And really the sky’s the limit, and that’s what we do at MVP. There’s a new era of boxing and there’s a new way about promoting these fights and there’s a new way to become a big fighter. So, she already has the skills, and now we’re going to add our secret sauce into the equation.”

One of the goals, they said, is to secure Serrano with a highly anticipated matchup with Katie Taylor, ESPN’s No. 1 pound-for-pound women’s boxer. It would be one of the biggest fights ever in women’s boxing.

Bidarian said talks are ongoing with Taylor’s promoter, Eddie Hearn, and they are targeting Taylor vs. Serrano for the second quarter of 2022 at New York’s Madison Square Garden. Serrano will likely fight next on Paul’s undercard, potentially before the end of the year, and then move on to the blockbuster bout with Taylor.

“The only reason it wouldn’t get done is if the right deal isn’t presented for Amanda, and that’s Jake and I’s job to make sure that’s not the case,” Bidarian said of the Taylor fight.

Bidarian is the former CFO of the UFC and has been instrumental in helping guide Paul from being a famous YouTuber to one of the most talked about fighters in combat sports.

“I think the other part of it that we’ll be able to help [Serrano] with is negotiating the right deals, getting her the right positions for someone of her stature — whether it’s in the ring, whether it’s outside the ring, whether it’s a brand partnership, consumer products,” Bidarian said. “She should be one of the highest-paid female athletes in the world. We’re going to make sure that’s the case.”

Serrano (41-1-1) beat Yamileth Mercado in the co-main event of the card Paul headlined against former UFC welterweight champion Tyron Woodley on Aug. 29. A Puerto Rico native who fights out of Brooklyn, she is the unified women’s featherweight champion, holding the WBC, WBO and IBO titles in that weight class. Serrano, 32, has won 27 straight fights, a streak that dates back to 2012. She is also 2-0-1 in mixed martial arts.

Paul has more than 17 million followers on Instagram, and 40% of them are women. He said after his bout with Woodley that his female followers were buzzing the most about Serrano.

“Major priority of mine [is] to push for equality in all aspects of the sport,” Paul said. “I think she’s inspiring females and creating female boxing fans, which is awesome.”

When asked if he would be bringing more boxers in via Most Valuable Promotions, Paul said potentially, but they would have to be the right fit.

“For us, it’s quality over quantity,” Paul said. “We want our fighters to be the biggest. I think there will be more. We’re not in any rush. We want to take our time and our focus right now is just on Amanda.”