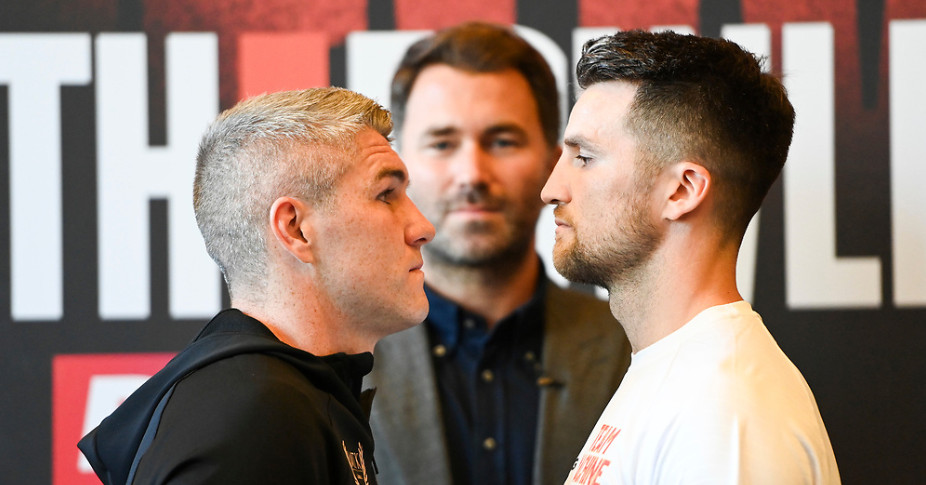 Liam Smith and Anthony Fowler have a big fight coming up on Saturday, Oct. 9, live from Liverpool on DAZN, but one side of the equation maybe doesn’t really see it as a truly “big fight” for his career.

Smith, a former world titlist, didn’t shake hands when the two announced their fight at a press conference, and says plainly that he does not think Fowler is good enough to beat him.

“Beating Anthony Fowler doesn’t get me any closer to fighting for a world title in my career. I don’t say that as if I’m overlooking him,” he said. “Anybody above me isn’t going to look on paper and think, ‘Wow, Liam Smith beat Anthony Fowler in the UK.’ But if you look and it says Fowler beat Smith, then it’s a big statement.

“I’m confident that I beat Anthony Fowler every day of the week and twice on Sunday. If I turn up at 100% then I beat Anthony Fowler. The way I see the fight going, it’ll be competitive early doors and then experience, cuteness and everything else will come on. I’ll stop him down the straight. “

Smith (29-3-1, 16 KO) is coming off of a very controversial loss on the road in Russia against Magomed Kurbanov, a fight we scored for Smith and many others thought he’d deserved to win, too. Fowler (15-1, 12 KO) has won six in a row since an upset loss to Scott Fitzgerald in 2019, but his opposition has been pretty carefully chosen since then.

“I think he’s a good fighter for four rounds, but he reverts back to what he does,” Smith said of Fowler. “Once it goes past four rounds, the fight is only going one way. I’ll just show him I’m that little bit of a step ahead and he wasn’t ready for that step up just yet.

“I’ve been in with bigger punches, better fighters, I’ve been in local derbies with my brothers, he’s got a lot to deal with next week. We’ll have fun in the build-up when he’s back in Liverpool. We’ll have some fun and games.”

De La Hoya admits to making pitch to Crawford, believes he can deliver big fights
Showtime will be absorbed into Paramount+, so what could that mean for boxing?
Why we might have to wait until 2024 to see Artur Beterbiev vs. Dmitry Bivol in a must-see matchup
‘It’s a delicious fight’ Dereck Chisora discusses boxing match between Jake Paul v Tommy Fury
Tszyu: The plan is to sink and drown Harrison, move on to Charlo fight