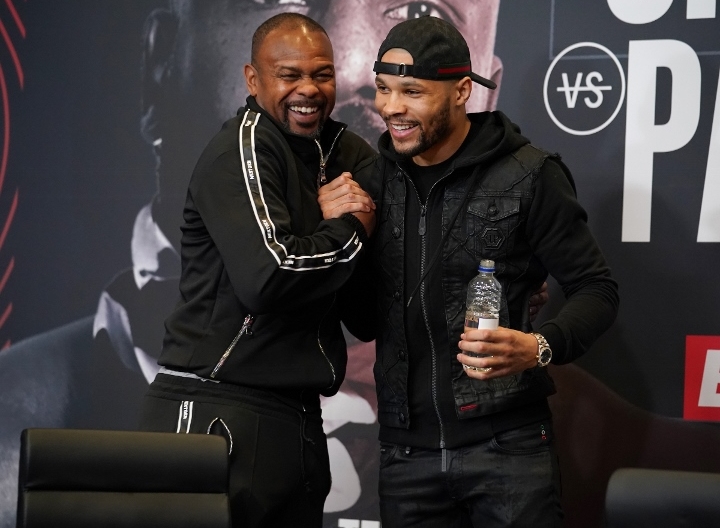 Chris Eubank Jr says that Roy Jones Jr. is the first trainer who has taught him to think in the ring, rather than just doing things on instinct.

Eubank has his second fight with Jones in his corner on Saturday at Wembley when he faces Germany’s Anatoli Muratov. They first teamed up during the pandemic, Eubank staying with Jones on his farm in Pensacola. Now Eubank is returning the hospitality.

“Roy is staying with me at my house, we will be training in Brighton,” Eubank said. “He has been very busy, he hasn’t been able to be in the UK, but moving forward, we will be having more than two weeks to train together before a fight.

“This isn’t a huge fight. When it is a big fight, we are going to have the eight-week camps together. I was with him for a year and half. Everything he taught me I am practicing in the gym, it is not like I go away and forget everything.”

Jones was first in Eubank’s corner for his win over Marcus Morrison earlier this year and said some of the things they worked on included being able to move up and down the gears quickly.

“I felt comfortable, I felt confident, I felt happy with the way we worked together than night,” Eubank said. “He is very calm, he is very calculated, he is very clear. It went well and I am excited with how we can build from that.

“I have always been that type of fighter, I see an opportunity I take it, then I step back and wait for the next one.

“Some guys have a very steady pace throughout the fight, I pick my spots, but I do have a great engine, I am able to exert a lot of energy in the 12th round as I am in the first. Most guys start off strong and dwindle – I am the opposite. I feel I energize more late on. Roy had a similar way of doing things, with his bursts and setting up traps.”

But the biggest thing that Jones has been working on are getting Eubank to spot his openings and to think more when he is in the heat of a fight.

“A lot of things Roy teaches are mental, how to really think about what you are doing in the ring,” Eubank said. “Most guys are not thinking in the ring. A lot of my career it was just reaction or instinct, not auto pilot , but you train and you spar and you work a certain way in the gym and then you get in the ring and that is just the way you do it.

“Roy is about thinking in the ring. Most fighters probably don’t realize, but it’s actually quite rare for a fighter to be in the ring and think ‘I’m going to wait for him to do this’… or ‘I am going to force him to do that and then counter’. There are very few fighters who probably do that. I never used to and now I see myself doing it more and more.”