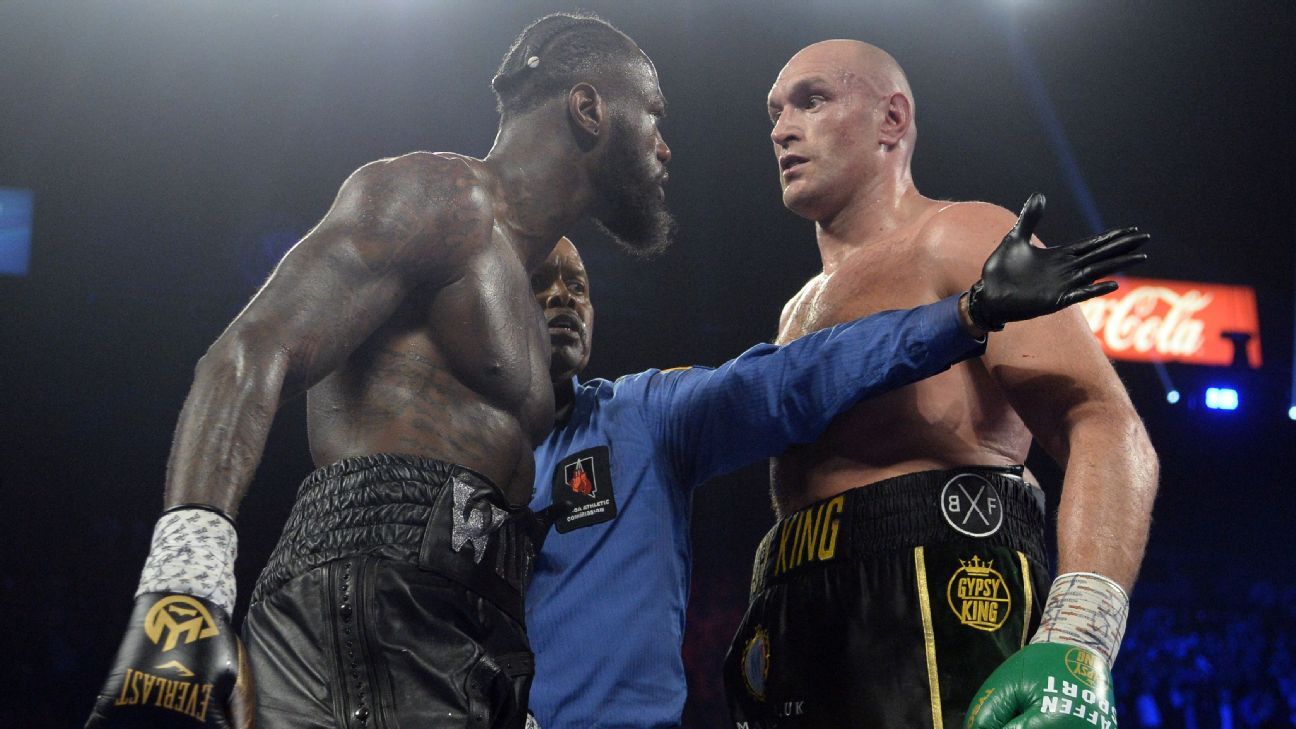 Tyson Fury will defend the WBC heavyweight championship against Deontay Wilder on Oct. 9 at T-Mobile Arena in Las Vegas (9 p.m. ET, ESPN+ PPV). Their third fight is almost three years in the making, and along the way, their teams, other fighters and the legal system have all played a part.

Boxing’s heavyweight division was in a much different place on Dec. 1, 2018, the night Fury (30-0-1, 21 KOs) and Wilder (42-1-1, 41 KOs) fought for the first time. Fury, Wilder and Anthony Joshua were all undefeated, with Wilder wearing the WBC heavyweight title, Joshua carrying the other three belts and Fury owning a tenuous hold on boxing’s lineal heavyweight title — three years after defeating Wladimir Klitschko for three world titles. Fury then took a hiatus from the sport to focus on his mental health, during which time he was stripped of the IBF title in 2015 and vacated the other two world titles in October 2016.

Fury was up on the scorecards heading into the last four rounds, but Wilder knocked Fury down twice, in Rounds 9 and 12. The second knockdown seemed as though it could keep Fury down and earn Wilder a late KO victory, but at the final moments of the referee’s count, Fury popped back up and made it to the final bell. The judges scored the fight a split draw, with one scorecard each in Fury’s and Wilder’s favor.

It took a little over a year for the rematch, as both Fury and Wilder won twice in 2019. By the time they squared off for the second time, Joshua had lost his three world titles and then regained them from Andy Ruiz.

The second fight, on Feb. 22, 2020, looked a lot different than the first. Fury promised a far more aggressive approach, and then delivered. He pushed the action throughout, knocked Wilder down in the third and fifth rounds, and by Round 7, Mark Breland had seen enough in Wilder’s corner, and threw in the towel.

Fury had won the WBC belt, and despite a trilogy fight being written into the Wilder-Fury II contract, there would be many twists and turns along the way before reaching this third fight.

In the days following the fight, Wilder insisted that he would exercise his option for a third fight. He also proclaimed the 40-pound costume he wore during his walk to the ring hampered his performance.

Wilder officially exercised his right to a third fight on March 1, 2020, with a targeted date of July 18, but the fight wouldn’t come together for more than 19 months. Wilder-Fury II was one of the last major sporting events before the world ground to a halt in the early days of the coronavirus pandemic, putting any plans on pause.

In the fall of 2020, there was discussion of a December 2020 date at Allegiant Stadium in Las Vegas, but football and other factors pushed the date again. A month later, Wilder took to social media to tell Fury to “be a man and honor your word.”

In the midst of trying to put Fury-Wilder III together, Joshua and Fury circled around a title unification fight as well. As early as June 2020, their teams started putting together the framework for a two-fight deal. Even in the immediate aftermath of Wilder-Fury II, the boxing world and some of its most prolific fighters were calling for Joshua vs. Fury.

In March 2021, more than a year out from the second Wilder-Fury fight, Joshua and Fury officially signed their deal, and it seemed as though boxing would get its first undisputed champion since Lennox Lewis in April 2000 with a targeted date for August 2021. But talks for the fight collapsed in May, as an arbitrator ruled that Fury and Wilder would have to honor their initial contract and fight by Sept. 15. Within a week, they had agreed to a bout on July 24 at T-Mobile Arena in Las Vegas, with Joshua off to fight mandatory challenger Oleksandr Usyk and left doubting a fight with Fury would ever happen.

But there would be yet another twist just weeks out from fight night. On July 8, the fight was postponed after Fury tested positive for COVID. A week after that, Fury-Wilder III was locked in for Oct. 9, and that same week, Joshua’s fight against Usyk was set for just a couple weeks prior to Wilder-Fury III.

Hopes for an all U.K. heavyweight championship unification superfight between Fury and Joshua were dashed on Sept. 25, as Usyk dominated Joshua on his way to a clear unanimous decision victory and won three world titles. While Joshua has a rematch clause that he, too, intends to trigger, Usyk is already looking forward to a unification bout against the winner of Fury-Wilder III.

Now, all that remains is a fight almost three years in the making. Will Fury finish what he started in the second fight, and continue to dominate? Or will Wilder recapture his form from late in the first fight and regain the title he lost?

Should Deontay Wilder’s corner have thrown in the towel?

Inside the unforgettable 12th round of Wilder-Fury I

We likely would have never gotten to Fury-Wilder III if the events of Round 12 in the first fight had played out even slightly differently. In an oral history of that moment, the key figures remember how it played out from their perspective.

Ring Science: Wilder vs. Fury I

Andre Ward reviews the first fight between Wilder and Fury, and breaks down the mechanics and techniques involved in some of the key moments in the fight.

You’ve heard of rope-a-dope? How about blast-a-bomber?

In the lead-up to Wilder-Fury II, Fury sits down with Mark Kriegel and dictates exactly how he is going to beat Wilder, before he does exactly that.

From Jack Dempsey vs. Gene Tunney to Mike Tyson vs. Evander Holyfield, a look at how important heavyweight title rematches have been to the sport.