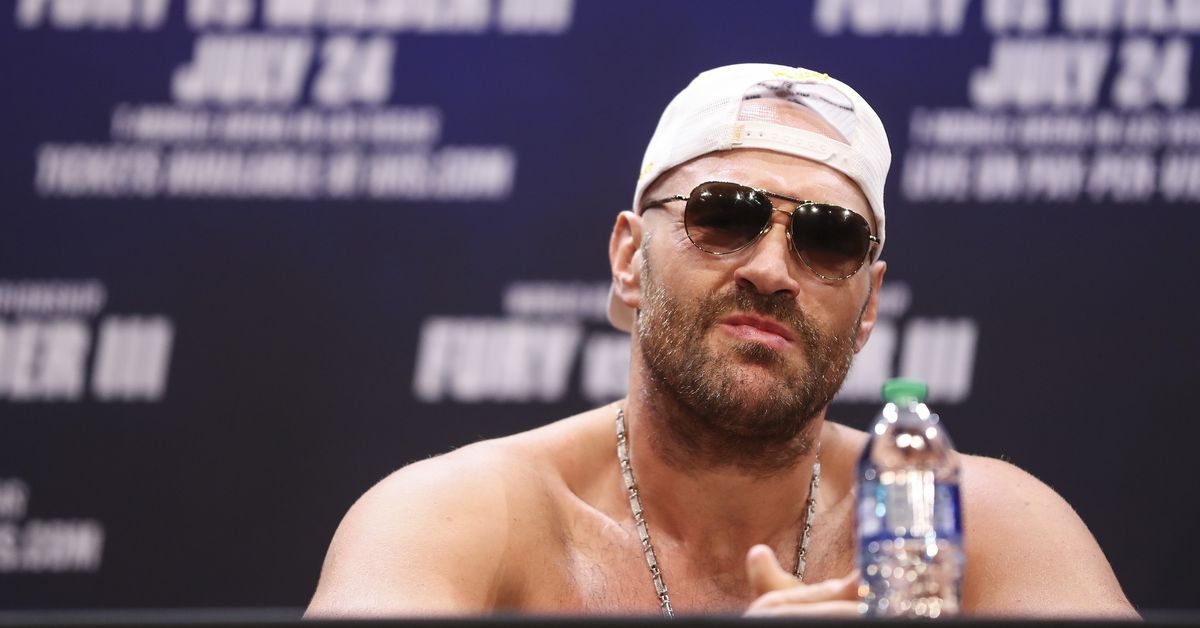 During this virtual media presser with WBC heavyweight champion Tyson Fury, the titleholder discusses his rapidly approaching Oct. 9 fight date with Deontay Wilder before explaining why all of Wilder’s excuses after his loss will prevent him from making the necessary changes to win in their third meeting. Check out some excerpts from Fury below.

Fury on his current condition in training camp

“Am I a hundred percent? I’m a million percent! Look at me, I’m in fantastic shape. I’m as fit as a fiddle, I’m sparring 12 rounds, I’ve got the best sparring partners in the world. I’m absolutely ready. I’m ready today, tomorrow, and forever. I’ll always be ready and I’ll never make excuses because that’s not me. I get in, I do the best I can, don’t make any excuses, and get on with it.

“Make no mistake, this will be Deontay Wilder’s make or break moment in his life. Anybody can lose a fight, anybody can have a bad night, but this is his make or break time. He’s got nothing to lose, he’s a 3:1 underdog. He’s got everything to gain and nothing to lose. And everybody expects me to go in there and beat him down — which I will — but you can never write Deontay Wilder off because he’s at his most dangerous now.”

“Yes, I can go into detail, quite complex as well. See, if you’ve got a problem in your life and you want to overcome it — like I did with alcohol and depression and all that stuff — then I had to admit to myself what was going on. I had to accept reality and put up or shut up. And that’s what you have to do. In order to get better, you need to accept that you need the help, you need to accept the problem.

“So Deontay Wilder’s problem is he couldn’t accept defeat. So long, career undefeated. 44-0, nearly all knockouts, and he gets defeated. It must be hard. The lord knows I don’t know what it’s like because I’ve never had to experience it, but I’d say it’d be hard. But the quicker you can come to terms with being defeated and move on and get better, the more opportunity you have of avenging your defeat — if you can, if it’s possible. If it’s possible in your stars to avenge them defeats then you need to accept the defeat first and then move on.

“What I’ve seen from Deontay Wilder is he can’t accept defeat, he doesn’t know why he lost — there’s a million reasons why — and he’s still banging on that same drum about the gloves weren’t on, drugged water, trainer, all this sort of stuff…And if he would’ve came into this trilogy saying ‘you know what Tyson, you beat me fair and square, good man, but I’m gonna get you in the trilogy, don’t you worry about that’ I’d have been like ‘ok, this is a serious guy, I really gotta take him seriously’ — not that I’m not anyway, but he didn’t show any class at all in defeat and he hasn’t accepted that he’s been beaten. Therefore he can’t overcome it. So you will see what will happen to him on the 9th of October.”

De La Hoya Aims To Sign Crawford: Let Us Present You With Schedule Of Fights Leading To Spence
Rankings (Jan. 30): Beterbiev rolls on, Yarde’s stock rises in defeat, more
Benavidez vs Plant Is ON for March 25 on SHOWTIME PPV in Las Vegas
Tyson Fury: Tommy has to take Jake Paul “really seriously”
Bradley: An open letter to Beterbiev and Yarde — with a game plan for each