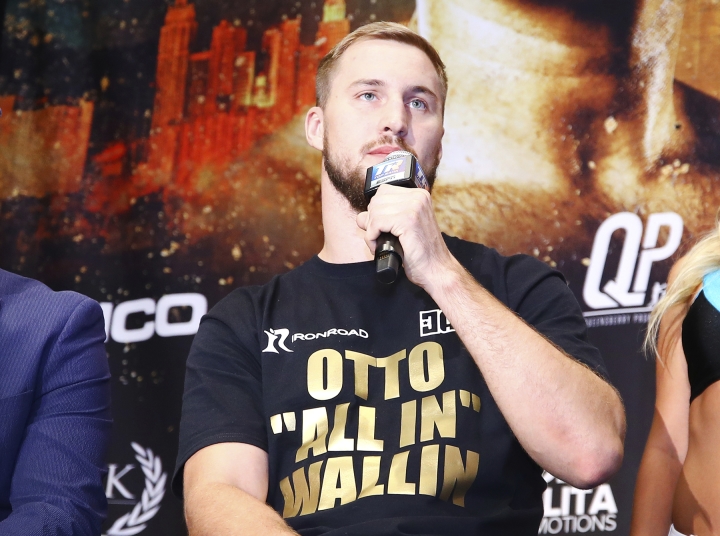 Whyte has long demonstrated that he’ll fight heavyweights others might view as high-risk, low-reward propositions. Dmitriy Salita still thinks Whyte made a mistake by choosing the Swedish southpaw as his opponent for a 12-round main event October 30 at O2 Arena in London.

“I think that Whyte is a real champion, a tough fighter and wants to challenge himself,” Salita told BoxingScene.com. “As he has shown throughout his career, he’s willing to fight the best and take on tough challenges. I think Dillian Whyte is a real fighter – he’s gonna come to fight. I think he’s very strong, has lots of skills, but I do think that Otto is the better boxer, is more skilled, has a better ring IQ. I do think it’s gonna be a competitive fight, but I do see Otto either winning a decision or stopping him late.”

The 30-year-old Wallin (22-1, 14 KOs, 1 NC) tested Tyson Fury more than many expected during their competitive 12-round bout two years ago at T-Mobile Arena in Las Vegas. Wallin wants another shot at England’s Fury (30-0-1, 21 KOs), but he’ll have to beat the hard-hitting Whyte (28-2, 19 KOs) to make that rematch a realistic possibility.

Regardless, Salita saw plenty of improvement in Wallin during his two subsequent victories over American veterans Travis Kauffman and Dominic Breazeale.

Wallin stopped an injured Kauffman (32-4, 23 KOs, 1 NC) in the fourth round of their August 2020 bout at Mohegan Sun Arena in Uncasville, Connecticut. Six months later, Wallin returned to Mohegan Sun and beat Breazeale (20-3, 18 KOs) relatively easily in their 12-rounder.

Showtime televised Wallin’s past two bouts, but DAZN will stream Whyte-Wallin worldwide. Whyte will defend the WBC interim title he won back from Russia’s Alexander Povetkin (36-3-1, 25 KOs) in his most recent action, a fourth-round stoppage March 27 at Europa Point Sports Complex in Gibraltar.

“This is the most competitive fight in the heavyweight division,” Salita said. “I believe Otto is an elite heavyweight, as he showed versus Tyson Fury. He’s gotten better with his two wins against Kauffman and Dominic Breazeale. And I think he’s gonna take it up a notch and even raise to another level in this fight with Dillian Whyte. It’s a great fight. I believe that Otto’s gonna come out victorious and have a version of the heavyweight world title.”