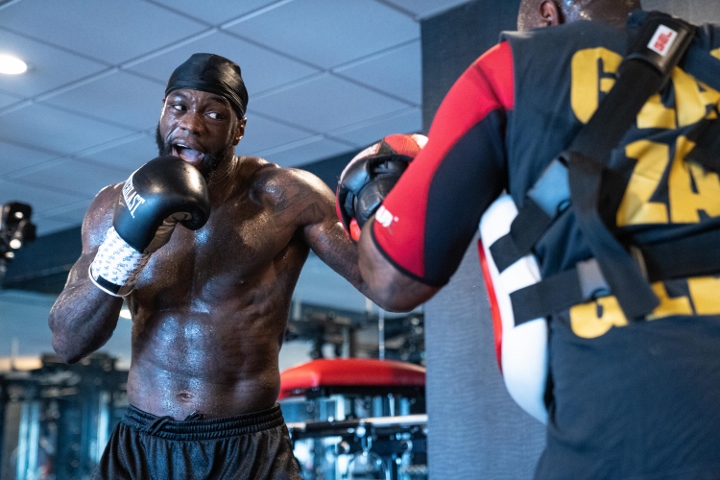 Deontay Wilder is coming off a career-low and debilitating defeat to Tyson Fury, but his confidence is still sky-high heading into the trilogy fight. (photo by Ryan Hafey)

“You’re looking at a rejuvenated and reinvented Deontay Wilder. The old Deontay is no longer there. I can’t explain it to you, I have to show you on October 9. I’m looking forward to it and I can’t wait,” Wilder said.

Following the fight, Wilder pointed to a litany of reasons as to why he lost that night, including allegations targeted toward his since-fired trainer Mark Breland, alleging that Fury’s gloves were compromised, critiquing referee Kenny Bayless’ performance and that the heavy costume he wore to during his ringwalk zapped his energy.

After months of back of forth negotiations for the trilogy — a fight that was originally scheduled for July 24 but rescheduled after Fury contracted COVID-19 — Wilder is finally nearing toward the finish line for a shot at revenge.

Former heavyweight contender Malik Scott has replaced Breland as the new coach in tandem with longtime co-trainer Jay Deas. According to the near-36-year-old Alabaman, it was the necessary change he needed to refresh and regroup.

“This has hands down been the best training camp I’ve had in my entire career. Sometimes you need events to happen in life to bring about changes that you need. We’ve had no distractions and I’m just in a happy state mentally, physically, emotionally and spiritually,” said Wilder.

“Malik Scott is a wonderful person and trainer. We met years ago sparring with Tomasz Adamek. We clicked right away and we’ve formed a real bond and brotherhood. I have so much love around me in this camp, that I’m not dwelling on anything negative.”

Wilder has perhaps one last shot at entering the world title picture and disrupting the heavyweight division should he win against Fury, much like Oleksandr Usyk did during his unanimous decision victory over Anthony Joshua to claim the WBO, WBA, IBF and IBO titles.

The 2008 United States Olympics gold medalist — a betting underdog versus Fury — is saying all of the right things ahead of the fight to mentally prepare himself for the tall task.

“I feel amazing. It’s past good or great. This time that has passed has been great for me. With the more time that’s passed, the more that we’ve been able to work on different little things and perfect them. You can’t always be perfect, but that doesn’t mean you can’t train to be perfect,” said Wilder.

“I’m super focused. I’m more focused now than I’ve even been in my entire career. This is the second phase of my career. I had fun winning and defending the title for five years. At this point, we’re just serious about everything. I’m in a happy place and I’m glad that I’m here.

Fury versus Wilder III takes place Oct. 9 at the T-Mobile Arena in Las Vegas and will be co-distributed via FOX and ESPN pay-per-view.