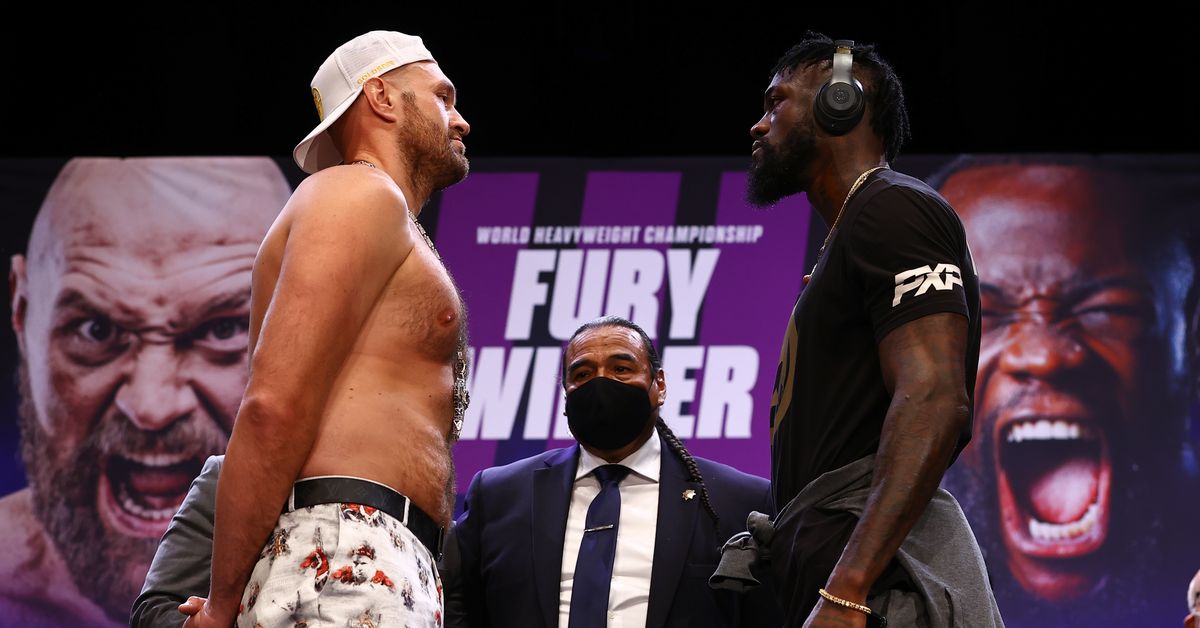 Tyson Fury vs Deontay Wilder 3 headlines what may not be the busiest schedule in terms of amount of shows, but at least a week with a true big fight again, plus a good-looking show that afternoon on DAZN, as well.

ESPN2 and FS1, 5:00 pm ET, Fury vs Wilder 3 press conference. There will also be live streams from PBC and Top Rank, one assumes, and if so we’ll have streams for you. Bad Left Hook will have live coverage.

ESPN2 and FS1, 5:00 pm ET, Fury vs Wilder 3 weigh-in. Same as the presser, surely there will be live streams, and we’ll be here with coverage. Bad Left Hook will have live coverage.

DAZN, 2:00 pm ET, Liam Smith vs Anthony Fowler. This card is going to fly under the radar this week, for obvious reasons, but Matchroom have put together a good looking show in Liverpool that should have nice action. Along with Smith-Fowler in the battle of Liverpool, Ted Cheeseman faces Troy Williamson for Cheeseman’s British 154 lb title, Shannon Courtenay defends her WBA 118 lb belt against Jamie Mitchell, and more. Bad Left Hook will have live coverage.

BT Sport (UK), 2:00 pm ET, Brad Foster vs Jason Cunningham, Ekow Essuman vs Danny Ball. This is not a bad show, really, and Callum Johnson will also return in a stay-busy sort of fight, as well as Liam Davies and others. But it’s just not going to move the needle for many given the direct competition and the fact that Fury-Wilder 3 owns the week.

ESPN App and FOX Sports App, 4:30 pm ET, Fury vs Wilder 3 “Early Undercard.” The earliest fights from Vegas. The thread for the whole show will be up, of course, but we’ll still be focused on the Smith-Fowler card through these early fights.

ESPN+, ESPN2 and FS1, 7:00 pm ET, Fury vs Wilder 3 Undercard. Do not get this confused: There will be a three-fight undercard on the PPV card, but these are more early fights fishing for last-minute buys. There will be two fights on this portion of the card. Bad Left Hook will have live coverage.

PPV, 9:00 pm ET, Tyson Fury vs Deontay Wilder 3. To be clear here, the undercard bouts on the PPV portion of the broadcast are Efe Ajagba vs Frank Sanchez, Robert Helenius vs Adam Kownacki 2, and Jared Anderson vs Vladimir Tereshkin. It’s an all-heavyweight PPV. You know what Fury-Wilder 3 is, what it’s for, what it’s about, why you should want to see it. No reason to go on. As always, we’ll be here. Bad Left Hook will have live coverage.

Oscar De La Hoya Believes Ryan Garcia – Gervonta Davis Will Be Announced “In The Next Few Days”
Dillian Whyte Wants Both Boxing, MMA Fight With Francis Ngannou: ‘I Would Bash Him’
Gary Russell Jr: “I Would Fight Isaac Cruz, I’ll Burn His Ass Up”
Eight to Remember: A brief history of top light-heavyweight fights in the UK
Jake Paul-Tommy Fury Officially Set To Fight February 26th In Saudi Arabia