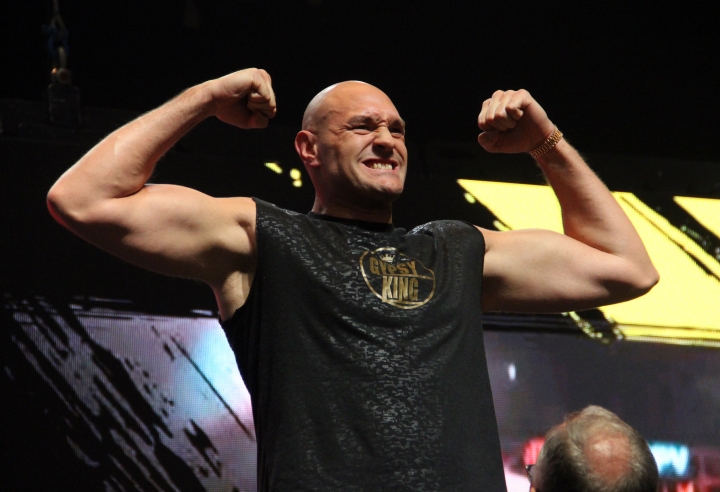 Fury assured BoxingScene.com during a recent interview that he indeed tested positive for the coronavirus toward the end of an intense training camp for another WBC heavyweight title fight with Wilder that was supposed to take place July 24 at T-Mobile Arena in Las Vegas. That was the second time, according to Fury, that he battled COVID-19 since the pandemic began in March 2020.

Nevertheless, BoxingScene.com has learned that Fury’s team never provided medical documentation of a failed COVID test early in July to anyone that represents Wilder in an official capacity or the Nevada State Athletic Commission. Wilder’s team didn’t demand that Fury’s representatives provide proof of his failed COVID test, however, and Fury was not required to submit such medical documentation to the NSAC once their ESPN/FOX Sports pay-per-view fight was postponed 2½ months, from July 24 to Saturday night.

“To the best of my recollection, the NSAC did not receive any documentation from the fighters that were scheduled to fight on the Fury-Wilder card,” Bob Bennett, executive director of the NSAC, told BoxingScene.com in reference to the postponed July 24 event. “Additionally, none of our ringside physicians administered a lab-based PCR test to any of the fighters on the Fury-Wilder card.”

Tom Brown – the president of TGB Promotions, which represents Wilder – could not be reached for comment related to Fury’s failed COVID-19 test early in July. Tim Smith – a spokesman for Al Haymon’s Premier Boxing Champions, with which Wilder also is affiliated – declined comment.

Wilder (42-1-1, 41 KOs) couldn’t be reached for comment, either, but the former WBC heavyweight champion stated during a recent episode of “The PBC Podcast” that he believes Fury faked having COVID-19 to buy more time to prepare for their third fight.

“I can’t control what they’re doing on their side,” Wilder told co-hosts Kenneth Bouhairie and Michael Rosenthal. “I can’t control whether this is a lie or it’s the truth. You know what I’m saying? Because I don’t believe none of it, nothing that they’ve done. Anybody that’s been trying to run since July, anybody that’s paid hundreds of thousands of dollars to not fight, you can’t believe that person. You know? They trying to run away from it – I’m running to it. When it’s like that, you can’t believe nothing. You know, and honestly, I don’t believe he had no COVID. You know, look at his actions. Look at what he’s done. Been at different places and stuff like that. He definitely don’t act like it.”

Fury (30-0-1, 21 KOs), who stopped Wilder in the seventh round of their rematch in February 2020, mocked Wilder’s suggestion that he faked COVID to get out of fighting him again July 24.

“I don’t care what Deontay Wilder says,” Fury told BoxingScene.com, “because, you know, if we wanna take this publicly, then we have medical records by doctors here in Las Vegas who tested me. So yeah, I don’t think you can fake COVID with the PCR test, when they stick a big thing up your nose. You’ve either got it or you haven’t. You know, there would be no reason for me to want COVID and get out of a Deontay Wilder fight. Why would I wanna chuck away 20, 30 million dollars to fight someone I’ve already knocked out quite comfortable? Why wouldn’t I wanna take that, like a lottery win for free?”

Arum suggested in another interview with BoxingScene.com that Wilder didn’t need to take his word or Fury’s word for proof of Fury’s failed COVID test.

“I don’t know what [Wilder] believes or what he doesn’t believe,” Arum told BoxingScene.com in mid-September. “But what he should at least look into is the fact that once Fury got COVID, he immediately contacted the commission, or somebody did, and the commission doctors examined him and diagnosed him with COVID. So, what the f— is Wilder talking about? I mean, it isn’t like a fighter is out and says, ‘I need a postponement because I sprained my leg jogging.’ Then there’s always questions. ‘Was he really hurt?’ Blah, blah, blah.

Korn clarified to BoxingScene.com that Arum mistook the fact that the NSAC’s Obert is a managing member of Critical Mass Gathering Medicine PLLC for the commission handling Fury’s COVID test.