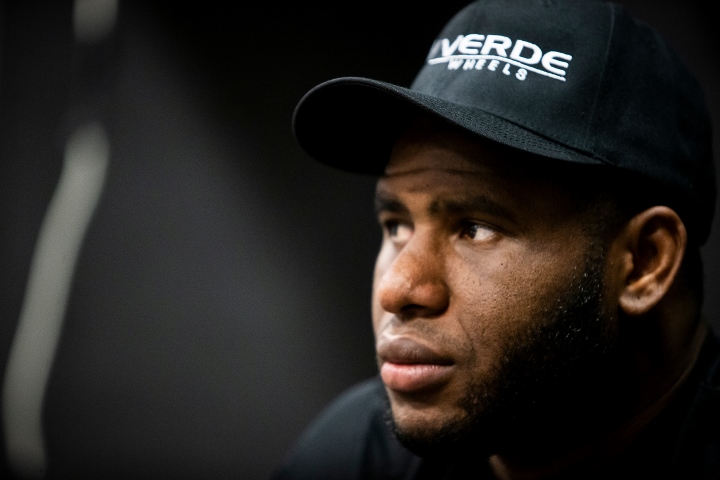 Sanchez inquired about boxing Ajagba in 2020, but he was told that the hard-hitting Nigerian heavyweight wasn’t interested. Now that Ajagba agreed to face Sanchez, the unbeaten Cuban contender cannot wait to prove himself against a knockout artist Sanchez considers the best opponent of his four-year pro career.

Ajagba (15-0, 12 KOs) and Sanchez (18-0, 13 KOs) will square off in an intriguing 10-round fight on the pay-per-view portion of the Tyson Fury-Deontay Wilder undercard October 9 at T-Mobile Arena in Las Vegas.

“This is gonna be a tremendous win for my career,” Sanchez told BoxingScene.com. “It’s gonna put me right in the mix with all the best heavyweights in the world.”

The technically sound Sanchez is confident that his multidimensional skill set will serve him well against Ajagba, who seems more limited athletically than his confident opponent.

“Everybody knows he’s got that really good straight right,” said Sanchez, who is trained by Eddy Reynoso. “That’s his best weapon. He’s managed to land that right hand on a lot of fighters, but none of those fighters have the kind of experience that I have. And I have all the other tools to win. Every other box you could check is in my favor – speed, agility, ring generalship, stamina. Everything else is in my favor. My job is to just take away the one weapon he has, which I can do with all my tools.”

The 29-year-old Sanchez suspects his power has been underestimated entering this high-stakes fight.

“I really believe in my heart that I have good power,” Sanchez said, “that when I land, I can knock him out. I’m coming to just win, to box, fight my game plan and win the fight. But if I connect, [a knockout] could happen. It just has to happen organically.”

Iago Kiladze knocked down Ajagba in the third round of an entertaining slugfest Ajagba won by fifth-round knockout in December 2019. The 6-feet-6, 240-pound Ajagba dropped Kiladze (27-5-1, 19 KOs) during the second and fifth rounds before their fight ended at Toyota Arena in Ontario, California.

Two fights later, Ajagba, a 2016 Olympian, made his debut with Bob Arum’s promotional company, Top Rank Inc., and a new trainer, Kay Koroma. Caesars Sportsbook lists Sanchez as a 2-1 favorite over the 27-year-old Ajagba, who is 2-0 with Koroma in his corner.