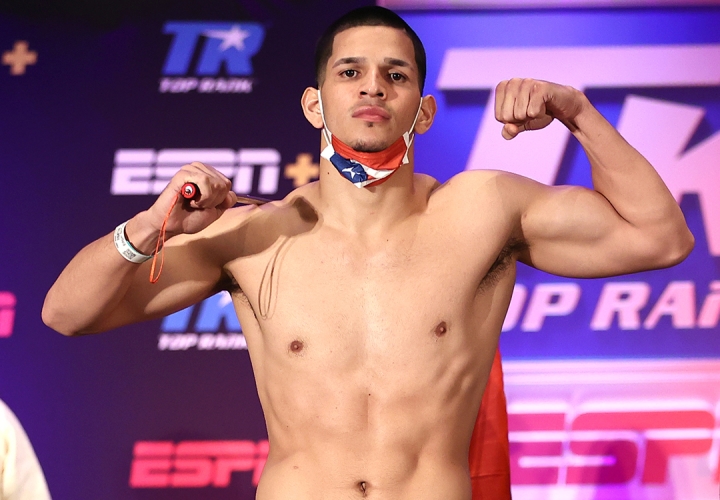 He has yet to headline a show, though that has never prevented Edgar Berlanga from being the talk of the night whenever he fights.

The Brooklyn-bred Nuyorican plans to bring that type of energy into what is arguably the biggest show of 2021. The night is dominated by heavyweight action, including a trilogy fight between lineal/WBC heavyweight champion Tyson Fury (30-0-1, 21KOs) and former long-reigning titlist Deontay Wilder (42-1-1, 41KOs) atop an ESPN+/Fox Sports Pay-Per-View from T-Mobile Arena in Las Vegas.

Berlanga (17-0, 16KOs) will headline the preliminary undercard preceding the PPV portion of the show, facing former title challenger Marcelo Esteban Coceres (30-2-1, 16KOs). The undefeated super middleweight has four heavyweight fights ahead of him though intends to serve as the entertainment bar to which the rest of the show is judged.

“By the time they get to the Fury-Wilder fight on Pay-Per-View, they’re gonna be like ‘Wow, Edgar Berlanga did his thing. He had another tremendous KO.” My fight’s what they’re gonna be talking about.”

Heading into 2021, Berlanga was the talk of every card on which he appeared primarily due to his racking up 16 first-round knockouts in as many pro fights.

That streak came to an end this past April, though not his unbeaten ways as the rising contender went eight full rounds in dominating veteran Demond Nicholson (23-4-1, 20KOs). The bout took place in front of a sold-out crowd at Silver Spurs Arena in Kissimmee, Florida. Berlanga sold the lion’s share of tickets including nearly all of the floor seats on a night where he was chief support to WBO featherweight titlist Emanuel Navarrete’s 12th round knockout of local favorite Christopher Diaz.

Berlanga is a little further down the lineup this weekend, though still a prominent part of televised coverage. His fight with Coceres will air live on ESPN2 and FS1 preceding the PPV telecast. A win on Saturday will lead to an anticipated homecoming, with the unbeaten super middleweight due to appear in the chief support of a December 11 show featuring former three-division titlist Vasiliy Lomachenko on Madison Square Garden property in New York City.

“The idea is to look good here like I always do and then head back to my city,” notes Berlanga. “I’m going to be co-main event there but still the main event as far as my fans back home are concerned.”