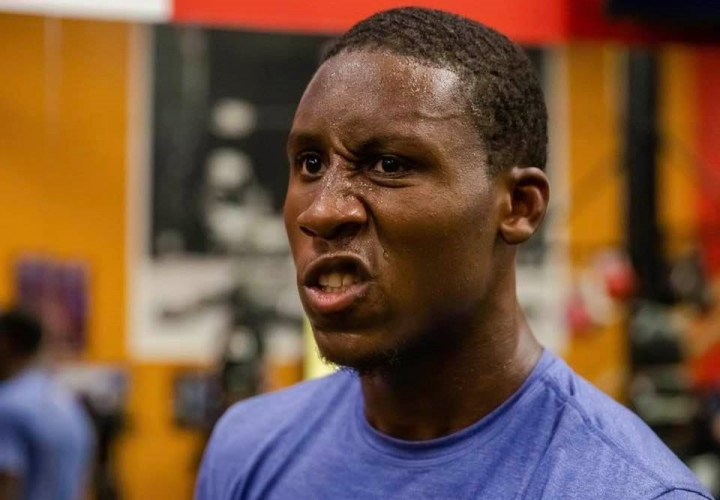 Bruce Carrington has been on BoxingScene.com longer than most staffers here, so it’s only fitting that “Shu Shu” checks back in before his first pro bout this Saturday against Cesar Cantu on the Tyson Fury-Deontay Wilder III undercard in Las Vegas.

“They told me I was the first amateur that they used to cover back around that time,” said Carrington, whose videos began being posted on this website as early as 2006, when he was just nine years old. “I was the young kid that was around by popular demand, and they used to catch me at these boxing shows I would be at, like when Lou DiBella threw those Broadway Boxing events. They would grab me up and get an interview. It was fun.”

Before people became viral sensations, Brooklyn’s Carrington was as close as you could get to it in the boxing bubble, especially in the NYC area where he became a bright light for the local fight community. “Shu Shu” was going to resurrect the scene, and his father, Bruce Sr. was going to make sure everyone knew it. So before he was even in junior high, he was giving interviews.

“It gave me a lot of practice,” said Carrington, 24. “My dad was the guy that put me out there, and he had the idea to put me out there pretty early. He always told me to get a lot of practice, so I’d have a lot of things down pat by the time today comes. And I would say I’m ahead of a lot of people when it comes to being in the public eye and not being as nervous as the average boxer would be. I was working on my vocabulary, being articulate, and just being ahead of the game for the most part.”

Talk to him for any length of time and you’ll see the benefit of that early – albeit unorthodox – media training. Carrington is comfortable in an interview setting and he knows how to tell his story, both rarities among younger athletes. It’s an edge that will grow larger and more important as the featherweight prospect rises up the ranks and gets to the elite level. There, everyone can fight. It’s the ones who connect to their fan base who become stars.

Just don’t ask him if he goes back and watches those old BoxingScene videos.

“Oh no, I hate watching them,” he laughs. “It’s so embarrassing sometimes. I look at myself now and how I handle interviews to all the way back then and it’s so funny. But people love watching them. There was one interview where I had the Mike Tyson tattoo on my eye that my dad had painted on me, and everybody talks about that one to this day. I was such a fearless kid – I just wanted to talk in front of the camera. ‘Yeah, this is a symbol of Mike Tyson, and I’m gonna go to the Olympics and I’m gonna knock them out.’ All types of stuff. I just could not believe how fearless and confident I was in front of the camera around that time. It was ridiculous.”

So what happened from Carrington being the nine-year-old prodigy to now a 24-year-old pro? Well, he became one of the country’s best amateurs, even earning an alternate spot on the 2016 U.S. Olympic Boxing team. That was a big deal, and many expected Carrington to make his move to the pro ranks then. But he didn’t. And his reason why is as blunt an assessment as you’ll see in this sport.

“I kept it honest with myself and I knew that I had no experience internationally at the time,” Carrington said. “I knew I had good talent, but I just didn’t have enough experience. I was 19 years old, I was really young and I also didn’t have my fan base where I wanted it to be around that time. I had New York behind me, but it just wasn’t where I wanted it to be. So there were multiple things that I really wanted to work on and plus, I really wanted to have more experience on the USA team. I knew that I wasn’t ready for that transition to turn pro yet.”

Shu Shu circled 2020 on his calendar as his goal date to make the Olympic team and go to Tokyo, and he hit his mark, rising from the number eight seed in the Olympic trials to defeat number one seed Duke Ragan and kick off a memorable run that ended in a 4-0 record in the trials and the best boxer award for the tournament.

He was going to Japan as a member of Team USA. Until he wasn’t.

“I won that, got on the team, waited – and then COVID happened,” said Carrington, recalling the moment when the pandemic pushed the Tokyo Games from 2020 to 2021. “I waited another year and then COVID stopped another qualification tournament in 2021 in Argentina, and then I get put off the team?”

Yes, put off the team, as USA Boxing opted to put the higher-ranked Ragan on the team, despite Carrington beating him in the trials.

“It was heartbreaking because I had nothing in my power I could do to stop it,” said Carrington. “All my life through boxing, I’ve always known that if you win something, it’s on you, and if you lose something, it’s on you. You can’t blame this person, that person, everything is on you. You earned everything you get. But here, I could not do anything about it. I was powerless.”

And it hurt more than any blow he ever took in the ring.

“I cried about it like a baby because that was a dream of mine since I ever started boxing,” he said. “I was always around guys like Saddam Ali and Marcus Browne. My stablemates were Olympians and I saw all praise and glory that they got, and I wanted that. And I worked so hard for it for all these years. Then I watched the opening ceremony and it was pretty heartbreaking too, because it brought all those emotions back. But I kept my head high because everybody that was on the team were my friends and I was so happy for them and I knew how much work they put into getting to that position as well, so I just cheered them on and I was happy that everybody came out and performed well. We came out with three silver medals, one bronze medal, and it was a long time since the USA has performed like that. But it was a bittersweet moment.”

It was just a moment, though, and Carrington has moved on, knowing that he has been through worse situations in life and still made it to where he is today. It’s an inspiring story, not just to Carrington and his friends and family, but to those back in Brownsville, who are seeing a local kid do good. When I tell him that people in NYC are looking forward to his debut and pro career, he beams, then laughs, saying, “That’s some pressure you’re putting on my shoulders.”

He knows pressure, and it has little to do with what happens on fight night. In Brownsville, any walk to the corner store could be your last, any random encounter could turn fatal. It did for Carrington’s brother, Michael Hayden, in 2014, when the 20-year-old was shot and killed on his way home from a video store. As Pat Russo, a staple on the NYC boxing scene for decades, told the NY Daily News, Hayden was “a good kid with a bad address.”

Carrington survived those streets, a journey chronicled in the short documentary “Brownsville Born” (https://vimeo.com/353418061), but he’s never forgotten them.

“I always make sure that I try to be a good role model to anybody that’s watching me,” he said. “I come from Brownsville and that’s the roughest, toughest neighborhood in New York, but I accepted that role because people know me around the way and it keeps this pressure on me because I know everybody’s watching me, so I watch my steps and make sure I give a good image to everybody. I just want to be that blueprint and that motivation for anyone that feels like they can’t do it. I am you. I don’t want people to ever think that they can’t do something. I’m not the exception to the rule. No, I put blood, sweat and tears into this work and that’s something that you have to do in order to get on the level that I am or past me. It puts a smile on my face every single time I see someone thrive and they make it out of the hood and make it past their adversities. It’s something I can relate to because I went through a lot of different adversities in my life. Family passing, my brother died back in 2014 from gun violence, and a lot of people have their own adversities that are tougher than mine. You can get past it, you can work through it. You just have to have that locked-in focus and you’ll get what you want.”

Carrington is still locked in. He still hasn’t had his first fight in the punch-for-pay ranks, yet he’s already a winner in life. That counts for something, but he’s not smelling the roses yet.

Shu Shu is all grown up. And he made it. Just like we all hoped he would.