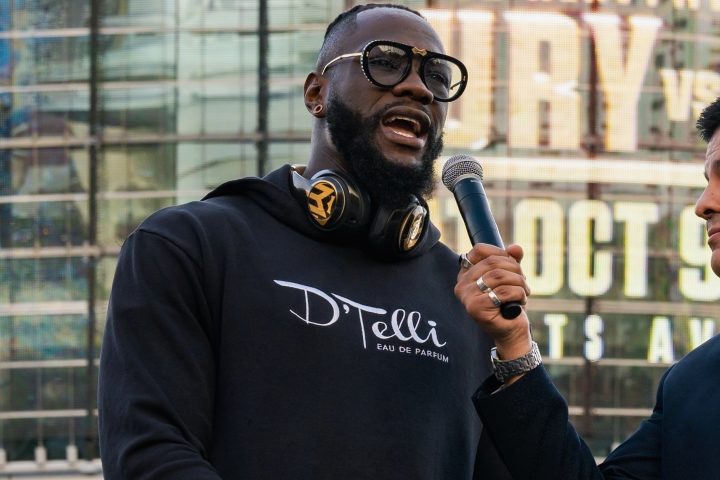 If former WBC heavyweight titlist Deontay Wilder (42-1-1, 41 KO) is looking for extra inspiration heading into this Saturday (FOX PPV, 9 PM EST), it’s a name he might want to look back to. Wilder is attempting to defeat Tyson Fury (30-0-1, 21 KO) for the first time in three tries this weekend. A victory would make Wilder history’s heavyweight champion of the world, an honor Fury has denied him in both their contests.

The last time it took someone three tries against the same opponent for similar stakes, it was Walcott who broke through with a single shot.

Walcott’s tough luck in chasing the title went back farther than his rivalry with Ezzard Charles. Walcott appeared to do enough to wrest the title from Joe Louis only to be denied the decision. In the rematch, with a lead on two cards, Louis stopped Walcott in the eleventh round.

When Louis retired, Walcott and Charles were matched for the NBA version of the title and Charles won the first fight in their series. By the time they squared off again, Charles’ claim to the crown was universal and Charles again won by decision. Matched for the third time, and down on two cards, Walcott found a left uppercut for the ages.

Wilder hasn’t solved Tyson Fury yet. The 2008 Olympic bronze medalist lost more rounds than he won the first time yet came within a single count of stopping Fury in the final round of their first fight. Wilder lost almost every round of the rematch on the judges cards and was dropped twice before his corner stopped the fight in the rematch.

It’s a lot to overcome this weekend.

As was the case for Walcott in the third Charles fight, as was almost the case for Wilder in the first Fury fight, rounds don’t matter if the right shot lands.

It’s what makes this weekend’s third fight between Fury and Wilder so interesting despite what has come before. The accumulated evidence suggests Fury is the better boxer round over round but Wilder only has to be better for a count of ten. With almost two years to find something new, to locate a formula with new head trainer Malik Scott that secures a finishing count, Wilder has the power to make us wonder.

The time between the second and third fight doesn’t hurt either. Despite neither man taking a fight since February 22, 2020, time away and Oleksandr Usyk’s upset of Anthony Joshua two weeks ago lend this fight a renewed freshness. Usyk’s win was a reminder that being a betting odds favorite only matters until the bell rings.

While Walcott’s pursuit of the crown versus Charles stands out for the number of tries it took, the number of men who have lost heavyweight title fights only to avenge defeat with the crown again on the line in the gloved era is short.

Jack Sharkey was the first, losing a battle with Max Schmeling for the vacant title in 1930 before defeating Schmeling for the title in 1932. Floyd Patterson did it to become the first to capture the heavyweight title twice when he knocked out Ingemar Johannson in 1960 but he couldn’t do it again after a title loss to Sonny Liston.

Muhammad Ali twice avenged a loss to Joe Frazier, with the first of those two wins in a non-title affair. Ali made a successful defense of the title against Frazier after Ali regained the crown from George Foreman. Ali did it again when he reversed a defeat to Leon Spinks for the title in 1978.

Evander Holyfield regained the lineal throne he lost to Riddick Bowe. Holyfield lost his second crown to Michael Moorer and, while Holyfield never regained history’s crown, he did defeat Moorer in rematch to unify a pair of sanctioning body belts a few years later.

Lennox Lewis lost and won WBC versions of the heavyweight title against Oliver McCall and then lost and won belts and the lineal crown versus Hasim Rahman in the twilight of his career. Wladimir Klitschko lost a bout for the vacant WBO belt against Lamon Brewster, later avenging the loss in an IBF title defense. Joshua avenged his loss to Andy Ruiz for three alphabet belts.

Of the men who got at least one of their revenge wins with the lineal heavyweight title on the line, Sharkey, Patterson, Walcott, Ali, Holyfield, and Lewis are all in the the International Boxing Hall of Fame. Just winning history’s heavyweight title has all but guaranteed induction. Marvin Hart, Primo Carnera, Leon Spinks, James Douglas, Moorer, Shannon Briggs, and Rahman are the select fraternity of former lineal heavyweight champions who are not enshrined, with Moorer currently on the ballot.

Tyson Fury is the rightful favorite this weekend. It doesn’t mean Wilder’s right hand can’t erase the odds. If Wilder pulls it off, he will add his name to the storied list of boxing’s historical heavyweight champions and, given the precedence of the past, might just knock down the door to Canastota along the way.