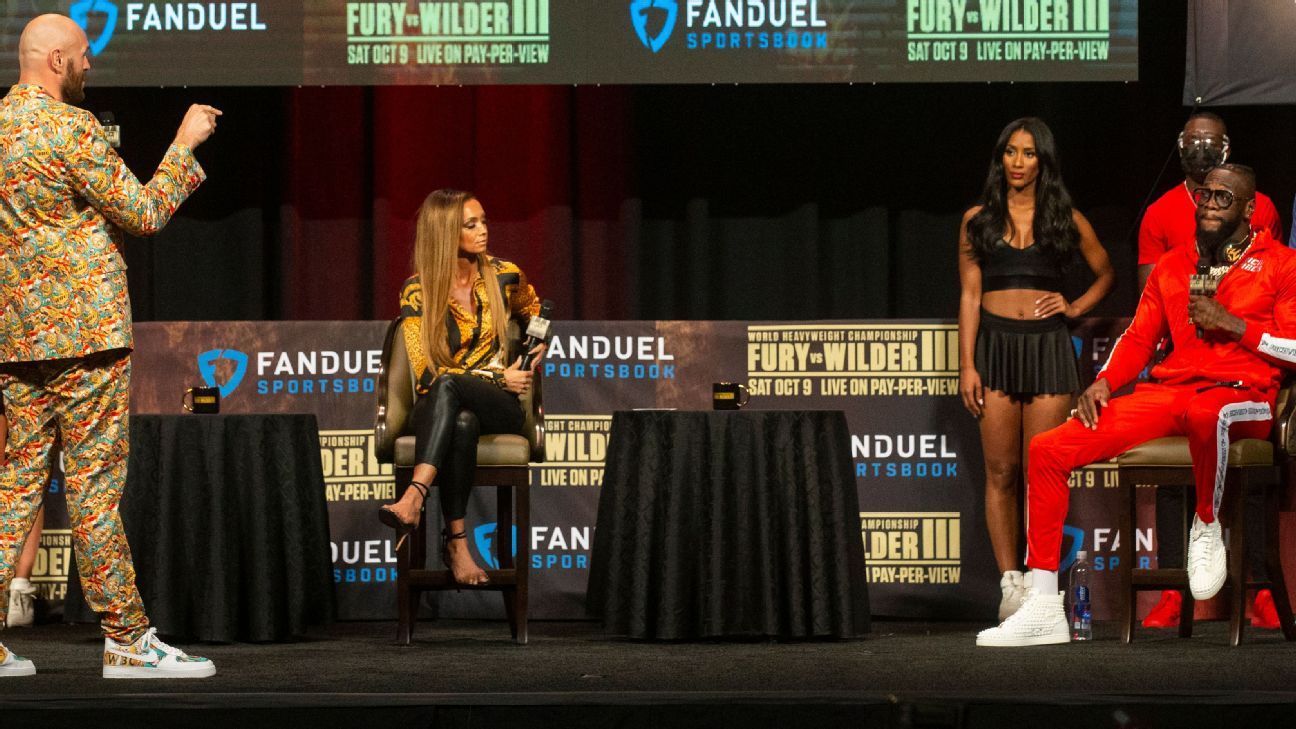 The lead-up to the trilogy bout has been so heated that Top Rank chairman Bob Arum decided to cancel the traditional faceoff ahead of Saturday’s fight at T-Mobile Arena for the heavyweight championship (9 p.m. ET, ESPN+ PPV).

“He says he wants to do bad things to me and that he’s got all this anger and malice and aggression,” said Fury, ESPN’s No. 1 heavyweight and No. 6 pound-for-pound boxer. “I don’t want to hurt Deontay Wilder. I just want to beat him in a fight.

“Those who hold hot coals with aggression are the ones who get burned. He knows he’s lost twice and that he’s going to lose the third time.”

If the gloves indeed contained a foreign object, as Wilder claims, Fury asked why the challenger still employs the man who inspected those gloves before the fight. Jay Deas is no longer Wilder’s head trainer but he’s still on the team and will work the corner on fight night.

Deas was replaced by Malik Scott, who Wilder knocked out in one round in 2014. Mark Breland, formerly an assistant trainer, was fired by Wilder for throwing in the towel in Round 7.

“Mark Breland, he saved your life that night,” Fury said. “You ought to give him a pay raise. … If I only won because I cheated, what was the point of changing everything?”

Wilder (42-1, 41 KOs) continued to assert — without any proof — that Fury loaded his gloves and claimed the gloves bent in unusual ways. The Nevada State Athletic Commission also inspected the gloves and found no issues.

The accusations originally were made by Wilder in October 2020 in the midst of a contractual dispute regarding the third fight. The deal for the second fight contained a rematch clause — which Wilder quickly exercised — but after many failed attempts to find a date (complicated by the pandemic), Fury said he was moving on from the bout and onto a fight with Anthony Joshua.

Fury (30-0-1, 21 KOs) had a deal in place to meet Joshua for the undisputed heavyweight championship on Aug. 14 in Saudi Arabia, but in May the independent arbitrator ruled that Fury indeed owed Wilder a third fight.

“I will go to my grave believing in what I believe in,” said Wilder, 35. “I don’t have to manipulate my gloves. I don’t have to do those things. … You have no power, you’re not a knockout artist. I went out on my feet, I had a disloyal trainer.”

“That’s a knockout,” shot back Fury, who scored two knockdowns of Wilder in the last fight. “I don’t fear you because you’re a lying little dosser, an insecure piece of s–. You’re getting knocked the f– out.”

Wilder, ESPN’s No. 2 heavyweight, went on to ask why Fury won’t deny all the allegations.

“It’s all true, I had knuckle dusters on,” Fury, 33, said in jest and then claimed Deas must have been in on it since he inspected the gloves. “I don’t have to deny it, it’s all true.

“Wilder is a weak person mentally and I’m going to knock him out on Saturday night. I obliterated him in the rematch and I see much more of the same in the third fight.”

Wilder, an Olympic bronze medalist, has offered other excuses for the defeat — the first of his career — ranging from his ring walk costume that he claims weighed more than 40 pounds and weakened his legs to Breland conspiring against him.

But the only reason he hasn’t offered is that Fury was the better fighter on that night.

“I don’t have anything to prove,” Wilder said. “I have nothing to lose and everything to gain. Your legacy only dies when the desire for the sport dies. I’m well alive right now. My energy is like my mind, it’s very violent.”

When they met in December 2018, Fury was forced to settle for a disputed draw. He appeared to win every round besides the ones in which Wilder scored knockdowns (Rounds 9 and 12).

Wilder has proven he can hurt Fury; Fury showed he can outbox Wilder off the back foot but also bully his foe around the ring. With a win Saturday, one of them will be on the brink of an undisputed heavyweight title fight at long last.