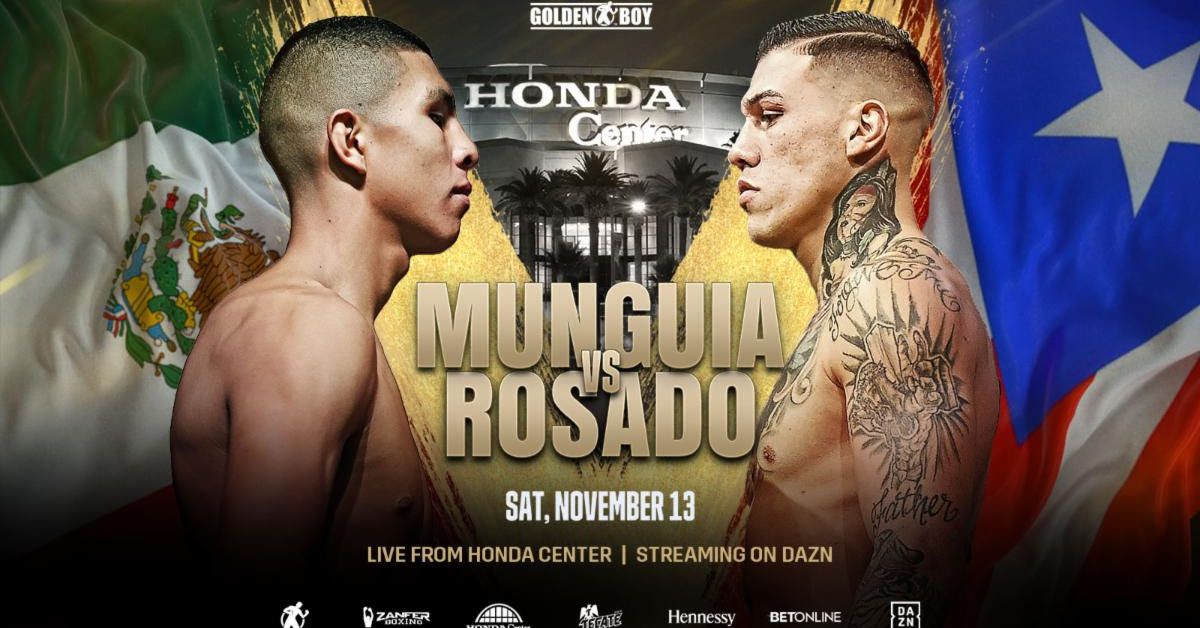 Jaime Munguia and Gabriel Rosado are set for a 12-round middleweight main event on DAZN, coming Saturday, Nov. 13, from the Honda Center in Anaheim, Calif.

Munguia (37-0, 30 KO) and Rosado (26-13-1, 15 KO) met up, kind of, at a virtual press conference to discuss and promote the fight. The veteran Rosado, 35, is coming off of a big upset win over Bektemir Melikuziev, while the 24-year-old Munguia beat Kamil Szeremta after six rounds, both bouts coming on the same June 19 card in Texas.

“I think the last couple fights since I actually linked up with Freddie Roach, I think it shows. This is an improved Gabe Rosado. I have experience; I’m putting in the work. Yes, my record is deceiving. I wasn’t the guy with the machine behind me, with the big promoters, big management behind me, so a lot of times, I went into fights where the other guy was the favorite. And there have been fights that should have gone my way, where I got the shit-end of the stick. And it showed in the Danny Jacobs fight. I just saw that fight, and I was like, ‘wow, clearly I out-boxed him.’ But you know, that’s just the beauty of it, that the fans get to see it, and the fans at the end of the day can’t be fooled. I made a statement in my last fight, which I think will be Knockout of the Year. So we’re excited about this Munguia fight.

“I’m excited, but I am not going to give up the game plan, obviously. I want to do a little bit of everything. I’m going to bang, I’m gonna move, I’m gonna box, and I’m going in to win. I’m not just going to win on the scorecards; I want to get a knockout. I want to keep that momentum going because I think it’s important. These are the kinds of fights where it has to live up to the expectations of the fans. So you have to be a hundred percent, and you gotta be willing to be all in, in the ring. It will go down into the history books. This is one of the fights that they’ll be talking about 20 to 30 years from now.

“Bek was a two-time Olympian, I believe, 290 knockouts in the amateurs and was crushing his opponents in the pros. He was a big, strong, powerful guy, so that [win for me] was a statement. Munguia could have gone the easier route. He could have gone with his mandatory, so you have to respect the guy that says, ‘no, I want Rosado.’ He is willing to give the fans what they want, and that’s what makes this fight special, that t’s a fight that the fans asked for. In boxing nowadays, with the politics, it’s hard to give the fans what they want. This right here is just like an early Christmas gift for the fans. It’s gonna be lit.”

“Our strategy right now is to focus on working on my general boxing skills. Making sure I keep my distance, keeping my hands up. We noticed that Rosado had an excellent right punch in his last fight, so we want to prepare to prevent him from giving him that advantage. We have been working a lot on my speed and making sure I can move.

“Yes, I won a world title at 24. But also, all these years I have gained a lot of experience. I feel like my boxing has improved, and we are ready for bigger challenges. After Rosado, there has been a lot of talk about a fight with Derevyanchenko, Jacobs, and Golovkin.

“This is going to be a fun night, a night full of punches. It will be a war. Everyone knows that Mexico vs Puerto Rico are always great fights. I honestly see a very motivated Gabe Rosado. He is strong and willing to give a good fight. I can assure you that we will leave everything in the ring and bring something great on fight night.”