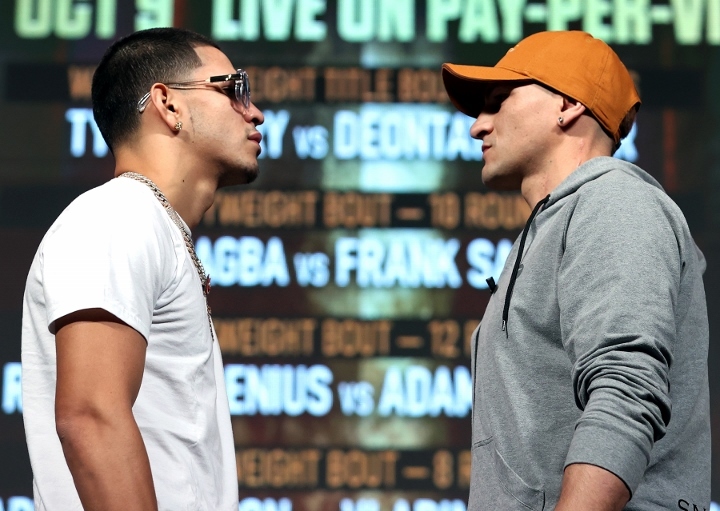 Edgar Berlanga is eager to resume his knockout ways.

The most recent bout ring appearance saw the unbeaten super middleweight prospect go the distance for the first time in his career, claiming a lopsided eight-round, unanimous decision win over Demond Nicholson. Brooklyn’s Berlanga had never previously seen the second round of a pro fight before that April night on ESPN in Kissimmee, Florida, though managed to handle his business in showing he was more than just a mindless puncher.

With a sixteen-fight knockout streak brought to a close, the intention is to now begin a new run. The first step comes in his most experienced foe to date, as Berlanga (17-0, 16KOs) faces former title challenger Marcelo Esteban Coceres (30-2-1, 16KOs) in his first scheduled ten-round contest.

“Make no mistake, this guy is getting knocked out.”

The bout serves as the headliner of the preliminary undercard on ESPN2 and FS1 preceding a Pay-Per-View event topped by the heavyweight championship trilogy clash between defending champ Tyson Fury (30-0-1, 21KOs) and former WBC titlist Deontay Wilder (42-1-1, 41KOs).

It’s easily the biggest stage to date on which Berlanga appears, though with every intention of stealing the show. He also has the chance to prove his worth as a rising contender. Coceres is best remembered for causing all sorts of problems for then-unbeaten two-division and reigning WBO super middleweight titlist Billy Joe Saunders before suffering an 11th round knockout in their November 2019 title fight.

At the bare minimum, the 24-year-old Berlanga plans to at least match the feat if not trump the performance. It’s not a specific goal, just one in which he is confident in being the case.

“I just know that as long as I do my thing, it’s going to happen,” vows Berlanga. I don’t have to force it, just let it come natural and let everyone know I’m the present and I’m the future of this division.”