IT WAS AROUND 4 a.m. on Feb. 23, 2020. Malik Scott had just landed back in Los Angeles. He was tired. He was distraught, and quite suddenly, he was being offered a new job.

“I’m going to make changes,” Deontay Wilder said. “I want you to be my head trainer.”

There was already debate as to whether Wilder was in an optimal frame of mind. Hours before, he had suffered his first defeat — not merely a stoppage, but a kind of ritualized humiliation at the hands of Tyson Fury. Fury took the WBC heavyweight belt Wilder had worn for six years in that rematch. But it was trainer Mark Breland, at least to Wilder’s distressed manner of thinking, who took his pride. Breland’s throwing in the towel was widely praised as an act of sound judgment and great mercy. But Wilder — who had long promised to banish anyone who surrendered on his behalf — considered it an act of betrayal.

But which Wilder was on the phone? The man himself or his outsized persona? Aside from greed, the most potent force in boxing is ego. One cannot be the heavyweight champion of the world — a real champ of the Baddest Man variety — without a monumental ego. It’s a job requirement, at least for those very few whose job is performed basically naked to the world, trying to knock out other very large and dangerous men. But the ego inevitably comes with commensurate insecurities. What got you that belt in the first place can also blind you. That’s why “Baddest Men” get damaged. And that’s why Scott didn’t jump at the job but rather, improbably, started setting conditions.

First was that none of the subsequent conditions interfere with their relationship. Scott had been, by turns, Wilder’s sparring partner, opponent (KO’d by in the first round on the Ides of March 2014) and, in the years since, his aide-de-camp, holding mitts for the champ and offering advice when asked for his counsel. Along the way, they become like brothers. Now, if Wilder were really serious, the dynamic between them would have to change, at least during working hours.

Second, Wilder would have to look in the mirror. Scott wasn’t talking about the persona — the superhero who had walked out earlier that night in a 40-pound armored suit of lights. He meant the man himself, the defeated champion, busted up as he was. That guy needed to understand what had happened.

“Bro, we didn’t lose a boxing match,” Scott recalls saying to Wilder. “We got beat up. … You have to look at yourself. Say, ‘I’m wrong. I’ve been going about it the wrong way.'”

The final condition was a sober assessment of the opponent who by now had become their mortal enemy. “Tyson Fury is one of the best mobile heavyweights of any era,” Scott says. “Tyson Fury beat us up. We have to make changes. If we don’t, it will be worse next time.”

In other words, Wilder could tell the world that the 40-pound suit — itself a token of a world-class ego — had left his legs fatigued. He could claim (as he eventually did, without anything approximating proof) that Fury’s gloves were loaded. But the actual work — the training — would have to be conducted with absolute humility.

Scott waited for the notoriously headstrong Wilder to disagree.

“All that I was saying?” Scott recalls. “Deontay knew it already.”

CHAMPIONS WHO’VE SUFFERED traumatic first defeats tend to sign with established trainers. Miguel Cotto turned to Freddie Roach. Lennox Lewis and Wladimir Klitschko found Emanuel Steward. They weren’t merely brand names, but locks for the Hall of Fame. Scott, for his part, though, had never trained a pro, run a camp or held down a corner through the hectic miasma of fight night. Most of his training experience has come at a club in West Hills, California, where he works with kids 12 and under for free, as that’s what the great Fred Jenkins did for him at the ABC Gym back in North Philadelphia.

Maybe you’re wondering, then, what business Scott has in Las Vegas on Saturday night for the third act of an epic trilogy with eight-figure purses on the line?

Or how a guy can train a best friend?

And even if he can, once Wilder gets hit, will he listen?

If so, you’re asking the right questions. But Wilder has been a pro for 13 years and neither Breland — unjustly fired, agreed — nor Jay Deas — who discovered Wilder as an amateur in Alabama — had gotten through to him. His bad habits — first among them that hubristic reliance on his great gift, the right hand — were only getting worse.

“The fact is,” Scott says, “we’re dealing with someone who knows how to deal with a right hand. You can’t just use one tool.”

“It’s not so much what he’s taught me, but it’s what he’s been able to bring out of me,” Wilder says. “And to do it on a consistent basis. That’s the difference.”

“The only possible drawback could be his lack of experience running the corner on fight night,” says Joe Goossen, who trained Scott for six years of his 38-3-1 pro career. “But Malik is a great listener and a great communicator. He’s got a high boxing IQ, and he gets excited about ideas. He can see and make the necessary adjustments. I think he’s going to be invaluable.”

Bottom line: Malik Scott is Wilder’s best shot. What’s more, if these past 20 months have transformed the fighter the way they have the trainer — a big if, yes — it’s actually a pretty good shot.

“I finally found what I’m supposed to be doing,” says Scott, 40, whose last fight was a unanimous decision loss to Luis Ortiz in 2016.

The first order of business was diagnostic. Scott spent three days sparring with Fury nine years ago in Brussels. He’d done countless rounds with Wilder. But other eyes — other vantage points — were needed, so Scott picked the ample boxing brain of his pro trainer, Goossen, and the aforementioned Jenkins.

Jenkins reminded his former student that a professional shouldn’t expect to land a right hand without an assortment of feints and decoys. Wilder, in his previous fights with Fury, had been offering none. And while it was too late to turn a 35-year-old from Tuscaloosa, Alabama, into a Philadelphia fighter, Jenkins reminded him just the same, “Deontay’s gonna have to go to that body.” 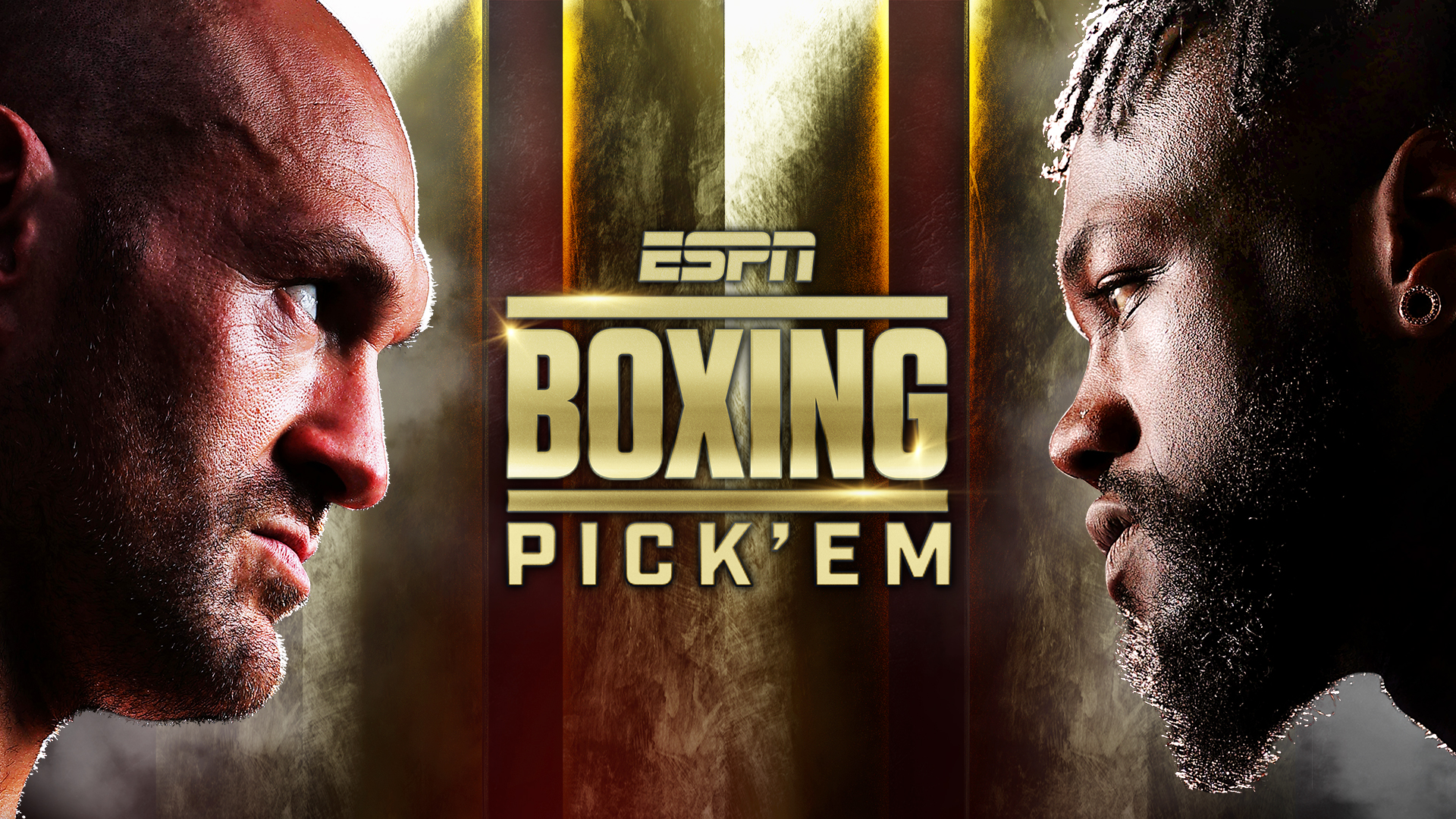 Play for FREE and compete for your shot at the $1,000 winning prize. Make Your Picks

Next came Scott’s nightly film study, sessions that typically lasted until 4 a.m. It wasn’t merely a matter of familiarizing himself with every available moment of Wilder’s and Fury’s careers. Scott watched everything, decades upon decades of video in an almost Talmudic way, scouring the esoterica for the applicable lessons.

Among those that he shared with Wilder was the conclusion of the second fight between Max Schmeling and Joe Louis. That was 1938. For Scott, however, it might as well have been last week. “What did Louis do when he had Schmeling hurt?” he asks. “He ripped that man to the body, broke his ribs. Then, when Max got up, he blinded him with a left and threw a short right hand.”

Simple. But only if you can keep your composure in a highly adrenalized state, something the excitably twitchy Wilder is not known for. Composure became the theme of their film study. There was a subtle tutorial in the way Evander Holyfield changed his rhythm in his second fight with Riddick Bowe and how he punched off that rhythm. Then there was George Foreman, the elder version, the manner in which he stalked his wounded prey.

“As fighters, we’re taught to step to our opponents,” Scott says. “But George? He walks. I mean, literally, walks. Like he’s going to the corner store or taking out the trash.”

Scott was asked if he wanted Wilder to do the same. “No,” he says. “I want him to have that attitude, that gall, that audacity. George didn’t get excited, didn’t rush.”

Like a hitman, he means. No histrionics, no quickening of the pulse. He just finished you.

But how does that pertain to Wilder against Fury? “When you go all wild, Fury is happy, especially when he’s hurt,” Scott says. “When you’re wild, he can get away, he can make you miss. Now you’re leaning. Now you’re making silent agreements on the inside because you’re tired from going wild. Now imagine if when Fury got up in the 12th” — among the most famously improbable moments in the history of the division, in the last round of their first fight — “Deontay didn’t rush. Imagine if Deontay was patient. There’s no way Fury makes it through the fight.”

That’s debatable. Scott’s larger point, however, is not. But even if Scott can alter Wilder’s mindset in the ring, what of his technique? No surprise, it starts with the jab, or lack thereof. Going into that first Fury fight, Wilder was landing eight jabs a round — and throwing more than 24 — according to Compubox data. In the three fights since, he’s landing fewer than three. Some rounds, he barely bothered to throw a jab.

It’s worth mentioning that going into the most recent fight, Breland’s greatest single gripe with Wilder was not throwing the jab. Still, Scott maintains it’s not merely about volume, but selection, citing a favorite of their film study, Larry Holmes vs. Gerry Cooney, 1982:

“Larry didn’t just go in there slinging right hands. He disguised the right hands with jabs. He jabbed to the shoulder. He jabbed to the core. He jabbed to the head. He would decoy by looking down and shooting up. Then he’d look up and shoot down. Deontay has different jabs, too. I’ve seen them over the years. Got a great up-jab, as good as the one Bob Foster used against Mike Quarry” — June 1972, if you’re wondering — “he’s just got to use it.”

Again, same for the body work. “God blessed Fury with a lot of body for us to beat up,” Scott says. “We’ve got to hit him there with bad intentions. Deontay has never gone to the body so much in a training camp. We’ve had entire sparring sessions where he did nothing but go to the body.”

Left unchecked, a champion’s ego will eventually devour the champion himself. Hence, the great ones need to get their asses kicked. For Fury, it was a suicidal depression. For Foreman, it was the humiliation brought on by Muhammad Ali in Zaire. You can deceive the world — again, it’s part of the job — but not yourself. That kind of knowledge comes only with the highest price, a savage beating being just the down payment.

“The loss was needed,” Scott says. “Deontay humbled himself, but kept the ego. In my opinion, it was the best thing that could have happened to him.”

There’s something animated about Malik Scott, an unmistakable delight. He has found what he’s supposed to be doing.

Question is, has his champion?