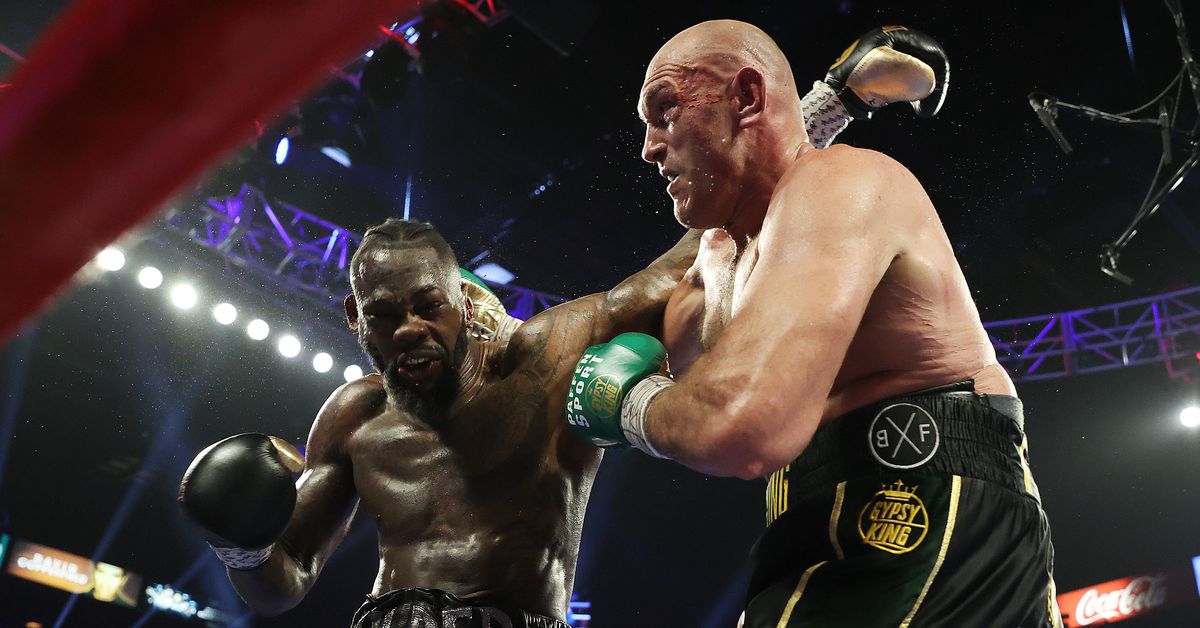 Tyson Fury and Deontay Wilder are ready to go on Saturday night as the two meet for a third time in Las Vegas, so while we’ve got just over a full day to go before what both believe will be their final meeting, let’s take a look back on their first two bouts.

The first bout between Wilder and Fury came as a bit of a surprise at the time, as Fury had just gotten himself back into the sport after a prolonged absence, having fought just two times after his 2015 win over Wladimir Klitschko.

Fury’s victories against the over-matched Sefer Seferi and Francesco Pianeta in June and August saw him mostly looking to work himself back into proper fighting shape, having frankly — and by his own admission — let his conditioning fall to pieces over a two-and-a-half year period.

Wilder had negotiated for a fight with Anthony Joshua, which was what everyone wanted. But when that fell apart for whatever reason you want to believe, it was Fury who got the call to face Deontay.

What we wound up getting was full confirmation that Fury was still a hell of a great and uniquely tricky boxer, even not operating at his very best, as he exposed Wilder’s limitations for much of the fight — but we also got full confirmation that Deontay Wilder’s punching power is beyond legit, as he decked Fury in the ninth and 12th rounds, one of them becoming an instant classic moment as Fury, seemingly knocked clean out, rose from the canvas like the Undertaker.

The scoring was hugely controversial, as one card came back 113-113, one was 114-112 for Fury, and the third was a puzzling 115-111 for Wilder, which nobody agreed with, and in fact most observers felt Fury deserved the win despite the two knockdowns, as boxing is scored round-by-round and Fury simply was the better man for the vast majority of the fight.

It’s also hard to remember this now, but after the fight, Wilder and Fury displayed a ton of respect for one another.

“We poured our hearts out tonight. We both are warriors,” Wilder told Showtime’s Jim Gray.

After Fury passed on a WBC-ordered rematch with Wilder in order to sign with Top Rank and hopefully up his American profile via ESPN exposure, the two finally did get together for the long-awaited rematch in early 2020.

This time around, it was not even close. Fury had promised to come out and batter Wilder, which he did pretty much from the opening bell, staying on the front foot and physically dominating the defending WBC titlist.

With even his legitimate puncher’s chance seemingly gone, and taking a pretty large amount of punishment, Wilder’s corner — specifically, Mark Breland — decided to throw the towel in the seventh round.

Wilder, of course, was furious, and has since gone on a series of bizarre rants accusing people of tampering with his water, Fury loading his gloves, Breland being against him, his entrance costume being so heavy it affected his legs, and various other nonsense.

This fight also had to go through mediation to get done. Wilder did immediately exercise his rematch clause in 2020, but when the pandemic hit, it put a lot of big fights on ice, including Fury-Wilder 3. Eventually, Fury supposedly had a deal to fight Anthony Joshua basically in place, but a mediator sided with Wilder, and we’re getting this third fight.

Will Deontay Wilder get his revenge on Saturday, or will we see more of what we saw in the rematch from Tyson Fury?

AWKWARD! Artur Beterbiev BITES BACK at question ‘YOU WANT TO BE ANGRY WITH US?!’ | #shorts
The Beltline: Tunde Ajayi, a white towel, and one of the finest corner stoppages in recent memory
Bohachuk vs Gallimore: Live updates and results NOW!
Why we might have to wait until 2024 to see Artur Beterbiev vs. Dmitry Bivol in a must-see matchup
Gervonta Davis-Ryan Garcia: Raiders’ Allegiant Stadium A Possible Site For April 15