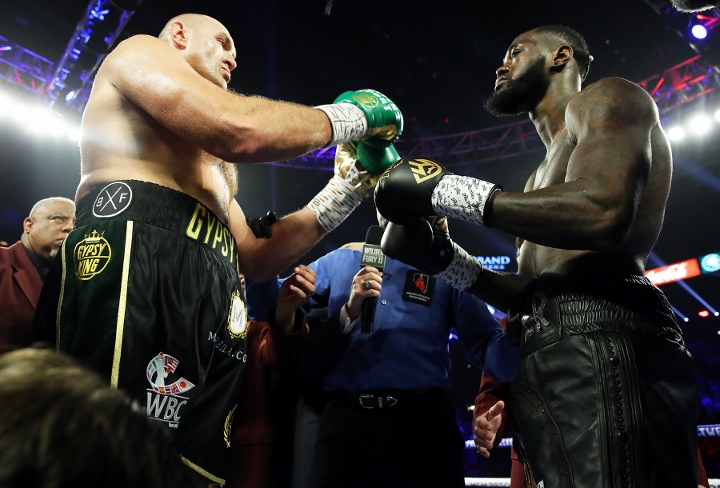 Their promoters were fearful of an altercation after they weighed in on a stage at MGM Grand Garden Arena. They instead posed for photos separately, insulted each other from afar and saved most of their pent-up aggression for Saturday night at T-Mobile Arena, where these heavyweight rivals will fight for the third time in an ESPN/FOX Sports Pay-Per-View main event.

Minutes earlier, the 6-feet-9 Fury weighed in at a career-high 277 pounds, four more than the defending WBC champion came in for their rematch. Fury’s trainer, Javan “Sugar Hill” Steward, indicated recently that Fury would weigh as much as 20 pounds more than 273 pounds for this third bout.

Fury’s previous career-high was 276 pounds for his stoppage of Sefer Seferi in June 2018 at Manchester Arena in Fury’s hometown of Manchester, England. His easy victory over Seferi marked Fury’s return from a 2½-year layoff.

The 6-feet-7 Wilder, meanwhile, stepped on the Nevada State Athletic Commission’s scale at a career-high 238 pounds. Wilder weighed seven pounds more than the 231 he was the day before he lost to Fury by seventh-round technical knockout in February 2020 at MGM Grand Garden Arena.

The 33-year-old Fury (30-0-1, 21 KOs) dropped Wilder twice, once in the third round and again in the fifth round, during their one-sided rematch 19 months ago. He was contractually obligated to their third fight, despite a failed attempt by his co-promoters, Bob Arum’s Top Rank Inc. and Frank Warren’s Queensberry Promotions, to make a more lucrative heavyweight championship unification fight against British superstar Anthony Joshua.

The 35-year-old Wilder (42-1-1, 41 KOs) floored Fury twice during their first fight, once apiece in the ninth and 12th rounds. A determined Fury got up from each of those knockdowns and fought Fury to a 12-round split draw in December 2018 at Staples Center in Los Angeles.

Official weights for the Fury-Wilder undercard bouts are listed below.