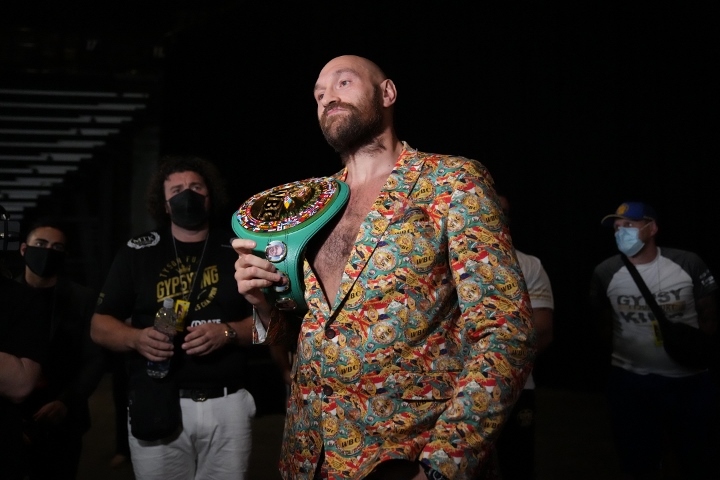 In an interview with Gareth A. Davies, Tyson Fury has told William Hill that he believes Deontay Wilder is still his most dangerous opponent in the heavyweight division due to his “single-punch power” ahead of their trilogy fight in Las Vegas on Saturday night.

Fury and Wilder will meet in the ring for the third time this weekend as the Gypsy King defends his WBC world heavyweight title, having seen off his rival last time out after the first bout ended as a draw.

Despite his defeat of Wilder in their second bout, Fury still believes that the Bronze Bomber’s punching ability ensures he remains a danger.

“Wilder can close that distance quick,” Fury told William Hill. “Well, he used to be able to, I don’t know what he’s like now after his loss, but he can close the distance quick and he can get a man out there with either hand. So, you’ve got to be very careful with Deontay Wilder. He still poses the most imminent threat to me of all the heavyweights in the division, for sure. He’s the only one with that single-punch power.”

Fury added: “I’m going to be a bear and go out there and act like a bear. I’m a grizzly bear. I’m in the Nevada desert and I’ll be a grizzly bear on Saturday night. Grizzly bears are aggressive, and they attack. You can’t get out of the way of them, you can’t run 30 miles an hour. They’ll get you and disfigure you and dismantle you, and that’s exactly what I’m going to do to Deontay Wilder on Saturday night.”

Should Fury overcome Wilder this weekend, there had been hope it would lead to an undisputed title fight with Anthony Joshua, before his recent defeat to Oleksandr Usyk.

Fury cannot now see a fight with Joshua happening any time soon, while he admits he was disheartened to see his rival lose to Usyk.

“When you’ve got this rival, and everyone talks about you and him fighting each other one day, and all of a sudden, this rival falls down, it’s almost like you want to pick him back up again and put him back on his pedestal so that the fight with you can still continue,” Fury said. “I wanted it to be me that knocked him off again, but unfortunately the Ukrainian master got there before me so there’s not much I can do about that.

“It was a terrible shame what happed to Joshua, it just killed the fight with me and him. But everyone has their own cross to bear in life and their own adherence to it, to maintain it. And that’s just another one for AJ to deal with.”

For Joshua to beat Usyk in their rematch, Fury added: “In my view he needs to watch the Steve Cunningham fight with me and adapt those tactics to beat Usyk. You’ve got to keep moving forward and keep swinging hard punches, train for it and execute your gameplan on the night.”

There has been plenty of speculation as to how much longer Fury will decide to continue his career for, but the Gypsy King says he has no plans to hang up his gloves.

He said: “’How long is a piece of string?’ is the answer to that question. I am 33 and I think I’ve got a lot more to offer in the game, but you never can tell. When it’s over, it’s over and I’ll know that, but until that day I’ll just keep at it, keep moving forward strong. I’m not fighting for any certain goal anymore. I don’t have any goals in boxing anymore, there’s nothing that motivates me to want to stay on forever. It’s nice while I’m doing it, but I don’t know what I’m going to do after boxing’s finished which is why I’m still boxing now.”

Meanwhile, boxing promoter Eddie Hearn has said he believes Fury could be on the wrong end of a defeat on Saturday night as he’s not at his peak condition for the fight.

“Normally, I would say it’s a stroll in the park for Tyson Fury,” Hearn said. “But I reckon he’s probably only at 60% or 70% so… I still think he wins, but Wilder has the power to end it at any time. Normally, Tyson shouldn’t lose a round, and I don’t think he will lose a round, but he could get taken out, because I don’t think he’s really prepared in the right way for this fight.”