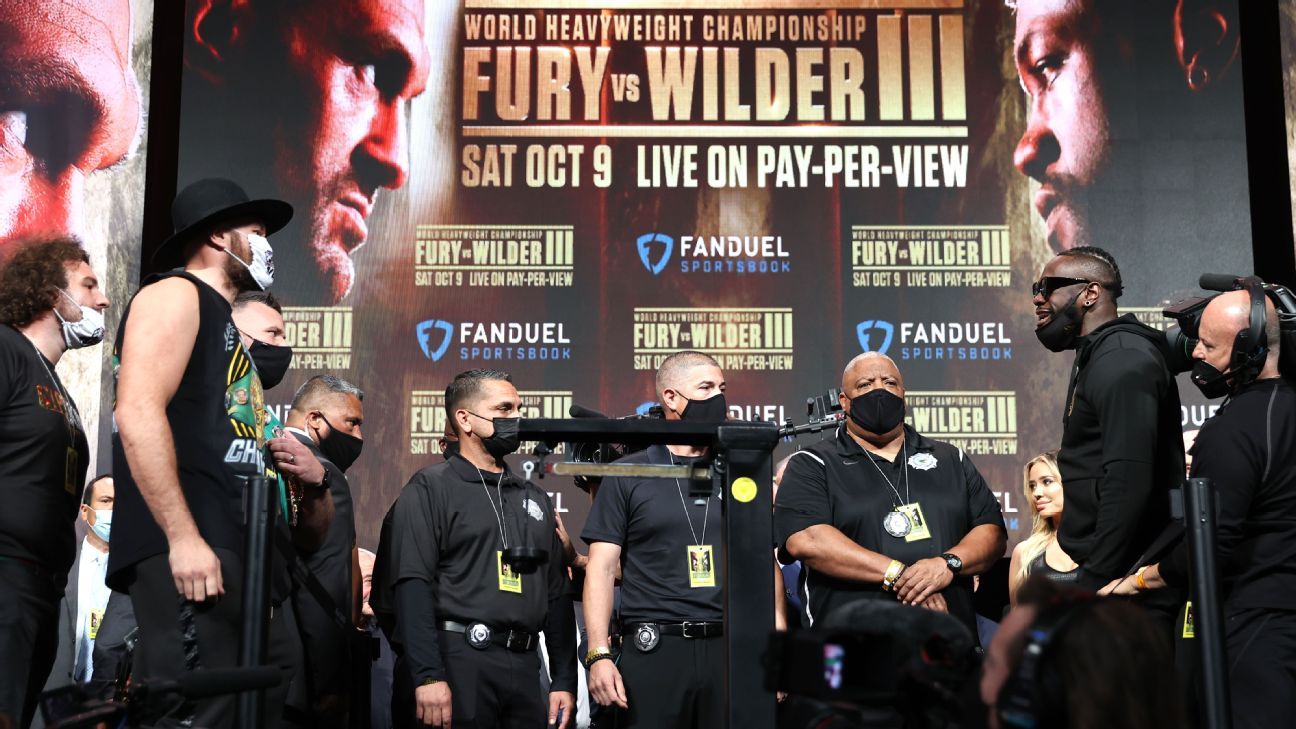 LAS VEGAS — Tyson Fury and Deontay Wilder both tipped the scales at the heaviest of their careers on Friday, one day before they’ll meet in a heavyweight championship trilogy fight (9 p.m. ET, ESPN+ PPV).

Fury weighed 277 pounds, four more pounds than he weighed in his February 2020 rematch with Wilder. The challenger weighed 238 pounds after coming in at a then-career-high of 231 pounds in his seventh-round TKO loss to Fury.

Wilder, who was shirtless, clearly packed on plenty of muscle yet was chiseled. During training camp he posted several videos on social media of him bench-pressing, wildly celebrating as he broke his personal bests.

“I’m bench pressing a little over 350 [pounds] so … it won’t be none of that rushing me and putting his weight on me and different things like that,” said Wilder, 35. “… I wanted to look sexy and feel sexy.”

Fury sported a T-shirt, mask and black hat as an homage to WWE superstar “The Undertaker.” Fury, like the wrestler’s character, seemingly rose from dead when he got up off the canvas in the 12th round of his first meeting with Wilder to salvage a split draw.

The Undertaker sent support to Tyson Fury ahead of #FuryWilder3 🪦 pic.twitter.com/2tSYDcJPxC

During that controversial 2018 bout, Fury seemed to win most of the rounds besides the ones in which Wilder scored knockdowns (the ninth and 12th). In that fight, Wilder weighed 212.5 pounds while Fury weighed 256.5 pounds and boxed off the back foot.

In the rematch, Fury drastically changed his strategy and elected to apply nonstop pressure. He rolled forward and bullied Wilder (who is two inches shorter at 6-foot-7). Neither boxer has competed since February 2020.

“He was complaining last time he had a cracked skull and injured arm. I can’t wait for Saturday night; I’m going to really severely damage him,” said Fury, 33. “He’ll be unrecognizable after the fight. His little pretty wife down there [Fury pointed to her] won’t recognize him; don’t worry about that. I’ll send him home butchered.”

Additional weights for bouts on the PPV undercard: