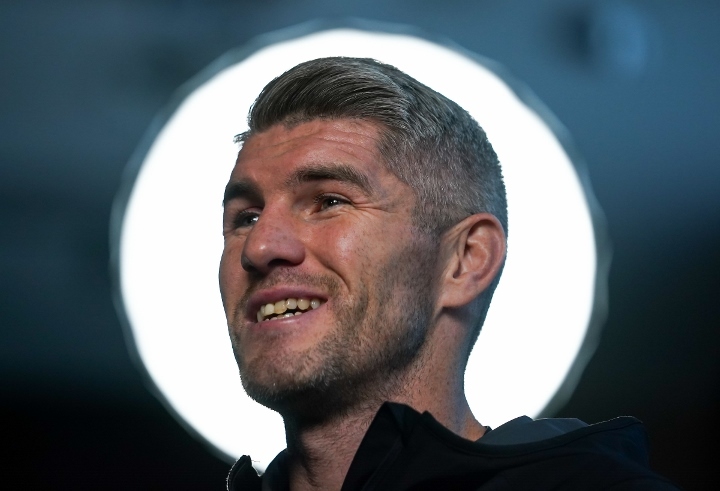 Liam Smith showed he is far from past it as he battered Anthony Fowler to defeat in the eighth round of their Merseyside derby at the M&S Bank Arena, Liverpool.

Smith, 33, the former WBO super-welterweight champion, looked just a class above Fowler. Smith was cut in the first round, but did not panic and just broke Fowler down, dropping him twice in a dominant display that puts him back in line for another world-title shot.

“I lose tonight and I am finished, I want to challenge foe a world title again and if I lost to Anthony Fowler I would have no chance,” Smith said. “It’s a bit hard when people say ‘it’s an easy win’, I knew it wasn’t.

“Hopefully now we can make that Jessie Vargas fight that has been mentioned a few times.”

Fowler made a great start, landing a right that cut Smith around the left eye and then tagging Smith with a right that made the former WBO champion smile in appreciation. But Smith came back well in the second round, closing the gap between then and forcing Fowler backwards.

But Fowler, 30, came back well again in the third round, as he seemed to hurt Smith with two big rights then forced Smith into his shell, although Smith came back with two rights of his own just before the bell.

Again, Smith came back in the fourth round, as he landed a right and followed it up with a combination that left Fowler cut over his left eye. In the fifth, Smith’s jab was always landing and when he threw his right, that seemed to get through to, as Fowler started to look ragged.

Midway through the round, Fowler came forward swinging but was nailed by a big right that dropped him to the seat of his shorts. Fowler looked badly hurt and Smith bided his time, but kept the pressure on, rocking Fowler again with right and left hooks, although Fowler survived the round on unsteady legs.

He did well in the sixth round as he got through with no serious worries and even landed a good left hook, but was under pressure for much of the seventh as Smith kept him moving backwards.

Fowler was trying to land big hooks around Smith’s guard, but Smith was dominant inside. In the eighth round he stepped on the pace again and Fowler was looking tired. In the centre of the ring, Smith landed a big right, then followed it up with a left to the body, which opened the way to a left to the side of the head that dropped Fowler on his back. He just about beat the count but referee Howard Foster waved it off at 2:04 of the round.

“It was a great fight, I always knew it would be competitive, certainly for the first six,” Smith said. “I started very slow, but for start to finish we did a very good job. I said all along that I have been in with bigger punchers and I have a good enough chin at this level.

“I thought it was over (in the fifth round), he did well getting up and I let him off the hook a bit in the next round. But I said ‘it was my type of fight now’ and it went the way I always thought it would go.”

Fowler admitted that he had not been ready for a fighter of Smith’s level.

“I will do eventually but you can’t jump before you can walk,” Fowler said. “You can’t rush into it. If I had had a Cheeseman fight, a Sergio Garcia, then, who knows, it might have been a bit more competitive. I’m not a fool, but I’ve got a lot of heart and will never turn down a fight.”