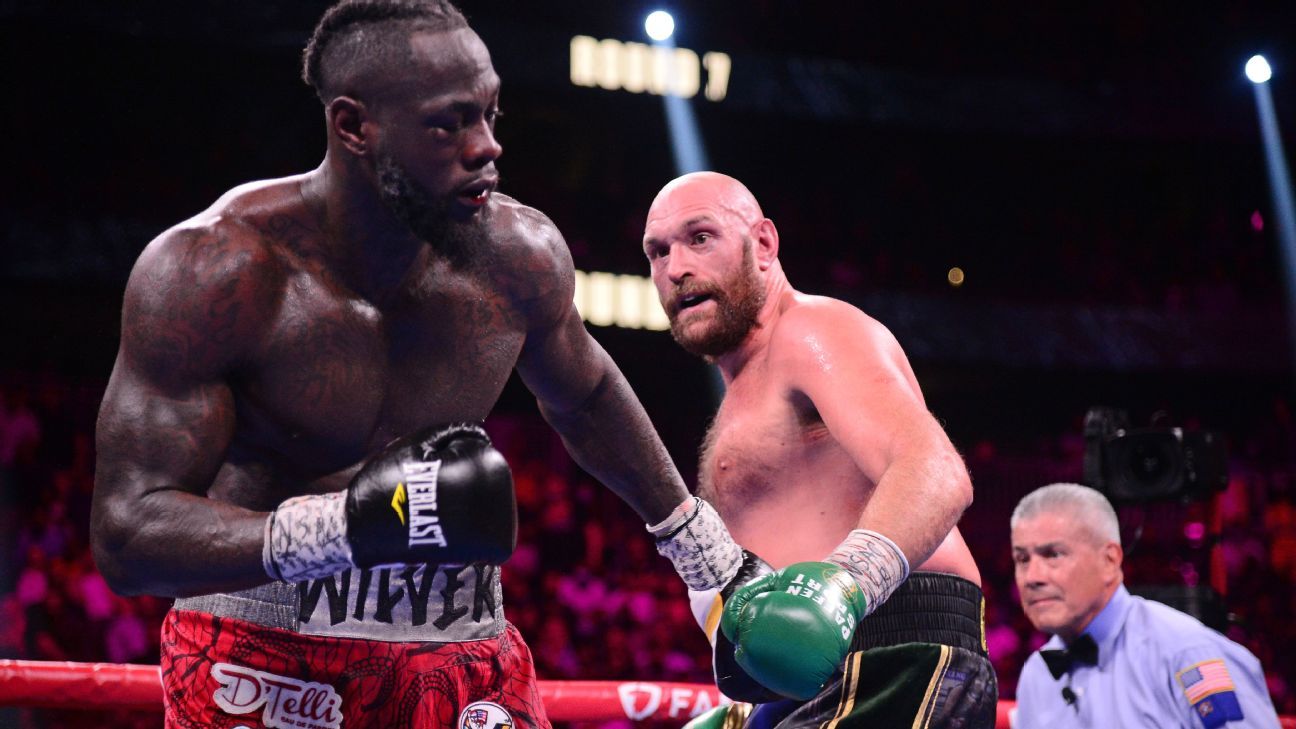 Tyson Fury stopped Deontay Wilder in the 11th round of their trilogy fight to retain his WBC and lineal heavyweight titles. Brett Okamoto, Ben Baby and Michael Rothstein react to the night filled with impressive heavyweight performances and a prospect who learned a valuable lesson.

Immediately after the second chapter of the Tyson Fury-Deontay Wilder trilogy, I remember asking Andre Ward about Wilder’s contractual right to a third fight — namely, should he exercise it? Yes, he had the right to a third fight, but was it even the best thing for him? And Ward responded, very honestly, that Wilder should not. After the kind of mental and physical beating Wilder took that night, he should probably let the third fight go.

Ward went so far as to say Wilder would be “shattered” psychologically from the second bout.

And you know what? For the last 19 months, it kind of looked like Ward was right. Think of all the excuses that came out of Wilder. The weight of the costume. Fury’s gloves. His decision to fire trainer Mark Breland for throwing in the towel during the second fight, and his subsequent hiring of close friend Malik Scott, who had never ran a professional corner before.

And then when the fight started, and Fury knocked Wilder down in the third round, there was definitely this feeling of … Wow. Wilder is done. And boxing waited all this time — and lost a Fury vs. Anthony Joshua unification bout — just to finish a trilogy that was already finished.

Then the fourth round happened. Despite looking lethargic and darn near out on his feet, Wilder dropped Fury twice, which set the tone for the most entertaining fight so far in 2021. He lost nearly every round besides the first and the fourth, but he surprised Fury with the right hand multiple times throughout and was afforded the opportunity he said was robbed of him in 2019 — the right to go out on his shield. Ten, 20 years from now, it will be interesting if Wilder regrets the punches he took in the last two fights, but for now, he wanted the right to go out in the manner he wanted, and the boxing world received a hell of a fight for it.

So, what’s next for Wilder? There’s a temptation here, immediately after the fight, to echo what Ward said two years ago. It’s tempting to say he’s done. That as good as Saturday’s fight was, and as genuine as Fury’s comments on him being the second-best heavyweight in the world right now were, it’s easy to question Wilder’s ability to come back from this. He just absorbed a terrible amount of damage in back-to-back fights, and it’s been proven, many times now, that an opponent can survive his devastating missile of a right hand.

But Wilder has earned the benefit of the doubt with the heart he showed on Saturday. The fact he was able to still stand from the sixth round on was nothing short of remarkable. If it’s possible to pair him against the loser of an expected rematch between Oleksandr Usyk and Anthony Joshua — that’s a sellable fight that would make sense.

Going into Saturday, there was no guarantee the final chapter of this trilogy would prove to be a good thing. Wilder made sure it was. — Okamoto

Rothstein: Earlier this fall, in a conversation about what it was like to fight Tyson Fury, his sparring partner, Jared Anderson, said he could see himself fighting Fury one day. That’s a ways off — years off, potentially — but if anyone on the undercard took massive steps in the right direction Saturday, it is the 21-year-old they call “Big Baby.”

Fighting Vladimir Tereshkin was a fair challenge for Anderson, who has knocked out all 10 opponents he had faced. Tereshkin had been undefeated, but hadn’t fought in almost two years, and it showed. Anderson and his skill exploited that advantage. He hurt Tereshkin in the first round and completely broke him down by the middle of the second round, at which point the referee stopped the fight.

Anderson had confidence going in and he should have more now. He did what he was supposed to, which is more than some of the other fighters on the undercard, and in less time than people expected.

“My confidence level is through the roof. In the next three fights I think I can work through and then get to him. That could happen,” Anderson told ESPN recently. “I know it’s not practical, building, how they want to build my age and everything else, but I know the type of fighter that I am and being in there with the current world champion and getting the praise that I have, let me know that I’m ready.

“It’s just going to take the stepping stones that all the champions do. But I definitely could see it.”

Stepping stone No. 1 took place Saturday on the undercard of Fury-Wilder III. Fighting Fury is not a realistic option. Nor is it for Frank Sanchez, who had a strong performance in a win over previously-undefeated Efe Ajagba on Saturday night, too.

Putting Anderson on this undercard put him in the same conversation of promising young heavyweights on the rise — albeit as a younger option. It gave him an audience to help build his profile.

Anderson gets it. He knows it’s a process. But the way Anderson, in the way he fought on Saturday night, looks like the potential long-term future of the heavyweight division.

Is Robert Helenius a contender?

Baby: Robert Helenius was so good on Saturday night that his opponent Adam Kownacki was looking for any way he could end the night early. So, Kownacki resorted to a series of low blows that forced referee Celestino Ruiz to end the rematch, at first stating in the ring it was a disqualification. The fight was ultimately ruled a TKO victory for Helenius, which raised a key question: Is Helenius a legit heavyweight contender?

The answer is a quick and fairly definitive “no.”

Sure, Helenius (31-3, 19 KOs) looked good against Kownacki, who could not handle Helenius’ reach and power and absolute confidence that he wasn’t going to lose. Kownacki had none of that.

However, Helenius is a 37-year-old who doesn’t have a real quality performance on his ledger. He was knocked out by journeyman Gerald Washington in July 2019 (who, by the way, Kownacki beat Washington via second-round TKO sixth months earlier). Helenius also lost a lopsided decision to Dillian Whyte in 2017.

All of this isn’t to say Helenius isn’t watchable, because he certainly is. But Saturday’s performance might have been the product of a good matchup as much as anything. It’s hard to imagine that at his age and at this point in his career, Helenius is capable of better outings against truly elite competition.

A win is not just a win for Edgar Berlanga

Rothstein: Edgar Berlanga may have won his 168-pound fight against Marcelo Esteban Coceres on Saturday night, with all three judges scoring the fight 96-93. But he lost the thing that made him one of the most intriguing fighters: His veneer of invincibility.

While this could be a benefit for Berlanga in the long-term course of his career, through the shorter prism of this one fight, there are reasons to wonder about Berlanga. At the very least, maybe the Berlanga express to a potential title fight needs to take a breather for a moment. Against Coceres, he was truly tested for the first time. The days of the 16 straight first round knockouts to start his career feels like a lifetime ago instead of only a year ago.

Only one man was knocked down Saturday — and for the first time in his career, it was Berlanga.

Don’t get me wrong. This wasn’t a complete disaster for Berlanga. The benefit for Berlanga (18-0, 16 KO), who is still a potential future star despite what must seem like a let down in a showcase fight, is that he’s only 24 years old — very young in his career — and he can learn a ton from this fight.

Perhaps this fight shakes Berlanga enough to realize that when he continues to take steps up in competition — because that will happen soon — he needs to be much sharper than he was Saturday. A fighter with more power might have knocked Berlanga out with the holes he was leaving open for Coceres to connect.

Coceres (30-3-1, 16 KO) was a difficult target for Berlanga, constantly moving and looking faster than Berlanga at many points during the fight. Berlanga showed patience and a chin — things we didn’t previously truly know because of a lack of rounds in 16 of his 17 prior fights.

Berlanga has things he needs to work on, and now he has a difficult fight on tape to study and process. That’s what fights like Saturday are supposed to do — maybe without the knockdown, and some of the damage taken — but it provided Berlanga with his first real challenge. The first of many to come.