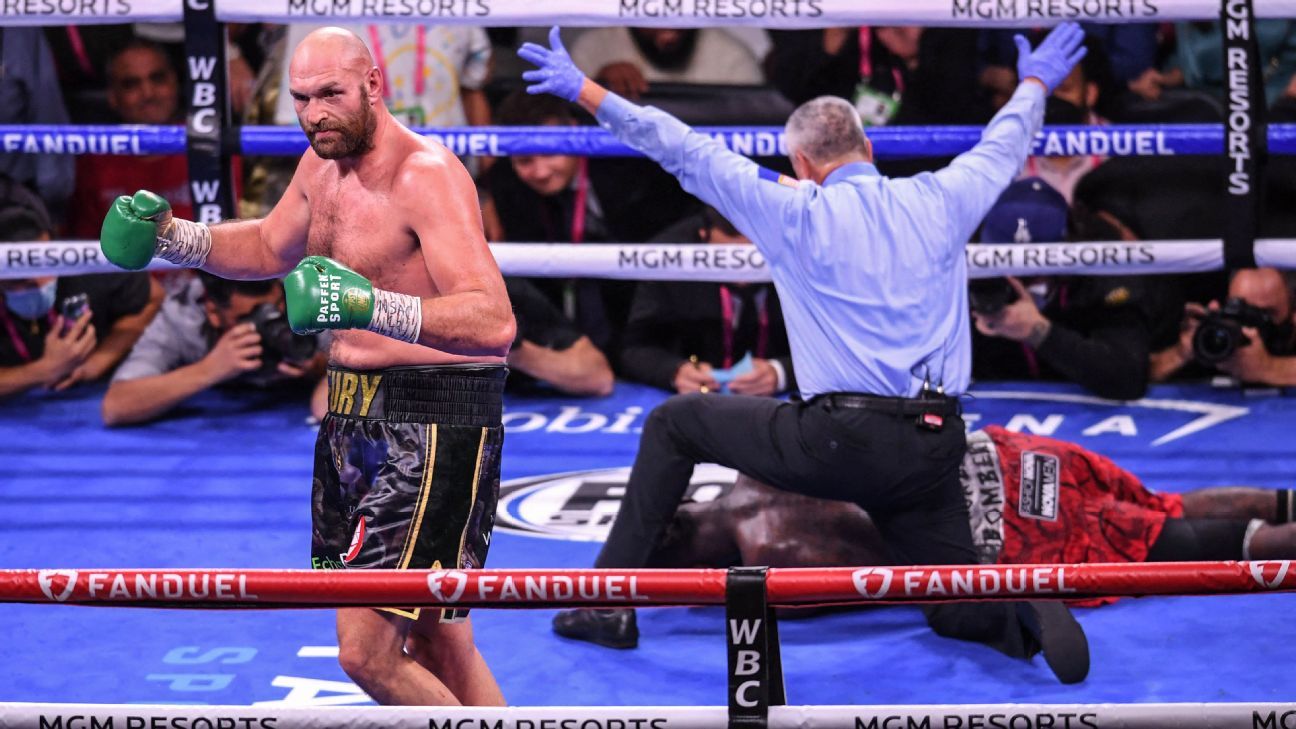 LAS VEGAS – As the evening began, Deontay Wilder looked as if he stepped out of a comic book. The shoulders, the arms, the fearsome arch of his torso — it all suggested a character on loan from the Marvel universe.

Turned out, he was even more than that. He was flesh and blood and a vastly improved fighter, much of it owing to his new trainer, Malik Scott. He began by jabbing to Tyson Fury’s fleshy body. He remained violent in the clinches. And he knocked down the champion twice in the fourth.

As a rule, nobody gets up after Wilder knocks him down. But Fury — the exception to all rules — has now made a career of it. If Wilder demonstrated all the heart he had promised, it still wasn’t enough to beat Fury.

By the tenth round, Wilder seemed a super hero no more. There he was, sitting on the stool, waiting for the bell, gruesomely ennobled, having shown a heart no animator could imagine. His features swollen, his mouth bloodied, his eyes closed — the sight of him recalled what Muhammad Ali had said of his third fight with Joe Frazier in Manila. This was the closest you could come to death without actually dying.

It’s not a gratuitous comparison, but one that was earned — in blood, sweat and anguish. Fury-Wilder will be remembered as more than the great trilogy of a still-young century. It was anomalous in all ways. The nature of a these things is for the third fight to break the tie. That wasn’t the case here, though. While the first fight went into the books as a draw, it resurrected Fury — then a huge underdog — as a star. The second was all Fury, of course. Then, as Wilder finally toppled forward for the last time in the 11th round, one can argue that Fury-Wilder ended in a clean sweep.

What’s more, it was improbably thrilling every step of the way. “As worthy as any trilogy in the history of the sport,” Fury said.

Here were three fights that broke every rule, every convention. Fury and Wilder will be remembered forever in tandem. They didn’t change the arc of each other’s careers; they changed each other’s lives. It was a blood feud. Even at the end.

“I wanted to show some love and respect,” Fury said. “But he didn’t show it back. That’s his problem. I’ll pray for him so God will soften his heart.”

This is not a good time for boxing. There are fighters who talk and post more than they fight. There are influencers posing as fighters. There is a plague of fugazy titles and promotions that can’t work together. But for a night at least, this was an antidote for all of it. This was better than comic books. What happened on Saturday at T-Mobile exceeded even the Hollywood conception of a fight. Turns out the sport is still capable of producing profane majesty.

I was there for Riddick Bowe-Evander Holyfield. This was better.

Wilder came out with those jabs and right hands to the body. Then he began to unload.

Fury put him down in the third. Wilder got up.

Then Wilder put Fury down in the fourth. Fury got up. Twice.

‘I did my best, but it wasn’t good enough,’ Wilder said. “I’m not sure what happened. I know that [Fury] didn’t come in at 277 pounds to be a ballet dancer. He came to lean on me, try to rough me up and he succeeded.”

Fury landed 150 punches, more than twice as many as Wilder. Again, Fury is his own best prognosticator. The numbers recalled what he told me earlier in the week: “Does it go the distance? No chance. I’ll stop him again. I’ll smash him. I’ll submit him this time. Like an MMA fighter, I’ll make him quit. I’ll punish him severely. I’m going to really, really damage him.”

Of the right to the temple that sent Wilder toppling forward 70 seconds into the 11th round, Fury said: “I haven’t seen it, but I felt it. Those shots ends careers.”

By then Wilder had been taken to University Medical Center. But he had not submitted. He never quit.

The referee Russell Mora did his job properly. Still, if Wilder had come to show his heart, if he wants to be well remembered, then this qualifies as a kind of victory.

But it came at a terrible price.