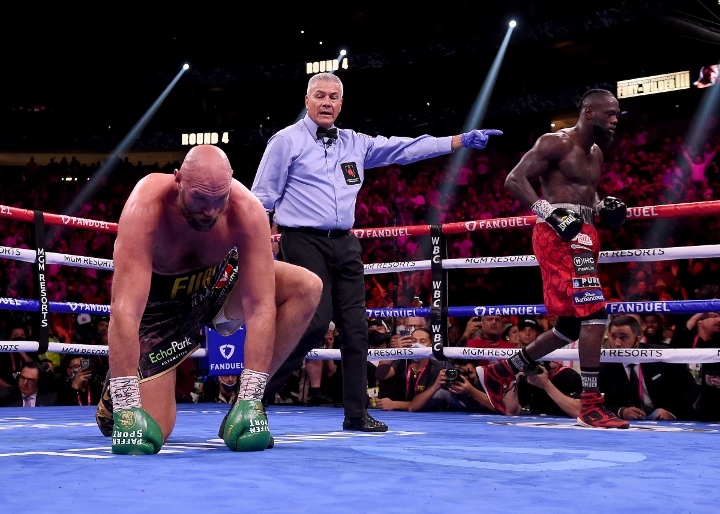 Eddie Hearn, promoter for former heavyweight champion Anthony Joshua, was very surprised that Deontay Wilder looked so tired after a few rounds had passed in the trilogy fight with Tyson Fury.

This past Saturday night at the T-Mobile Arena in Las Vegas, Fury retained the WBC heavyweight title when he knocked Wilder out in the eleventh round of their contest.

Fury dropped Wilder in the third round. Wilder retained fire in the fourth, when he dropped Fury twice. Fury would drop Wilder again in the tenth and then again in the eleventh for the knockout.

“Wilder could not stand up, he was exhausted after three rounds, and that’s not normal. Some heavyweights have good tanks. Fury’s tank is exceptional, but you can’t just say, ‘That’s how he is.’ You can’t have a championship fight at any kind of pace if you can’t stand up after three rounds,” Hearn told IFL TV.

Agreeing with the opinion of others, Hearn was very entertained with the drama of the contest.

“Technically it was all over the shop, but who cares? The drama was unbelievable. Massive credit to both fighters. Wilder looked hypnotized before the fight and after two rounds he almost couldn’t stand up. He started quite well, but he looked petrified and exhausted before the fight even started,” Hearn said.

“After three rounds [Wilder] couldn’t stand up and I thought it was all over. He comes back with the equalizer and Fury goes down twice. It was non-stop and full of drama. I have to give Fury credit, because he dug deep and got the win. It was brilliant for boxing and for the heavyweight division, because we need fights like that. I wanted Fury to win. Props to both guys and massive congratulations for Fury, because it was a great win.”

Why we might have to wait until 2024 to see Artur Beterbiev vs. Dmitry Bivol in a must-see matchup
Highlights and results: Bazinyan beats Fox, Gollaz Valenzuela smashes Ulysse
Driving for perfection: The thousands of miles that shaped Alycia Baumgardner into a world champion
Bunce Diary: If you want a boxing tag team, look no further than Alexander, Samuels, Brodie and Swain
Showtime will be absorbed into Paramount+, so what could that mean for boxing?