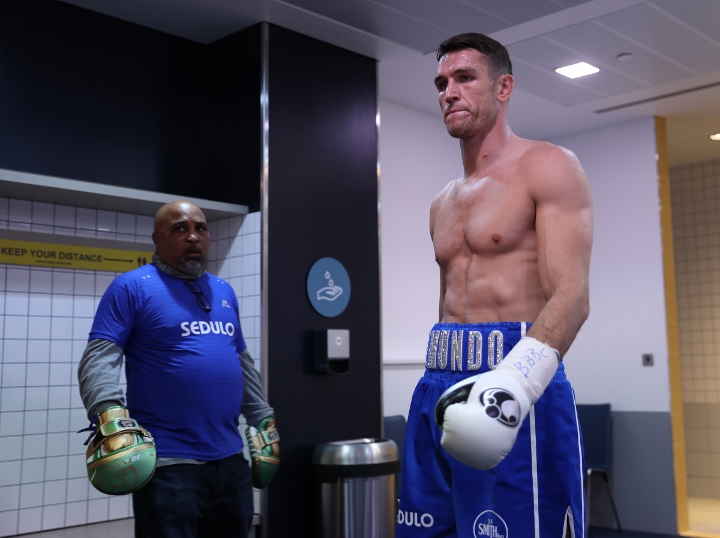 Trainer Buddy McGirt could not be more pleased with the development of Callum Smith, the latest fighter to walk through his Southern California gym.

Smith, a former 168-pound champion from Liverpool, England, made his 175-pound debut under McGirt on the Sept. 25 Anthony Joshua-Oleksandr Usyk undercard at the Tottenham Hotspur Stadium in London a successful one, blowing out the usually durable Lenin Castillo in two rounds.

Smith linked up with McGirt a few months after losing widely to Canelo Alvarez on points in their 168-pound unification bout last December at the Alamodome in San Antonio. Smith was previously under the tutelage of Joe Gallagher, who has, in fact, trained all of Smith’s brothers as well, but Smith, in a surprising move, decided it was time for a change.

So far Smith is off to a promising start with McGirt.

“Yes, very much so, especially being our first fight together,” McGirt said on The PBC Podcast, when asked if he was happy with Smith’s latest performance. “I was very impressed. He was coming along in the gym. At first, he had to get adapted. We both had to get adapted to each other, to be honest. After the third week everything started flowing.”

“I have a future world champion,” McGirt said. “He does things that other fights don’t do today: He listens.”

Surprisingly, McGirt said he did not watch Smith’s last fight, an admittedly lackluster performance against Alvarez.

“I didn’t watch it [fight against Alvarez],” McGirt said. “I’m not going to look at that fight. I’m going to look at what I have in front of me now, because God only knows what he did to get ready for that fight. how he was feeling that night. I’m not even going to sit and watch that because it might — I believe if you do that, something negative could be in your mind. You know what I mean? He might not be the same guy, so I want to see what I have right now. I don’t want to see what happened then.”

McGirt says Smith is all primed now to challenge for a 175-pound world title, no matter who that might be against.

“I don’t get into that targeting [of opponents] part, but I know for a fact that he’s ready right now [to contend for a world title at 175],” McGirt said.

The Beltline: Just as boxers must do better, we must know not to expect perfection
De La Hoya Optimistic that Tank-Garcia Will Lead to More Collaboration With PBC
Barrios-Santiago, Pero-Faust set for Vargas vs Foster undercard
Panel: How much interest do you have in seeing a rematch between Liam Smith and Chris Eubank Jnr?
Sources: Taylor tears plantar fascia; title bout off