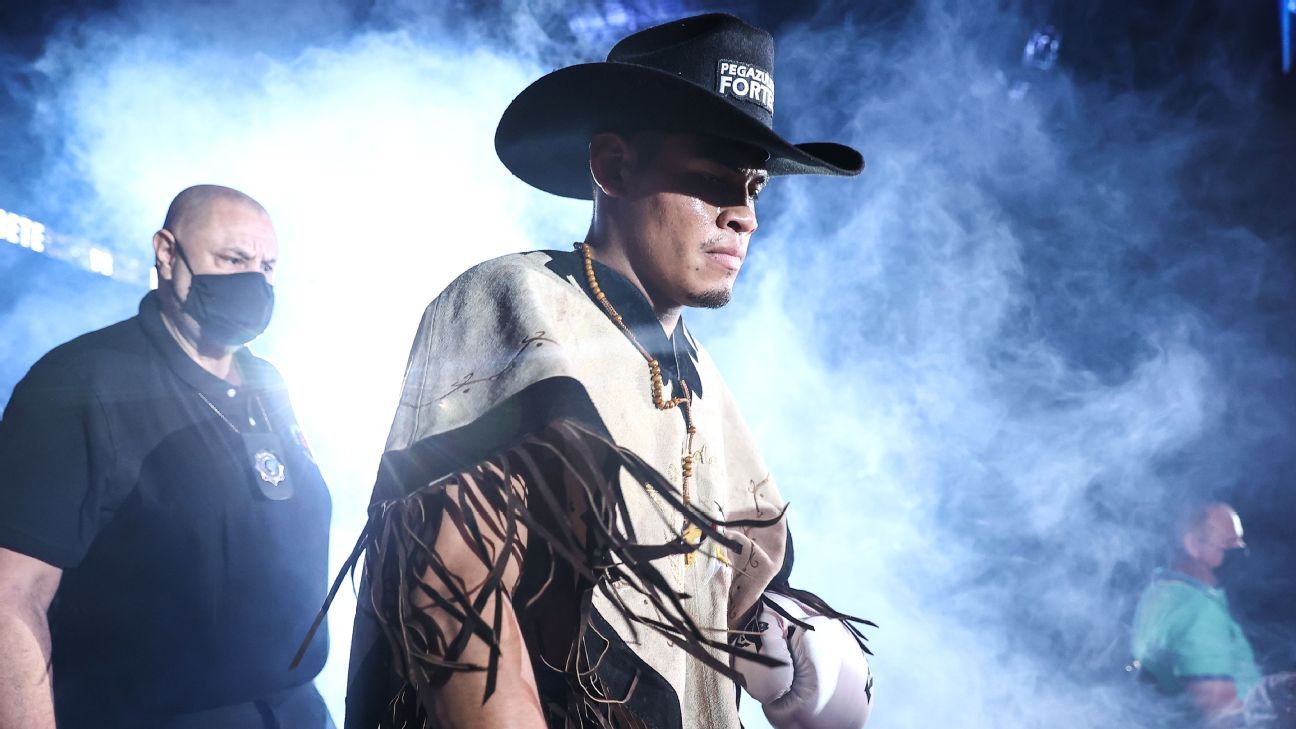 As the boxing world moves on from Tyson Fury’s incredible victory over Deontay Wilder, this weekend offers a number of solid fights which include the return of some of the sport’s bigger names.

Navarrete (34-1, 29 KOs) won a junior featherweight world title against Isaac Dogboe in 2018 and made five defenses before moving up to the 126-pound division. He won the then vacant featherweight title against Ruben Villa a year ago, and defended it with a 12th-round TKO victory over Christopher Diaz in April.

So, how big of a challenge is Gonzalez to a Navarrete, who hasn’t lost a fight in more than nine years?

On Saturday, super middleweight prospect Diego Pacheco returns to the ring for his third fight of 2021 to face Lucas de Abreu, an unbeaten orthodox fighter from Brazil. Abreu has 11 KOs in 12 fights, but the focus is on the 20-year-old Pacheco against this pressure fighter.

Also on Saturday, former four-division champion Mikey Garcia will fight for the first time in almost 18 months, a 10-round welterweight battle against Sandro Martin.

Garcia (40-1, 30 KOs), has only fought twice since his March 2019 decision loss to Errol Spence Jr.. He also has a decision victory over Jessie Vargas in February 2020. Martin (38-2, 13 KOs), is making his first appearance in the United States after fighting most of his career in his native country of Spain.

Our panel of Timothy Bradley Jr., Mike Coppinger, Mike Rothstein and Ben Baby look at these fights and some other must-see bouts this weekend.

Coppinger: Navarrete is a talented fighter, a boxer who generates tremendous leverage on his punches with exceptional height for a 126-pounder at 5-foot-7.

The 26-year-old throws shots from awkward angles and with bad intentions, too. Most of all, perhaps, Navarrete unloads with incredible volume even after moving up from 122 pounds. In his featherweight debut — a title fight — he threw nearly 700 punches. His first defense was a successful one, a knockout of Christopher Diaz. He threw 744 punches in that bout.

He is also still improving. There remains some promising challenges for Navarrete at 126 pounds, namely Gary Russell Jr., but the real tests will come at 130 pounds, and that’s where we figure to find out just how good he is. Even in his third weight class, he’ll still be one of the bigger fighters in the division. How about the winner of next week’s title fight between Jamel Herring and Shakur Stevenson? Or bouts with Miguel Berchelt and Chris Colbert?

Navarrete may be raw, but the blend of volume punching, awkward angles and size has proven too much so far.

Is Joet Gonzalez a legitimate title challenger for Emanuel Navarrete?

Baby: No. The intrigue surrounding Joet Gonzalez since he re-signed with Golden Boy Promotions in 2019 has not produced anything substantial. To date, Gonzalez’s best victory is a knockout win over Manuel Avila in 2019.

But aside from that, Gonzalez has yet to show he’s worthy of a true title shot. He was easily trounced by Shakur Stevenson in 2019, his lone title fight. Gonzalez also has no victories over any of the featherweights currently in ESPN’s Top 10 ranking despite consistently fighting in the division since 2015. It makes little sense for Navarrete, too, since he has few high-profile opponents on his ledger. There are several other names who will boost his profile and recognition around boxing. Perhaps Mauricio Lara, who made his name with a big upset win over Josh Warrington back in February. Both Lara and Navarrete both hail from Mexico.

Navarrete is an exciting fighter that should be matched against tougher opposition. At 26 and as a current champion, he’s past the point in his career where he should be taking on the likes of Joet Gonzalez.

​​What do you need to see from unbeaten Diego Pacheco to anoint him a challenger at 168 pounds?

Bradley: He’s still young at 20 years old and you don’t need to move him quickly. I can see his talent. He has what I call the most important punch in boxing: the jab. He has a really good jab and if he continues to use it, along with his reach to set up his offense, he’s going to beat a lot of guys. He needs to keep working on his jab, get more variety, throw it to the head and to the body, just give it different looks and change where he throws it from.

His rhythm is very good — he flows, he’s smooth — but he needs to alter his rhythm, throw different combinations. He has a beautiful uppercut, a right uppercut he throws on the inside. He needs to get more strength. Because he’s 20 years old and even at 6-foot-4, he hasn’t reached his top strength yet.

I really want to see how he deals when he fights someone crafty on the inside. I would like to see him control the center of the ring against Lucas de Abreu, and I want to see his body work. But if he controls the ring and works the body, throws his right hand to the liver, just using a different way of landing to the body — if he can figure out how to land more body punches and put that in his arsenal — that will definitely step up his game. Sometimes he throws that right hand from too close, but if he throws it from a distance, from the outside, it will have more effect and he won’t be there for the counter.

For this fight against a puncher like de Abreu, I want to see him use his defense, take his time, don’t make any mistakes and hit the body and take some steam from the opponent’s punches.

What is Mikey Garcia really doing? Why is he fighting Sandor Martinez?

Rothstein: Honestly, I’m not sure. Garcia hasn’t fought since a unanimous decision win over Jessie Vargas last February and now he’s fighting an opponent in Sandor Martin who has an impressive record (38-2, 13 KOs) but whose competition has been less than stellar. Maybe this is kind of a warmup fight for him since he’s had such a long layoff? That’s one of the few reasons this would make sense.

When you look at his opponents in his last five fights, dating back to 2017, it’s a reasonably talented list — Adrien Broner, Sergey Lipinets, Robert Easter Jr., Errol Spence Jr. and Vargas. He lost just one of those fights (Spence), but all came by decision. If Garcia is treating this as a tune-up to then become more active, it makes sense as a fight.

Otherwise, it feels like almost a no-win situation for Garcia. Win and you’re completely expected to; lose and there’s a lot to wonder about. Martin, meanwhile, could gain a massive boost to his career. Odd fight.

Should Mairis Briedis follow Usyk’s path and move up to heavyweight?

Coppinger: Unquestionably that’s the plan for Brieidis, who said months ago on social media that he would move up to heavyweight soon. Instead, in this fight, he’ll stay busy against a no-hope opponent, Artur Mann. In reality, it doesn’t matter whom he faces at cruiserweight; there are no compelling matchups.

As a cruiserweight champion — and someone who gave Usyk by far the toughest challenge of his career — Briedis would immediately be installed as a player at heavyweight.

He’s had a few fights in the unlimited weight class, most notably a brutal fifth-round KO of Manuel Charr in 2015. For that fight, he weighed just under 214 pounds. At 6-foot-1, he would be vastly undersized for the division.

But in a majority-decision loss to Usyk in 2018, Briedis proved he might have the skills to overcome shortcomings in other areas. There’s nothing left to accomplish at cruiserweight. If nothing else, it’s time for the 36-year-old to earn some heavyweight purses.

Chatterbox Exclusives: George Warren and Beterbiev join the gang | Artur Beterbiev v Anthony Yarde
Eubank will “let the dust settle” before deciding on Smith rematch
Overcoming Artur Beterbiev is Anthony Yarde’s toughest challenge yet, but he’s entering the ring without fear
It’s official, Jake Paul and Tommy Fury will settle things once and for all 🥊#PaulFury
When it comes to Artur Beterbiev, sparring partner Callum Simpson says: “Believe the hype”