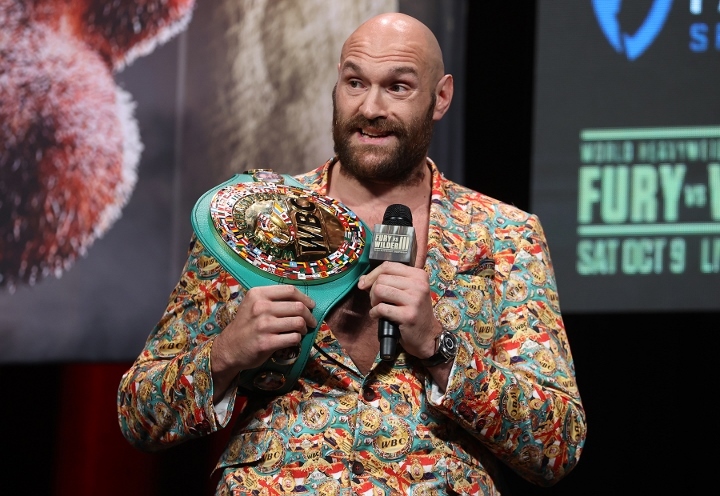 WBC heavyweight champion Tyson Fury admits that he doesn’t know what the future holds for his boxing career.

Last weekend, Fury picked up a sensational knockout victory over Deontay Wilder at the T-Mobile Arena in Las Vegas.

In their third encounter since 2018, Fury overcame two knockdowns to stop Wilder in the eleventh round.

The next fight for Fury would likely be the winner of the upcoming fight between Dillian Whyte and Otto Wallin, which takes place on October 30.

The World Boxing Council is expected to order Fury to face the Whyte vs. Wallin winner.

If Wallin wins, there is a possibility that Whyte will exercise a rematch clause and then Fury would have to explore other options for his next outing.

“I don’t know what’s going to happen,” Fury told The Telegraph. “I’ve got one fight left on my contract with Top Rank and ESPN and we’ll see what that is.

“I am motivated to get up in the morning, do a little bit of training, and enjoy my day. I don’t have any goals in boxing, I have done everything and won everything, the only one to do it in my era.

“I will always have been the WBC, WBA, WBO, IBF, Ring magazine champion, that will not evaporate in history, but once it is done, it is done and you cannot get it back. Once you are done, it doesn’t matter how many belts you have, who you beat, what your record is. You are just another bare bum in the shower and I have always had that opinion.”

“Yarde is the special one, not Beterbiev,” says Tunde Ajayi
A Life’s Work: Anthony Yarde and the eight-year training camp
Bob Arum: Location For Tyson Fury-Oleksandr Usyk Fight To Be Announced Next Week
ICE COLD! Artur Beterbiev vs Anthony Yarde • FACE OFF after final press conference | BT Sport Boxing
Editor’s Letter: It’s likely to be a long road back for Chris Eubank Jnr