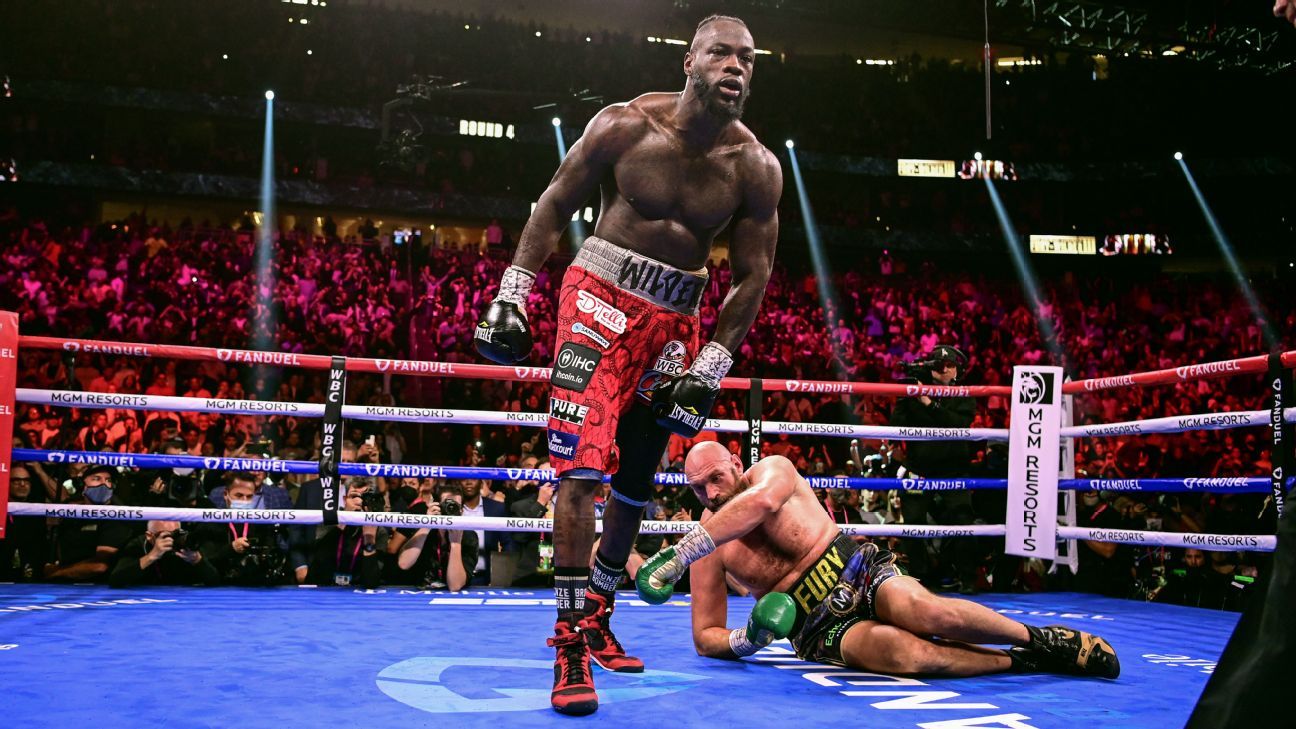 Deontay Wilder’s vaunted right hand — the most dangerous weapon in boxing — produced two fourth-round knockdowns of Tyson Fury in their all-time great heavyweight title fight Saturday, but the hand was far from 100% during the second half of the bout.

Wilder’s co-manager, Shelly Finkel, told ESPN on Thursday that the former heavyweight champion suffered a broken right hand “somewhere around Round 6” of the 11th-round KO loss to Fury in Las Vegas.

Wilder will have surgery Monday in Atlanta to repair one of the middle metacarpals, and according to Finkel, won’t be able to train for approximately 3½ months.

“He’ll fight sometime in the spring or early summer as long as he’s healthy and he’s good and he’s up to it,” Finkel said. “He’s still in pain with the hand and his equilibrium was off, somewhere around the third round (Fury connected behind the ear), that’s why his balance wasn’t the same.

“He feels he trained so hard and then the two incidents — no disrespect at all to Fury — he put in all that effort and wasn’t able to fight him healthy.”

Fury (31-0-1, 22 KOs) scored a knockdown in Round 3 before dropping the 35-year-old again in Round 10 and finally, for good, in the 11th round of their trilogy. They met for the first time in December 2018, a controversial draw in which Wilder scored two knockdowns, before Fury dominated Wilder via seventh-round TKO in the February 2020 rematch.

The Gypsy King walked across the ring after the fight to pay his respect to Wilder, who was sitting on his stool, but Fury found no reciprocation. Instead, Wilder responded with “No love … I don’t respect you.”

Said Finkel: “After the fight you come back to your corner, you have a broken hand, you’re disoriented. Your mind isn’t there.”

On Thursday, Wilder paid respect to Fury in an Instagram post: “I would be lying if I said that I wasn’t disappointed in the outcome. … Sometimes you have to lose to win. … Last but not least I would like to congratulate [Fury] for his victory and thank you for the great historical memories that will last forever.”

Wilder (42-2-1, 41 KOs) suffered a laceration on his left ear but no stitches were necessary, Finkel said. “The Bronze Bomber” couldn’t walk straight on Sunday, but by Monday, his equilibrium had returned, Finkel said.

The Olympic bronze medalist maintained his No. 3 spot in ESPN’s heavyweight rankings — one spot ahead of Anthony Joshua — with his valiant performance in defeat.

“In losing he gained more respect than in his other fights,” Finkel said. “They now see that part of him that he’s not a quitter.”

Indeed, Wilder’s stock improved with the defeat. He wasn’t remotely competitive with Fury in the rematch and complained when cornerman Mark Breland threw in the towel. When he pressed for his contractual right to a third fight, many fans and observers insisted that there was no need to see them fight again. Wilder explained that he’s never out of a fight with his vaunted right hand and that he would rather go out on his shield.

He proved that both reasons were genuine: He never stopped fighting until the end and appeared to stun Fury with a big right in the 10th round.

Wilder is no longer champion, but plenty of major fights await him. Even with no title on the line, the long-proposed bout with Joshua is perhaps bigger than ever.

First, Joshua will attempt to regain his unified heavyweight championship against Oleksandr Usyk in the first half of 2022.

There’s also a mouth-watering matchup with former champ Andy Ruiz Jr., and even a fight with Dillian Whyte, provided he beats Otto Wallin later this month.

“Although I wanted the win I enjoyed seeing the fans win even more,” Wilder said. “Hopefully I proved that I am a true warrior and a true king in this sport.”