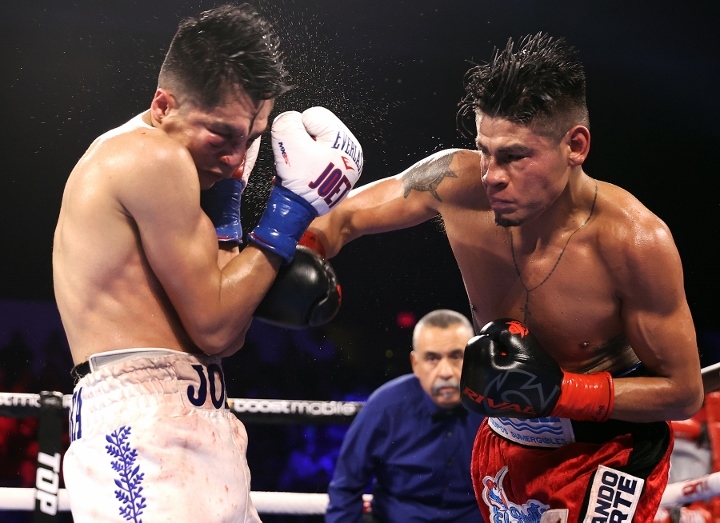 Emanuel “Vaquero” Navarrete and Joet Gonzalez engaged in a border war for the ages.

“It was a very close fight but I think the difference between us was conditioning,” Navarrete said in his post-fight interview. “I hurt him, but every single time he came back. He also hurt me with a couple of shots that he landed during the fight.”

It was the second successful title defense for Navarrete, who moved up to the featherweight ranks last year after defending his junior featherweight crown five times.

“It has been an exciting ride so far, and from now on I want the bigger fights,” said Navarrete.

The bigger fights could include an eventual move up to 130 pounds, where a match with WBC champion Oscar Valdez would be one of the biggest all-Mexican showdowns in the sport.

But on this night, Navarrete had to contend with the stubborn Gonzalez, who hung in tough despite swollen right eye in the early rounds. Navarrete threw 979 punches, including 104 in the 12th round to close the show in style.

Gonzalez now goes back to the drawing board, after losing out in his second world title fight. He dropped a lopsided twelve round decision to Shakur Stevenson in 2019, for the same WBO world title that his currently held by Navarrete. Stevenson vacated the belt for a move to super featherweight and challenges WBO champion Jamel Herring next Saturday night.