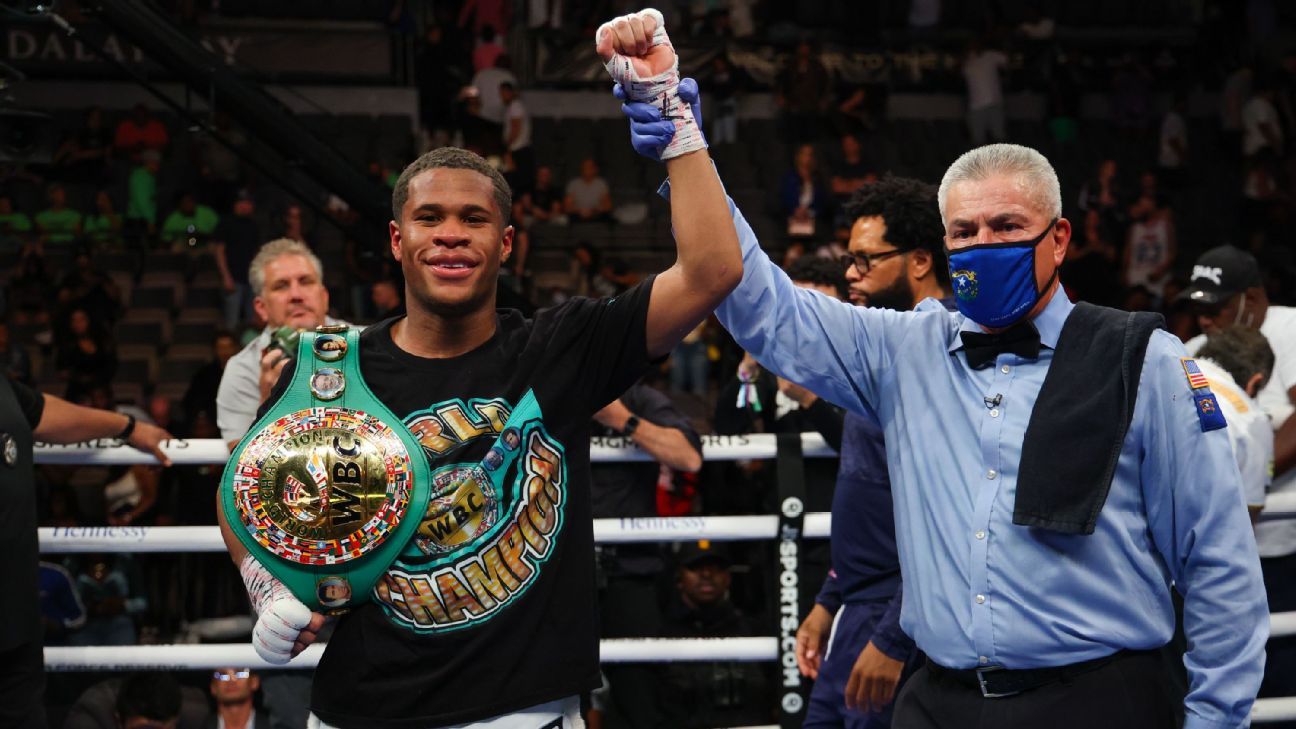 Devin Haney is slated to return to the ring Dec. 3 in Las Vegas, the lightweight titleholder told ESPN, a fight he hopes will come against Joseph Diaz Jr.

For months, Haney has searched for a topflight 135-pound opponent. He traded barbs with Diaz on Twitter, but the former 130-pound champion pursued a fight with Ryan Garcia, a bout that was agreed to for Nov. 27.

On Friday, it was revealed that Garcia suffered a hand injury that requires surgery, freeing up Diaz for the potential fight with Haney on DAZN.

“I think that JoJo would be my best opponent on paper so far,” said Haney, ESPN’s No. 3 lightweight. “Main thing is making the fight happen. I think he’s a good fighter, but I’m on a whole ‘nother level.

“I hope he doesn’t price himself out. The new way of ducking these days is pricing yourself out.”

“I’m willing to fight Devin Haney this year. Everything has to make sense and be on an even playing field,” Diaz, 28, told ESPN. “I want the fight. I trust in my team, Golden Boy Promotions and MTK.”

Diaz (32-1-1, 15 KOs) outpointed Javier Fortuna in July in his lightweight debut. Garcia was slated to fight Fortuna on that same date but withdrew to address his mental health.

Haney (26-0, 15 KOs) is coming off the biggest win of his career, a decision victory over Jorge Linares in May. The 22-year-old Haney, along with Gervonta Davis, Teofimo Lopez and Garcia, make up a quartet of rising stars in the lightweight division, yet there have been no fights among the four yet.

“I definitely think I’m the most avoided fighter in boxing,” Haney said.

If he doesn’t land the fight with Diaz, Haney said he plans to stage his next bout at 140 pounds. Haney mentioned former junior welterweight champion Viktor Postol as a possible opponent.

But for now, the target remains Diaz.

“Hearing the news today, we definitely want to try and get Haney vs. Diaz made,” Hearn told ESPN. “It’s a fight I felt should have happened anyway, so hopefully we can get it over the line now.”

With Garcia-Diaz off Nov. 27, the lightweight championship bout between Teofimo Lopez and George Kambosos will likely replace it on the DAZN schedule, sources said. Hearn landed the rights to the fight after Triller defaulted on the bid.

Benavidez vs Plant Is ON for March 25 on SHOWTIME PPV in Las Vegas
Sources: Ortiz-Stanionis bout set for April 29
Frank Warren: Yarde ‘a more powerful puncher’ | Artur Beterbiev v Anthony Yarde | Boxing exclusive
Hungry rabbit… 🤣 Usyk is a different breed 🍔
‘You only fight him because you have to’: Why nobody wants to get into the ring with light heavyweight champion Artur Beterbiev