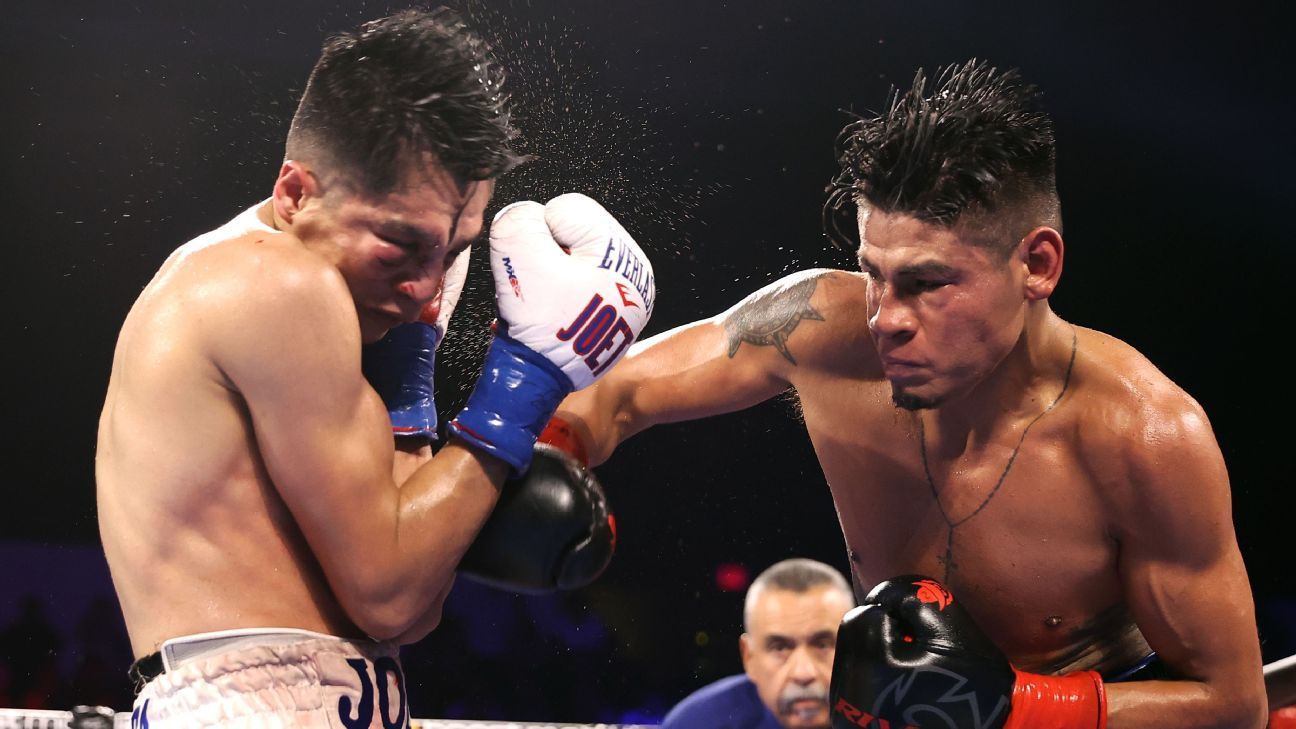 Emanuel Navarrete’s face looked clean, like he’d just completed a strenuous run. Across the ring, the face of Joet Gonzalez looked like it was going through what both men were actually doing Friday night — fighting for the WBO featherweight championship.

While Navarrete successfully defended his featherweight title with a 118-110, 116-112, 116-112 unanimous decision over Gonzalez, it was a constant action fight that could end up being a candidate for fight of the year.

Neither fighter went down — although the 26-year-old Navarrete (35-1, 29 KO) fell multiple times during the fight due to tripping. Both fighters threw a massive amount of punches instead of being more patient in what they tried to land.

Navarrete won the fight, but Gonzalez showed how good of a fighter he can be. The 28-year-old Gonzalez (24-2, 14 KO) did what many other fighters cannot do — seemingly handle Navarrete’s high work rate well. At times, Gonzalez matched Navarrete’s constant flurries of punches with combinations of his own. It helped keep the fight competitive, even as Gonzalez’s face continued to get cut.

This, though, was the type of fight Navarrete wanted. After the victory he said he wants to be in big fights in the future and would be open to a rematch against Gonzalez — a fight Navarrete said he would win again.

Navarrete’s power started to show in the second round, when he first cut Gonzalez — a gash under Gonzalez’s right eye that became even bigger in the third round and appeared to re-open multiple times. After the cut was initially created by a left from Navarrete, Gonzalez’s cut man, Mike Bazzel, told ringside reporter Mark Kriegel that he was more concerned about the swelling underneath Gonzalez’ eye — swelling he worked on between almost every round.

“I felt good,” Gonzalez said. “He did catch me with a punch.”

Gonzalez said the swelling didn’t bother him much throughout the remainder of the fight. By the eighth round, Gonzalez’s white trunks had become partially pink and red. But Gonzalez, despite the cuts and the plethora of punches from Navarrete, continued to throw and land combinations. Gonzalez continued to handle whatever hard power punches Navarrete threw.

Despite the champion’s power, Gonzalez rarely appeared in real trouble of being knocked down.

“Without a doubt I hurt him but every single time he came back,” Navarrete said. “And he hurt me. A couple shots landed, hurt me during the fight.”

It was a work rate typical of a Navarrete fight, but something difficult to prepare for or truly understand due to the angles he throws punches from and the style he fights with. Gonzalez, in his second attempt at claiming a title, showed he can handle that — even if he didn’t win a belt.

PBC Thanksgiving Day Fight Playlist | Fights We’re Thankful For
Bivol on Canelo Rematch: First He Said It Wasn’t His Weight Class, Now It’s His Arm; What [Can I] Say?
Should Stephen Fulton and Brandon Figueroa Run It Back?!
Zepeda vs Prograis: Live updates and results, 9 pm ET
Fury: Me and Chisora Are Going To Punch The F— Out of Each Other