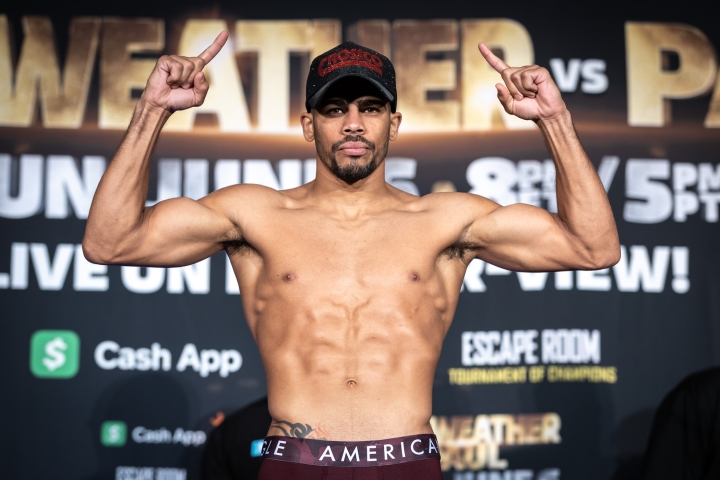 One of Mayweather Promotions’ top prospects will face what on paper appears to be his toughest test October 30.

As previously reported by BoxingScene.com, Showtime’s telecast October 30 will showcase welterweights in the main event and co-feature.

Minneapolis’ James (27-1, 12 KOs) will defend his WBA world welterweight title against Russia’s Radzhab Butaev (13-0, 10 KOs, 1 NC) in the 12-round main event. Butaev is owed a shot at James’ secondary WBA belt because Alexander Besputin tested positive for a banned performance-enhancing drug after he beat Butaev by unanimous decision in their 12-round title fight in November 2019 in Monte Carlo.

Torres, 31, has won eight straight bouts by knockout or technical knockout since he edged Kevin Nieves by split decision in an eight-rounder in June 2018. In his most recent action, Torres knocked Zack Kuhn (10-8-1, 5 KOs) to the canvas twice in the second round of a bout he won by TKO in the same round June 6 on the Floyd Mayweather-Logan Paul undercard at Hard Rock Stadium in Miami Gardens, Florida.

The 32-year-old Price’s lone loss was the result of a knee injury he sustained during the fifth round against then-unbeaten Malik Hawkins in December 2019. Price had won each of the first four rounds on all three scorecards entering the fifth round versus Hawkins in a fight Showtime televised as part of the Gervonta Davis-Yuriorkis Gamboa undercard at State Farm Arena in Atlanta.

Price won his only bout since he suffered that knee injury on April 21. He knocked out Saul Corral (23-17, 13 KOs) in the fifth round of their scheduled eight-round bout at Shrine Auditorium & Exposition Center in Los Angeles.