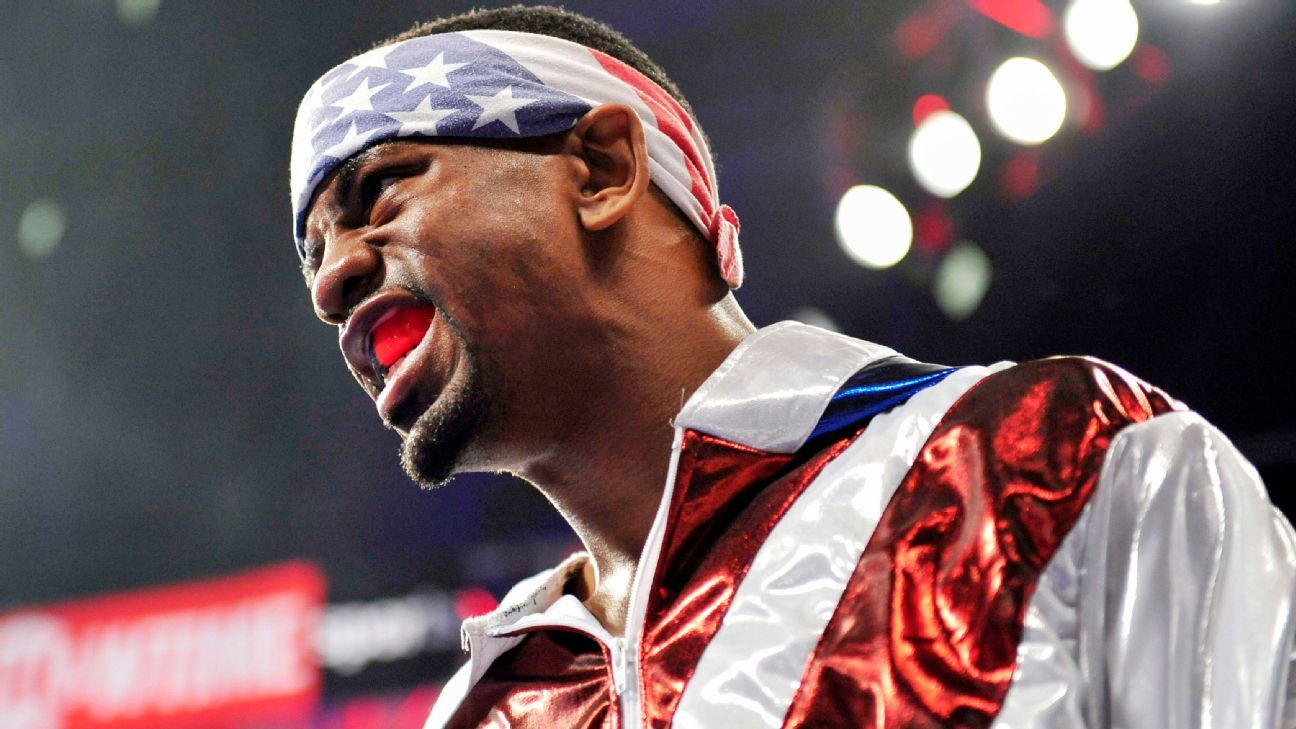 Editor’s note: This feature was originally published ahead of Jamel Herring’s fight against Masayuki Ito in May 2019. Herring beat Ito by unanimous decision. He will defend his title against Shakur Stevenson on Oct. 23, 2021.

COLORADO SPRINGS, Colo. — Some fighters you love for what they can do in the ring — a sublime skill, perhaps, or an aptitude for devastation. Then there are others, even more rare, you come to love for what they represent. On Saturday night, Jamel Herring should be recognized as the latter.

At 33, he’s not young, certainly not for his first title shot (he’ll be fighting Masayuki Ito for the WBO junior lightweight title). Herring has lost more than time, though. While his contemporaries were winning amateur tournaments, Herring was a Marine in Iraq, where he served two tours. He left as a kid from Coram, New York, on Long Island, and returned as an adult, ostensibly unwounded but unaware of the ways in which he’d been internally disfigured. Herring’s is not an uncommon story in a nation that’s basically been at war since 2001.

But it’s not just Memorial Day weekend. May 25 is also his first daughter’s birthday. Ariyanah would have been 10.

Herring had boxed as a teenager. He was pretty good, in fact. But he was pretty good at track and basketball, too, before he got dropped from the school’s basketball team for lousy grades. The sports weren’t who he was. They gave him no identity. “To be honest,” he says, “I didn’t really think much of myself.”

It wasn’t a universal opinion, however. There was Stephen Brown, a year older but long his closest friend. “He saw something in me,” Herring recalls, “He knew I could be a better person than I was at 17.”

In fact, what Brown saw was a kid trying to avoid the same fate as many of their buddies — hanging out in Gordon Heights Park, slinging drugs or worse. Brown had avoided it by enlisting in the Marines. Now he had returned, resplendent in his dress blues.

“You know there’s nothing for you here,” Brown said. “Why don’t you join?”

In short order he did, and by 2005, Herring had shipped out for Iraq. His first tour was in Fallujah, his second in a city called Al Taqaddum. Looking back, his service seems remarkable only for how typical it was, the daily reality for a generation deployed:

“Incoming fire from mortar rounds, one after another … just basically making it to the next day was a blessing. …

“One story that actually bothered me the most was a female Marine that got killed. It was at night. She was having a smoke …”

Snipers. He was always worried about snipers. Especially on patrol with a Humvee.

“Being a gunner, during my security detail on my second deployment, you always had to be the eyes on the road. … Sniper fire. That was my biggest fear. Whenever we got stopped, I felt like I was a sitting duck, ’cause I’m on top of that Humvee. That was probably the most nerve-wracking thing of it, basically being stuck in the middle of nowhere. …

“I seen one Humvee hit a pressure plate and when the explosion hit, it split the whole front.”

Herring couldn’t recall how many Marines he knew who died in scenes like that. There was one sergeant, though, who remains with him. He was an explosive ordnance device technician, and always taught caution when spotting and dismantling a bomb. “He was telling us that he had a 2-week-old son, and after that class, maybe a week later, he got killed in an explosion. That really triggered something in me.”

Back home, Herring’s girlfriend was pregnant with their first child.

The boy was named Stephen, after the friend who, by now it was clear, had shaped Herring’s life. Jamel couldn’t meet the baby until he got home in 2007. Still, if he hadn’t been there for the birth of his first child, he’d be there for the second, a girl named Ariyanah. She was born May 25, 2009. Memorial Day.

“One of the best feelings in the world,” he says.

He’d resumed serious training by then. Boxing for the Marine Corps kept him stateside and close to his family. Life was good. Then, just two months later, he heard a scream from upstairs. It was Ariyanah’s mother.

“I ran up to go check,” Herring recalls. “I took my daughter out of the crib. I laid her on the bed. I tried to give her CPR. She wasn’t breathing. I was just trying everything. I remember telling her mother to call an ambulance. I’ll never forget sitting in that waiting room at the hospital, and the doctor came out and he sat with us for a while and all that time I’m thinking: ‘Everything’s OK. Everything is OK.’ Then he was just telling us, ‘I’m sorry to tell you, but we lost her.’ She had passed away from SIDS.” Sudden infant death syndrome.

Herring stopped training. He stopped doing much of anything. He didn’t often leave the house. “Just mourned,” he said. “Maybe I could have done something or I could’ve watched over her more carefully. I put a lot of blame on myself. Even, even up to this day. What could I have done?”

He didn’t take many calls from his family. He nodded blankly at his Marine Corps boxing teammates.

“We need you back in the gym,” they’d say. But Herring wasn’t having it.

“I just kind of disappeared,” he says.

Eventually, Ariyanah came back to him. Not as the infant she was. And maybe not with words. A spirit, yes, still difficult to explain. Is she a psychic construct, or a divine one? Both, perhaps. But the distinction itself is probably meaningless. She was there, tangible, and he felt that, like the Marines, she expected a certain standard of conduct.

Having to answer to Ariyanah made him a better, more determined fighter than anyone — including Herring himself — had ever imagined. He won an Armed Forces title, then a U.S. national championship. Finally, on July 27, 2012, the third anniversary of his daughter’s death, he walked out for the opening ceremonies of the London Olympics as captain of the U.S. boxing team.

“I always think that she’s watching,” he says. “I believe she sees that I’m trying to do my best, even through the ups and downs.”

It would be neat to think that Ariyanah’s presence made for a straight path from the Olympics to his title shot. It did not, of course.

He has changed managers, promoters and trainers (eventually finding a home with Brian McIntyre and Terence Crawford’s crew), even divisions. There were a couple of losses — one by TKO — and a crisis that, like the knockout, he never saw coming.

It began a couple of years ago, but how he couldn’t say. Something stirred it all up, the memories, the images: The female Marine picked off by a sniper. The EOD sergeant. A tortured metal sculpture — that Humvee split by an explosion. Baby Ariyanah. And maybe most vividly of all, Stephen Brown, from Coram, his fellow Marine. If Brown set the course of his life, Herring never got a chance to thank him. Brown died of cancer in 2004, as Herring was still waiting to deploy.

There were nightmares. Not much sleep. He became paranoid. Again, Herring didn’t leave the house much, but when he did — say, to a restaurant — he’d sit with his back to the wall and watch the door. Clock who’s coming and going.

“Even now,” he says, “I have to feel like I know each and every exit.” On the treadmill in the gym, he’d be scanning for suspicious characters from the corner of his eyes. You never know when the next mass shooting is going down, but he spent a lot of time thinking about it and what it would be like. Just another type of war zone.

He denied it at first. And then he didn’t.

It wasn’t the easiest thing, getting help. “I was actually afraid,” Herring recalls. “I didn’t know how I would be looked at.”

But all the therapists said the same thing: “You’re not alone.”

It wasn’t a miracle cure. But he got better. By the week. By the month. By the fight. Last year he decided to move down in weight, from lightweight to 130 pounds, for a better chance at a belt.

“I’m actually now getting to where I want to be at, where I dreamed,” he says.

But if the doctors and the counselors at the VA were there for him, so was Ariyanah. She doesn’t insulate him from these down periods; she helps him through them.

“Even now when you see me fight, I always have her name on my trunks. Everything I do right now is in her honor. That’s how I look at it.”

But just as she’s watching, maybe someone else is, too. Someone who might gain from watching a Marine veteran fight for a title on Memorial Day weekend, on what should’ve been his daughter’s 10th birthday. Someone who came back like him, a little twisted up in places you can’t quite see.