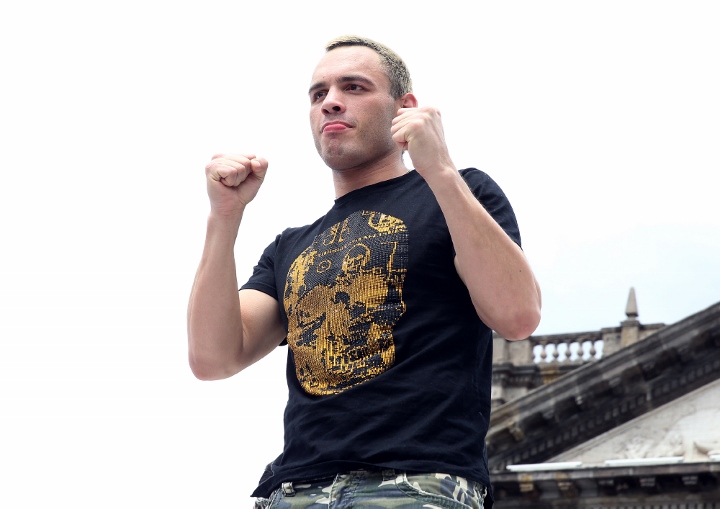 Julio Cesar Chavez Jr. is back on the suspension list.

The second-generation boxer and former WBC middleweight titlist from Culiacan, Sinaloa, Mexico was issued a retroactive three-year suspension by the Nevada State Athletic Commission (NSAC) stemming from an unresolved drug testing violation in October 2019. The ruling was handed down during the monthly agenda hearing Wednesday at commission headquarters in Las Vegas.

The five-person panel voted unanimously on the proposal issued by Mike Detmer, deputy attorney general for the state of Nevada on behalf of NSAC executive director Bob Bennett. The suspension will run through October 24, 2022. Chavez Jr. is also required to pay a fine of $3,197.72 and submit to a commission-approved random drug testing program for the suspension to be removed even beyond its current expiration date.

Chavez Jr. (52-6-1, 34KOs) was previously placed on temporary suspension by the NSAC upon being informed by Voluntary Anti-Doping Agency (VADA) that Chavez Jr. evaded testers who arrived at Wild Card Gym in Hollywood in seeking a urine sample from the boxer in October 2019. The suspension was formally issued October 29, which affected plans for Chavez Jr. to face fellow former middleweight titlist Daniel Jacobs on December 17, 2019 at MGM Grand Garden Arena in Las Vegas.

The bout was relocated to Talking Stick Resort Arena (now Footprint Center)—home to the NBA’s Phoenix Suns—though not before a lengthy legal batter between Chavez Jr. and the NSAC. The Arizona Boxing and Mixed Martial Arts (MMA) Commission had to wait out a final hearing just two days before fight night, as Chavez was granted Chavez a temporary restraining order against the Nevada commission to allow the event to be approved in Arizona.

Chavez went on to lose the fight after being forced to retire on his stool after five rounds due to a broken nose. His in-ring action drew the disappointment of his legendary father, Hall of Fame former three-division champion Julio Cesar Chavez Sr. who literally face-palmed at ringside. A more serious development occurred seconds later as fans began hurling objects into the ring, forcing event handlers to clear the venue before allowing a final bout involving Gabriel Rosado—the stand-by opponent for the main event—to proceed.

The temporary suspension was extended soon thereafter by the Nevada commission, who subsequently placed Chavez on indefinite suspension last May 12. The Arizona commission followed suit, although Chavez has not since fought in the United States. Three fights have followed for the now 35-year-old boxer, all taking place in his native Mexico. A comeback fight last September saw Chavez suffer an upset technical decision defeat to unbeaten countryman Mario Cazarez, quickly rebounding with a fourth-round knockout of Jeyson Minda last November in his Culiacan hometown.

Both fights took place at light heavyweight, as did his loss to Jacobs though the latter only due to his inability to honor the contracted limit. Chavez once again blew weight for his most recent fight, a stunning split decision defeat to middle-aged former UFC champion Anderson Silva this past June 19 in Guadalajara. Silva, 46, had not boxed in 16 years heading into the fight but emerged victorious in their sanctioning eight-round bout where Chavez entered at a beefy 184 pounds, well over the contracted 182-pound limit.

Chavez recently announced plans to return to the ring either this coming December or next January. Any such fight will have to take place outside the U.S., as will any other ring plans prior to next October 24.

The matter is Chavez’s third strike with the Nevada commission.

Chavez tested positive for the banned substance Furosemide surrounding his Nov. 2009 win over Troy Rowland at MGM Grand. The verdict was subsequently changed to a No-Contest, with the violation accompanied by a seven-month suspension and a $10,000 fine.

Nearly three years later, Chavez Jr. made his way back into town, only to once again land in trouble. At the time an unbeaten WBC middleweight titlist, Chavez saw his reign and unblemished record go awry after dropping a 12-round to then-lineal champion Sergio Martinez in Sept. 2012 at Thomas and Mack Center in Las Vegas.

The loss carried an additional hit. A post-fight drug test showed marijuana in his system, at the time on the list of banned substances. Because it was his second offense, the boxer was hit with a nine-month suspension and a whopping $900,000 fine, 30% of his $3 million fight purse.