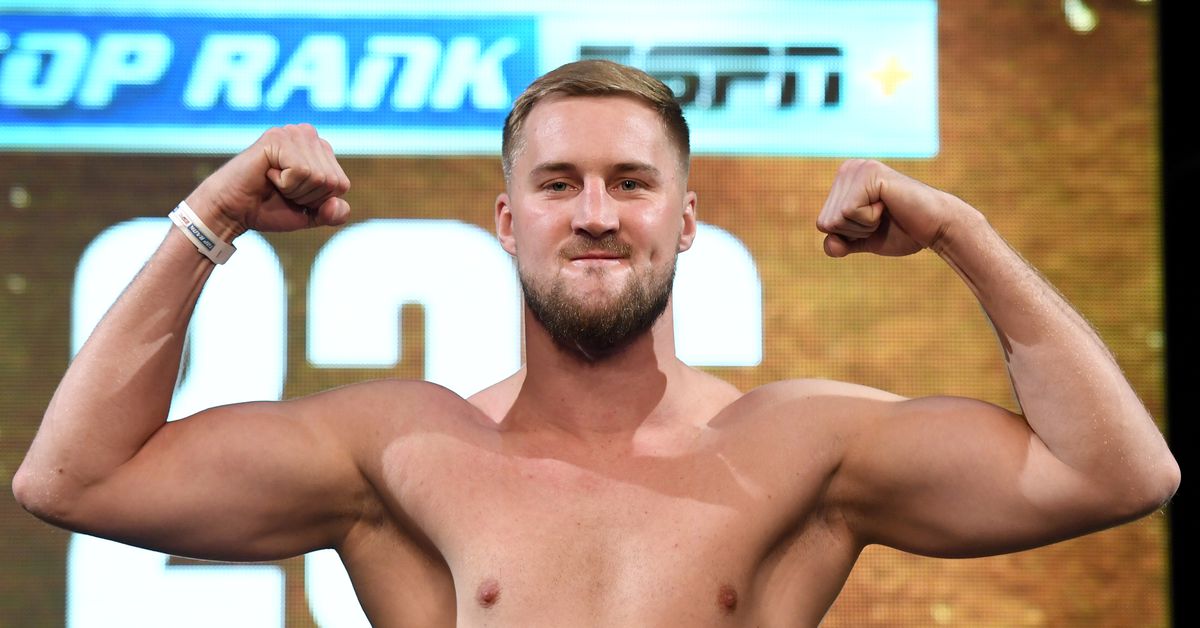 Otto Wallin is in a big club of fighters who thought they’d booked fights, only to see the matchup fizzle out.

Heavyweight Wallin (22-1, 14 KO) said he’s stayed true to his personality and didn’t allow any frustration to boil over. So he stayed close to ready when a battle against Luis Ortiz didn’t materialize, and pounced when a faceoff with Dillian Whyte got offered.

“I’ve done a lot of training,” said the 30-year-old Swede. “I was expecting a fight in July that didn’t come through. August was a tough month. I was expecting to have fought already, and I’d been training since February. In September, we were offered Ortiz (for) November, I was told.”

Wallin said yes to the Ortiz offer, and then the fight got tabled. Wallin stayed positive, and shared his mantra when he’d get irked with all the outside the ring machinations, the stops and starts and teasing: “At least I’ve had two fights during the COVID period.”

Coming off a February victory over Domininic Breazeale, Wallin, trained by Joey Gamache, had no hesitation when he was pitched Whyte. Let’s do it, Wallin said. And so they will, at the O2 Arena in London, Oct. 30.

Whyte, 33, holds a 28-2 (19 KO) record, and will be the bulkier man in the battle, which will screen on DAZN. The WBC interim heavyweight crown, which Whyte holds, will be on the line.

“In all honesty, Whyte might be the favorite, but I think a lot of people are giving me a shot, much more than was the case coming into my fight with Tyson Fury (in 2019),” said Wallin. “This is good timing, so I’m not worried about what other people think.

“One of the factors in play is, (Whyte)’s been in a lot of wars, and I haven’t,” said the 6’5” southpaw, who can rely on a bedrock of basics, which isn’t at all a slam. The basics can take a fighter further than many assume, because, to be frank, few people can truly boast something close to a mastery of “simple” techniques.

That’s not to say Wallin is a really rudimentary sort; he’ll put some combos together that are well beyond beginner class. But he’s thinking that his skill set matches well with Whyte, who has taken harder knocks than Wallin.

Joseph Parker put Whyte on the mat in the final round of their fight. And Derek Chisora connected to the point he was up on the cards when Whyte finished fine with a round 11 stoppage triumph in their rematch. Oscar Rivas, now fighting at “bridgerweight” — the new WBC division — put Whyte on the mat in round nine when they collided. Whyte looked past prime when he didn’t handle Mariusz Wach as smoothly as expected, and he acknowledged that after. Whyte dropped from 271 lbs to 252 for his next test, and that was working for him until Alexander Povetkin delivered a hellacious uppercut in round five, after being thisclose to being shut down by Whyte, who sent Povetkin down twice in round four.

In Whyte’s last gig, he enjoyed a win over Povetkin which featured less drama and trauma than has become the norm. But, Wallin told me, who can say what all those knockdowns and the clean connects have taken from Whyte?

You get the point — Whyte is not a defensive wizard, but he’s been blessed with a chin that passes the test when checked, by and large. That chin has been less cooperative recently, though, so even though Wallin isn’t really a power puncher, his hands could seem that much heavier if Whyte’s whiskers are compromised by mileage.

“He’s been aging a little bit,” Wallin said. “I’ve seen that in the Povetkin fights. He gets heavy credit for his toughness. But boxing can have a more lasting effect as you get older.”

But Wallin isn’t overlooking what Whyte brings to the table, either.

“He’s a decent fighter, has a decent jab, a good hook, he likes to go to the body,” he said. “Compared to Tyson Fury, he’s a pretty basic guy.”

Finding sparring to mimic Whyte is a breeze compared to prepping for the “Gypsy King” back in 2019.

“I think going into this fight, I’m better, more fresh, the more intelligent fighter. I think I’m faster, have better defense and offense, and also better footwork.” Plus, he said, there’s a decent possibility his southpaw stance throws off Whyte.

He’s not jumping ahead, but I go there: Wallin said he sure did tune in to the recent Fury-Wilder contest, and with a Fury rematch possibly on Wallin’s plate should he win on the 30th, he had some thoughts.

“I thought maybe Wilder did a little better than I expected, and he showed a lot of heart, his heart and his power kept him in the fight. And what should Fury do next? He should do his WBC mandatory! That would be either me or Whyte.”

Wallin is of the belief he will be in a position to care a good deal more what Fury does next after Oct. 30.

“I’m happy,” he says. “I can’t wait to put on a good show. I don’t even know if I’m at my peak as a pro. I feel like I’m getting better all the time, and I haven’t been in those really tough fights reaching this level.”