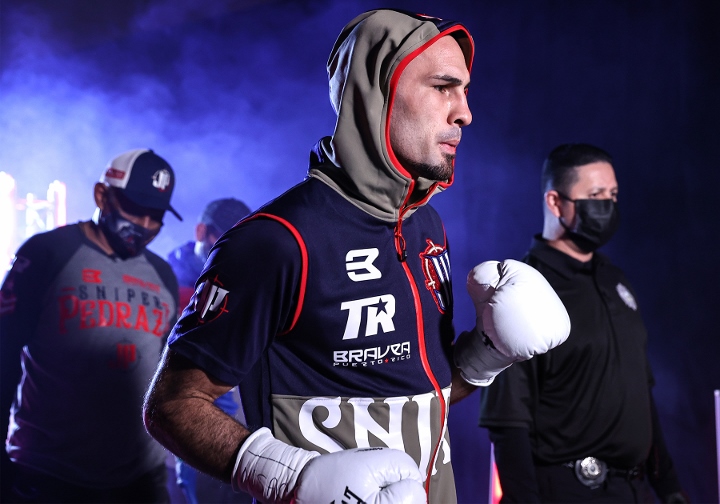 The departure of Puerto Rican super middleweight Edgar Berlanga from the undercard that Top Rank will present on December 11 at Madison Square Garden in New York, may have opened a door for two-division world champion Jose “Sniper” Pedraza .

As the boxer explained, he is waiting to get official word on whether or not he will participate on that card since Berlanga suffered an injury to his left bicep that will require surgery and months of recovery time.

“I have been training for three or four months. There is the possibility of fighting against Arnold Barbosa Jr,” said Pedraza (29-3, 14 KO) to Carlos Gonzalez.

“We decided to gain weight to gain muscle mass because that was the advantage [other fighters at 140] had over me. On fight night [my opponents] were up to 160 pounds, while I was barely 150 pounds. It was then that we decided to hit the weights hard to get that muscle mass needed to get up to 170 pounds,” Pedraza said.

Pedraza explained that once he confirms the date and the opponent, he would dedicate himself to cutting weight.

“Obviously you lose a little muscle mass [when you cut weight], but it is minimal. I get to 140 pounds, but I’ll be solid and without losing my movement, speed, just having more strength. I’ll continue with the same boxing ability, but with a little more strength and punch.”

Pedraza hasn’t fought since June, when he beat Julián Rodriguez by TKO in eight rounds.